Abuja, Nigeria – Ten years ago, Bala Iyah and his family left their home in the Nigerian capital of Abuja never to return. He says the Nigerian government forced him and hundreds of families to leave their ancestral homeland.

They resettled in another neighbourhood of the capital, Kpaduma. There was no running water and no electricity, but Iyah and the others had to make the place habitable.

“We were never compensated [for our land],” the 49-year-old farmer says. “[The government] just told us to go, and that’s why we are here now.”

Iyah and the Kpaduma community dwellers are among the indigenous people of the Nigerian capital. Nine ethnic groups, numbering at least a million, claim Abuja as their ancestral homeland.

Abuja was designated as the new Nigerian capital in 1976, replacing Lagos, which had become highly congested and over-populated. It was considered an ideal alternative because of its central location and the fact that it did not belong to any of Nigeria’s three largest ethnic groups: Yoruba, Igbo and Hausa-Fulani. As such, it was perceived as a neutral area that wouldn’t cause any unrest.

Not a no-man’s land

But thousands of the original inhabitants of Abuja were displaced to make way for the construction of Nigeria’s new capital. Many of these people are angry at the way the only home they’ve ever known has been portrayed as a “no-man’s land”.

Under Nigerian law, the government can revoke land ownership from its citizens. Abuja indigenes say they are frustrated by what they see as an injustice.

After pressure from the residents of Kpaduma, the government provided them with electricity, which, according to locals, is intermittent. Open sewage runs through their yards, and rough dirt roads rise and fall on the crevices of rocky hills.

There is no hospital, the primary school is falling apart and the community is pleading with the government to build a secondary school. The community’s older children must trek several kilometres outside of Kpaduma to attend the nearest secondary school, crossing busy roads en route.

At least three youths from Kpaduma have died this year in road accidents on their way to school. Iyah says that the number of children in Kpaduma who have been hit by cars in the past decade is too many for him to remember.

‘Ready to take up arms’

Abuja indigenes pride themselves on their non-violent culture. They refer to themselves as a “peace-loving people”, but say that their ongoing displacement means they must become more aggressive in their protests.

“It’s now clear that the federal government has never given attention to unarmed citizens,” says Yunusa Yusuf, the spokesman of the Coalition of the Federal Capital Territory of Indigenous Groups.

“Now, our people have sworn due to the continuous marginalisation, deprivation and exclusion from the government, our people are ready to take arms if that is the only solution for dialogue.”

The members of the Coalition of the Federal Capital Territory of Indigenous Groups are planning to protest and demand that the government stop the forced displacement and compensate families for past dislocations.

They say they have sacrificed much to make way for one of Africa’s modern cities.

Today, Abuja is still expanding, rapidly. It is one of Africa’s fastest growing cities and property is a hot commodity. Across the city, building sites dot the landscape. Several high-rise buildings, shopping complexes and residential estates are under development.

Poor among the rich

“Yes, it’s true that we live among the rich, but we’re the poorest people ever,” says Yusuf.

Abuja’s original inhabitants traditionally made a living by farming, but the displacement has taken them away from their farmland. Now, they grow produce on smaller plots of land, conscious not to cut down trees protected by the government. Poverty and illiteracy among indigenous communities in Abuja is relatively high.

The city’s continuous expansion means more and more indigenous people are being pressured to leave their land.

Iyah may have to move, again.

He says government representatives come to Kpaduma these days to tell them they must leave.

“Without our knowledge, the government has allocated this place to individuals and now they are forcing us to leave without compensation. We were not even informed about their plans to take this place,” he says.

But Iyah says he will not move. He has no place to go, he says, so if need be, he is ready to fight. 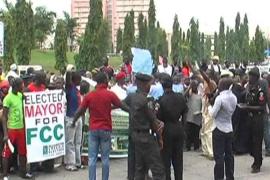 Indigenous group, upon whose land the nation’s capital was built decades ago, say they are still awaiting compensation. 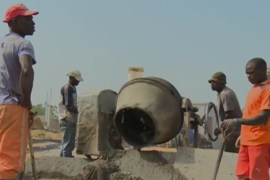 Despite a construction boom, the capital’s rents are among Africa’s highest, affecting the average person the most.