Lesbos, Greece – Before sunrise, 45-year-old fisherman Kostas Pinteris launches his small boat eastwards with a plan to drop his nets near the Greece-Turkey border in the Mediterranean.

As he leaves the port, he looks right and left, worried. Just a few hours ago, the attempted coup had kicked off in Turkey. Talk on the island was that the violence could lead to a new surge in refugees embarking for Lesbos.

“I remember I was a young boy, and I saw Iraqi men arriving on small rubber boats with paddles,” Pinteris says while pulling his fish-laden nets out of the water. “We wondered, ‘Why are these men here?'”

Like most of the people in this small and conservative village, Pinteris initially viewed the arrivals as an invasion. But now, in light of recent events, even some of the most hardened Greeks on the islands have changed their minds.

“After having experienced what we have this year, with women and children in the water screaming for help, many people’s world views have changed,” Pinteris says.

The small village of Skala Sykmias, home to 60 people where Pinteris was born and grew up, became the centre of the refugee crisis last year.

There was constant people traffic, from the more than 400,000 refugees landing on beaches near the village, along with the staff and volunteers of government and nongovernmental organisations who have been staying in the village for months.

In the peak of the refugee crisis, when there were so many operations taking place that the coastguard and Frontex, Europe’s coastguard, called Pinteris and other fishermen asking them to get out of bed and go to the sea to find a sinking refugee boat until one of coastguard boats could come to the rescue.

“We suddenly became an international centre, with people arriving from all over the world,” Pinteris says, leaving the little port behind.

“We never know what the day will be like. It’s really difficult. There’s a lot of stress. When you’re the only fisherman around, and there are people in the water everywhere around you, you panic,” he says.

Since the Greece-Macedonia borders closed in February and the European Union and Turkey reached a deal to relocate refugees soon after, Greece, within a few weeks, went from being a transit country to a host for refugees seeking security and jobs in Europe.

Some are slated to go back to Turkey while others are living in a state of limbo. It’s not clear where they will go now.

According to Ministry of Immigration press releases, more than 50,000 people who can’t continue their journey to Western Europe are now stuck in camps that were hastily set up all over Greece.

Another 9,000 are stuck on the Greek islands, with almost 4,000 of them staying on Pinteris’ island in two camps an hour-long drive from his village.

The government’s narrative quickly changed. In public statements, Prime Minister Alexis Tsipras and his cabinet began focusing more so on illegal immigrants and less on the asylum-seekers and refugees needing international protection.

From helping the refugees, the discourse is now focused on border security and deportations.

Lesbos islanders believe the shift means their islands will be the ones taking on the “burden”. According to the Lesbos Hoteliers Association, tourism has gone down by 40 percent as tourists were discouraged by videos of beaches full of life vests. For months, fishermen couldn’t work because they were preoccupied with rescue missions.

“I didn’t carry any nets on the boat during the peak time of the migration crisis,” says Pinteris. “I had to put people on the boat. So I just went for calamari, where I don’t use any equipment. My work was down by 90 percent.”

In September last year, Greece’s nationalist party, Golden Dawn, increased its votes to 7.8 percent from 4.6 percent on the Lesbos islands, which received the refugees.

The perils of the journey

Anti-immigrant sentiments have become common among the islanders.

“We don’t know how many will come and where they’ll all fit. Otherwise, Europe will slowly turn into Asia,” Pinteris says sceptically. “The one million that crossed will bring another million, their siblings and other relatives.”

At the same time, however, Pinteris is torn about what should happen. He can’t imagine that Europe will deport people to Turkey after they’ve gone through such perils in their journey to Europe.

“I’m not afraid because these people want to live,” he says. “They want to survive. If there will be peace in their countries, I believe they’ll return.”

Returning to the port, a dozen stray cats greet Pinteris. “My most loyal clients,” he says, throwing them some fish.

“I can’t say I’m a hero because I helped save people,” he reflects.

“I simply extended my hand. They also have a right to live. But I’m more sad for the young children. They can’t understand what’s going on. At least the grown-ups chose to make the crossing, but not these young children.” 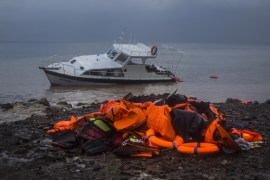 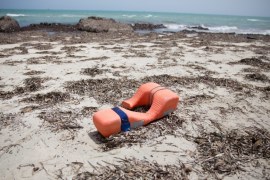