Rio de Janeiro, Brazil – “Is there still space in the Maracana? So many people,” says Eliezer Gomes de Andrade, marvelling at the Olympics participants arriving at the stadium from the TV screen in the corner of the room.

A Brazilian flag hung below the screen and was surrounded by fairy lights and a homemade Olympics rings made from hula-hoops.

Andrade has lived in Pereira da Silva favela – that overlooks the Maracana stadium – in Rio de Janeiro for 40 years, and watching the opening ceremony of Rio 2016 at the community restaurant, he was proud.

“I loved the samba,” he says. “I’m very happy to see the Olympics. I’m proud of Brazil.”

The day of the opening ceremony, as well as the run-up to it, had been fraught with protests against the current interim government and the costs associated with hosting the Games during a time of recession and economic instability.

The event has fallen in a political, social and economic chasm in Brazil. Putting on the show has been equally polarising.

“There are divided opinions. Fifty percent are in favour and 50 percent are against it. It’s done lots of good things for Rio and for Brazil, and it’s going to shut a lot of people up afterwards. Everyone is complaining now, but afterwards, everything will be better.”

Andrade, who is self-employed, sat at the back of the room, staying up to see the finale and enjoying the sight of every country’s athletes entering the famous football stadium just a few miles away.

The day in the favela had started with a parade by schoolchildren from the Favela Brass music school through the community, drawing residents out of their cinderblock homes into the narrow alleys to see a samba version of Chariots of Fire.

Tom Ashe, the British founder of the school, says there was an acceptance within the community that the Olympics were out of reach for favela residents, but he was determined to give his pupils the experience of participating.

The children from one of the marginalised communities built on the hilltops of Rio made their way through the winding streets towards the ABCD restaurant, which was opened by Claudio Pereira das Chagas Ferreira, 46, to take advantage of the World Cup in 2014.

In the evening, Chagas opened his doors to welcome locals and tourists to watch the opening ceremony while a group gathered at an open-air cafe on the corner of the street, drinking and watching it on a portable TV set up on the bar.

But the event was far from a shared moment for the community. The majority of locals stayed at home while Chagas had already had his fill of partying after celebrating his birthday the night before.

“There are two parts to the Olympics,” Chagas says. “They didn’t open it up for the city. For me, and for many others, the Olympics is good, but there are other concerns. We expected more from the Olympics. There is little legacy.”

Pereira da Silva is one of the communities that has benefited from improved security after years of gang conflict. That has allowed it to open up to tourism.

Chagas says it had once been very dangerous, with regular exchanges of gunfire. There are now four guesthouses in the favela and Chagas seized on the opportunity that was the football World Cup two years ago to add to the community.

“We embraced this. We don’t promote the restaurant beyond the community. It’s just word of mouth,” he says.

“It’s a mixture of good and bad. For me, I’m excited. The World Cup was really good. It was in Brazil but it was good for Rio de Janeiro, as well.”

For others, there remains a disparity between those enjoying the Games and the rest of the city.

Among those at this restaurant was Natalia Vicente, 26, from Sao Goncalo, a town in Rio de Janeiro state across the bay from Rio city.

“I don’t want to participate. Not because I’m angry, but I don’t feel part of it,” she says.

The opening ceremony had been better than expected, she says, representing different elements of Brazil’s diverse population, but felt it was the wrong time to host the Games in Brazil.

“The choice of host city was made at a different time,” she adds. “I really feel like they’re the games of exclusion. Many things have been done for the Games, but for the event, not the people. If I could have voted, I would’ve voted against it. But I hope it goes well.”

She says the atmosphere in Sao Goncalo was just as divided as in the host city.

“The majority are in favour of it; they think it’s beautiful,” she says. “And the spectacle is beautiful. Everything done for the Games is great, but it should be more.”

As the evening wore on, those watching drifted away from the restaurant.

Marcio Verissimo was among those who stayed till the end.

The 50-year-old was enjoying a rare beer, which he allows himself only at weekends.

The rest of the time, he follows a strict diet and exercises at least three times a week.

Sport was one of the few things that had the power to unite people, Verissimo says, adding that it was down to everyone to take responsibility for their own destiny.

“I see the Olympics as having a positive impact,” he says.

“When Brazil was chosen, it was bouncing. We have to take the opportunity to take good things from the event.”

He says the reception of the Olympics had been conflated with the political situation in Brazil, and while he acknowledged concerns about corruption linked to contracts for legacy projects, he says the Games had also opened up the city.

“After the Games, we have local elections. It’s time for Brazilians to act,” he says, adding he intends to take his daughters to see the Olympics cauldron, which has been placed in downtown Rio, and not in the Olympics stadium, for the first time in the history of the Games.

And Verissimo rejects the idea that people living in favela communities had been priced out of the Games, pointing to the cost of smartphones, which are prevalent even in deprived areas.

“You have the capacity to buy a 3,000 Brazilian reals [$947] mobile phone, but you can’t buy an Olympic ticket? You’re excluding yourself,” he said.

“My father was part of the residents’ association here, and he would get up to 150 people taking part. Now, you’re lucky if you get 10. People will spend four hours watching soaps on TV, but they can’t listen to a politician talking for 15 minutes.

“It’s down to us to take advantage. It’s a chance to learn about other cultures. Sport is the only mechanism in the world to unite people. Football is only a few dozen countries, but the Olympics is everywhere.

“We have to root for everything to go well.” 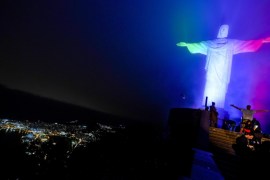 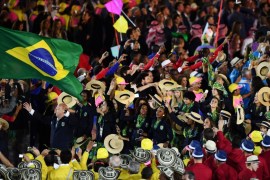 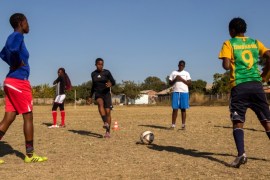