Outside a public housing complex in Brooklyn’s Bedford Stuyvesant neighbourhood, Ellisha Garner has set up shop on a folding table.

She waves and shouts hello to people on the street and a couple of men wearing uniforms stop by for lunch, a heaped plate of her jerk chicken, beans and rice and macaroni salad.

They stick around to eat on the sidewalk in the shade of a tree, sharing laughs and conversation.

“You can’t judge a book by its cover,” says Garner, whose main job is a city bus driver.

She says she sells food on the side because her neighbours love her cooking.

But she is perhaps best known as the sister of Eric Garner, whose face adorns her red apron.

Two years after his death at the hands of the New York Police Department (NYPD), she and those gathered around her feel little has changed in terms of their community’s relationship with police.

They feel disrespected, if not for the colour of their skin then for the poor neighbourhood where they live.

“You have to respect one another,” she said. “It don’t go one way.”

“I see on a daily basis police just stop people, frisk you for no reason,” said Tyrone Earl, who was buying chicken.

“You ask them, why are you stopping me? They just make up a reason.”

Under a court order and the leadership of outgoing police Commissioner Bill Bratton, the city has dramatically curtailed its aggressive “stop and frisk” style of policing that overwhelmingly targeted poor minority communities such as Bed-Stuy.

But the sense of resentment and mistrust it engendered remains strong.

And while violent crime in the city continues to decline, critics say it is coming at the expense of neighbourhoods such as this where the department still follows a “broken windows” model of policing.

The idea, championed by Bratton, is that going after low-level offences such as vandalism or, in the case of Eric Garner, selling untaxed cigarettes, helps to keep communities safer.

“This outmoded policing model of the 1990s is not effective,” says Donna Lieberman, executive director of the New York Civil Liberties Union.

“And thrusts millions of New Yorkers into the clutches of the criminal justice system.”

A man who identified himself as “Get Right” agrees.

He says he has been hauled before a judge on trumped-up charges and, while ultimately exonerated, has had to take time away from work and family to straighten it out.

“You play with people’s lifestyle,” he complained.

He believes the NYPD has improved under Bratton and worries that the Black Lives Matter movement, which Garner’s death helped to inspire, is now stereotyping all police.

“There are issues now where people are challenging the police, which is really bad for us all,” he said.

“We have to get back to the process of respecting the law and respecting individuals as human beings first and foremost.”

“Come around, get to know everybody,” she said with her nine-year-old son by her side.

“See who is who, what’s what and even if you see a couple of guys in the corner that you feel is disturbing, talk to them.”

It was just after the two-year anniversary of Garner’s death that Commissioner Bratton announced he was stepping down from his post.

His successor is expected to continue his policies.

The conversation about race and policing continues at demonstrations, on the campaign trail and in the national media.

But the two sides have yet to come together in this corner of Brooklyn. 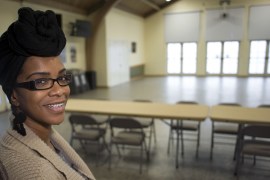 Race in the US: ‘I was tired of crying’

After seeing her friends killed in gang violence, one woman was inspired to take on the scourge of racism in the US. 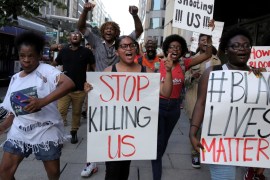