Aleppo, Syria – It’s around midnight and two rescue workers are engulfed in smoke, hosing down a fire in a burned out shop in Hanano district. Close to the frontline in the rebel-held eastern part of Aleppo, Hanano is often exposed to artillery fire and aerial bombings.

The body of an old man who was killed by flying shrapnel, lies on the pavement outside.

“It was a Russian aircraft,” says a passer-by. “The poor guy was crossing the street when the bomb hit.”

An ambulance arrives and tells the rescue workers that they will take care of the body. The White Helmets rescue team is desperate to get moving, yelling at their colleagues to hurry up and get in the truck.

The plane had returned after the first responders arrived and bombed the area a second time. Their colleague Ahmed Badr was hit, and the team now heads to the hospital, anxious to find out what has happened to him.

I lived and filmed with a group of rescuers from the Syrian Civil Defence, better known as the White Helmets, for 10 days last December.

The White Helmets began in 2013 as an ad hoc group of local volunteers in Hanano who would head to bombed places to try to save people.

But extracting survivors is a complicated and difficult task and in the beginning, despite their best efforts, they lacked expertise, which resulted in victims dying under the rubble. The first White Helmets received training in southern Turkey from Turkish earthquake rescuers, before heading back to Syria with equipment and uniforms, including their namesake white helmets.

They now work out of 119 centres in the liberated areas of eight western provinces (Aleppo, Idlib, Hama, Latakia, Homs, Daraa, Damascus and Damascus countryside) and have around 3,000 volunteers, including two teams of women. To date, these volunteers have saved over 60,000 lives.

The men on the Hanano team are aged between 19 and 33. Their routine is relatively simple. They have a “spotter” who communicates with the team by radio – when a place is hit, the team is alerted and guided to the right location.

Their work is psychologically gruelling; they witness death and risk their own lives almost daily. But the team is close, bonded by humour and their constant ribbing of one another.

The team races towards the hospital. After a five-minute drive, the truck stops in front of a large, nondescript concrete building.

As hospitals and health clinics have been bombed, they now operate in secret, makeshift locations. This clinic is in the basement of an apartment complex.

Inside, Ahmed, 20, is lying on a hospital table, chalk white and grimacing in pain. Six of his colleagues are anxiously gathered around him. A lump of shrapnel is in embedded in his leg but the doctors say it’s too dangerous to try to remove it – he could bleed to death.

“He’s lost a lot of blood, but he’ll be all right,” the doctor tells them.

Ahmed’s companions lift him from the bed, put his arms around their shoulders, and carry him out.

Back at their base, they lay him on a bed, and the room is quiet for a few moments. The guys are emotionally stretched – they‘re in shock, and the relief that their friend will live has not yet fully set in.

Then, gradually, the jokes start again. Someone lights a cigarette and gives it to Ahmed, and Subhi Hussein, the group’s comedian, smacks it out of his mouth.

“Not until you‘re healthy again,” he shouts. “Man, you can’t even handle a Russian bomb.”

But in the moments when the attention is elsewhere, Subhi’s smile disappears and a haunted look returns to his face.

The team has already lost four colleagues to these “double tap” bombings – Russian and regime airplanes frequently return and bomb the same place a few minutes after the first strike, seemingly deliberately targeting rescue workers. The White Helmets will often wait around five minutes to see if the aircraft returns. If it doesn’t, they head out despite the risks – if they wait too long, people might die. It is a gamble every time.

Over the 12 days that I spend with the team, they receive anywhere from two to 12 call outs in a day.

On one occasion we drive to a place that has been hit by a barrel bomb. These bombs are made from propane tanks and empty fuel barrels filled with explosives and pieces of steel. The impact can cause entire concrete apartment blocks to collapse. It’s difficult to aim with them, but in this conflict that doesn’t seem to matter.

As we pass, people on the streets recognise the White Helmets’ old red fire truck.

“Where? Where is it?” shouts 19-year-old Muhammed “Meshko” Lawez, as he hangs out of the door. Men, women and children point them in the right direction.

When we arrive, Meshko and the others run out looking for survivors.

“Anybody here?” they shout, while searching through the dusty rubble.

After five minutes, they are certain that the building was empty when it was hit. They head back to the base.

On another day, a mortar lands on a car in a residential street. They can hear a woman screaming in a nearby house, but the conservative family won’t let them in.

The day after, they charge out to a neighbourhood that has been bombed twice. A family emerges from the building covered in dust. In the next street, a man has been killed.

On other days, they head out to find buildings in ruins, but miraculously, no one has been killed – much of Aleppo is deserted, and entire neighbourhoods in the most heavily shelled areas stand empty.

While out on patrol on one occasion, the team stops by the local cemetery to visit the graves of the four colleagues they have lost.

Shahoud spends a quiet moment by the grave of his friend, Mahmoud. He explains that Mahmoud was killed while responding to a bombing. The aircraft had returned 15 minutes after the initial bombing and had dropped a second bomb on the rescue workers. Across Syria, 134 White Helmets have been killed and more than 400 have been injured in the line of duty.

Life on the base

Back at the yard of the base, Ahmed Kurdi, the spotter, tends to the neighbourhood cats. With so many families having fled abandoning their pets, the White Helmets’ yard is full of cats who come for the food Ahmed lays out for them.

Whenever the team rushes to the bomb sites, Ahmed stays behind. In a quiet moment he shows me a picture of himself bandaged and comatose in a hospital bed.

“I was shot by a sniper during an incursion by government forces. I dragged myself off the street, and into a basement to hide, but the soldiers found me there and stabbed me, leaving me to die,” he says.

He can no longer do physical work, so he works as a spotter. He hasn’t seen his family, who are in Turkey, for three years, but he says he stays for the job.

On a quiet evening, Abdul Qader, the driver, gets a visit from his daughter, Walla, aged six, and son, Zacharia, aged three. As the mortars fall in the distance, the men play football with the children and let them wear their helmets and play with their gear. Later, they race an old motorbike, which one of the crew has just bought, around the courtyard.

When it’s dark, they go inside to watch television. The Islamic State of Iraq and the Levant (ISIL, also known as ISIS) and Assad dominate the news, and the team talk politics.

“ISIS says we’re apostates,” says Shahoud Hussein, the group’s leader and Subhi’s twin, “and Assad says we’re terrorists. We can’t leave Syria. If all the good people flee as refugees, then who are we leaving the country to?”

Shahoud is one of the earliest members of the White Helmets in Aleppo. Like the others, he had a normal job before the war broke out – he used to own a home decorations store.

He has seen colleagues, friends and small children die. Death is part of daily life now, but he says he will never give up his values.

Shahoud says that he never wanted to join the rebel groups or the army.

He deplores the sectarianism that has destroyed his country and says he still considers the civilians living in government-held areas to be his brothers.

Shahoud sits quietly in the background. He‘s a friendly man, always smiling, but now sweat runs off his forehead and he stares blankly into space.

Everybody has lost colleagues. The older ones are particularly afraid of losing the younger men – they see them as brothers they are responsible for.

Some of the team members’ families still live in Aleppo, and some have moved them out of the city to safer places. Shahoud’s wife and children live in rural Aleppo. His wife, scared of losing him, still pleads with Shahoud to stop working as a White Helmet.

“It’s really tough for her,” he says, sighing.

“But it’s my duty to save these people. If I don‘t, who will then do it? If the worst thing happens and I die, at least I know that my children will be proud of me and know what I stood up for. ”

Later that night Shahoud unfolds his prayer rug and starts his evening prayer. It is even more heartfelt than usual.

Today, eastern Aleppo is almost under siege. It is difficult to get food and other basic needs into the city.

Pro-government forces and rebels are still fighting and if one side loses the battle, either the 300,000 civilians in eastern Aleppo or the 1.2 million in western Aleppo will be cut off from food and aid. The main supply routes have been cut, and the price of food, medicine and fuel is soaring.

In April, a member of the team, Shabaan, a quiet 23-year-old, was killed by a mortar.

The others have continued to work under increasingly dire conditions as Russian and government aircraft pound Aleppo‘s neighbourhoods with upwards of 50 bombings every day.

Meshko told me that the team were devastated by Shabaan’s death, but they remain determined to continue their work. 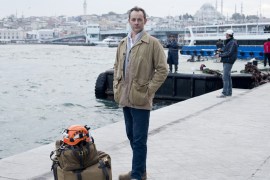