I vividly remember the first time I visited Karada, the popular shopping district in the heart of Baghdad that was struck early on Sunday by a devastating ISIL-claimed bombing, in 2013.

I had been in the Iraqi capital less than a week when the reports came through to our office about a suicide bombing at a local cafe. Along with my producer and cameraman, I raced down to the site.

IN PICTURES: Devastating scenes of carnage in Karada

The cafe was on a corner just off the the main strip. There was blood on the floor and twisted metal strewn around the vicinity. The crunch of shattered glass under our feet made an uncomfortable noise.

I spoke to people who had witnessed the attack and felt their sorrow.

Over the years, that sorrow seems to have been replaced by anger as Iraqis continued to experience similar attacks – not just in Baghdad, but all over the north, west and centre of country.

A year later, I was once again in Karada for the aftermath of another bombing.

A young man approached our crew and showed us his injuries from the bombing. In Arabic, he talked furiously about how the government was doing nothing to protect residents.

He reserved his particular ire for the checkpoints, where soldiers would use bomb detectors to look for explosives.

Those bomb detectors are commonplace across Iraq. They are hand-held and look like a cross between a ray gun from a cheap science fiction film and divining rods used to look for water.

They are also equally useless.

They were sold to Iraq by a British businessman who took a golf ball finder and repackaged it as the latest and greatest in security technology.

The golf ball finders got a fancy new name, “The ADE-651” and thousands were sold to Iraq as the cure to the country’s security problems.

Except, of course, they didn’t work.

The British businessman behind the scam was jailed and is currently spending 10 years in a UK prison.

I asked a senior Iraqi army officer why the golf ball detectors were still in use despite the fact they didn’t work.

Shrugging his shoulders, he said: “Our soldiers need something to do at checkpoints”.

People getting on with their lives

So much blood has been spilled that Iraqis no longer seem to show sorrow at such attacks but anger.

When Iraqi Prime Minister Haider al-Abadi visited the site on Sunday, he was booed and his convoy was attacked.

I have been away from Iraq for a few months now, but watching the images on TV and reporting on the attack from Doha I have monitored the situation closely.

On social media, people have been posting pictures of the victims. They are all civilians just getting on as best they could with their lives.

The Islamic State of Iraq and the Levant (ISIL, also known as ISIS) claimed responsibility for this attack, saying they targeted Shia Muslims who they consider not to be Muslim at all.

Yet, if you play that game, I wonder how you justify calling yourself a Muslim, killing innocent people in Islam’s holiest month and on the eve of the holy celebration of Eid? A question that ISIL seems to have sidestepped.

But Karada residents aren’t just blaming that armed group. They also blame their own government for constantly failing them.

In among the pictures of the site, I thought I spotted a stall, or rather the burned out remnants of a stall.

I would pass this little market stall a lot. It sold giant – and I mean half the size of an adult – bags of crisps. The crisps, or chips, as they are called in Iraq, were homemade and sold in open, clear plastic bags.

It’s such a silly thing to remember about Karada, but in a way it reminds me that the victims of this attack were ordinary people with a taste for junk food.

I never bought a bag of the chips. I wish I had now.

The Iraqi prime minister ordered a complete overhaul of checkpoint security, including getting rid of the golf ball detectors – even though it is debatable how much of a difference that will make.

For now, I stare at the pictures from Karada and only hope that one day Iraqis can eat chips, go shopping, watch TV in cafes in peace. 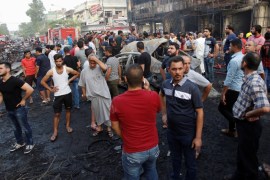 Anger grows as Baghdad residents accuse Iraqi government of failing to protect them after ISIL attack kills over 200. 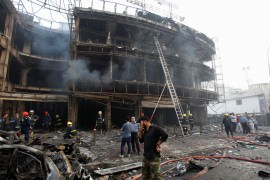