Beneath the striking sandstone massif of the Waterberg Plateau lies a walled graveyard and an ornate monument commemorating German soldiers who fell in battle against Namibia’s Herero people.

Fuelled by land disputes, the so-called Battle of Waterberg on August 11, 1904, marked the beginning of a what Namibians are calling a genocide that left an estimated 65,000 Ovaherero, or Herero people, and 10,000 Nama dead at the hands of the Germans by 1909. Around 2,000 German troops were killed during the same period.

In a corner of the expansive Waterberg graveyard, a small, hidden plaque serves as an afterthought to honour the fallen Ovaherero.

“Namibia is now in the process of setting up a multitude of monuments to modern-day heroes, but there is still not a single monument to the Hereros – nothing about our ancestors who actually started the liberation struggle,” he points out.

With formal negotiations concerning the recognition of a genocide now under way between the German and Namibian governments – due to be concluded by September 2017 – Germany’s legacy in Namibia is becoming an increasingly contested battleground. The impatient calls for redress for this dark and neglected chapter of history are getting louder.

Earlier in June, German Ambassador to Namibia, Christian Schlaga, speaking on behalf of the German government at a commemoration event, said, “We know that those bitter and painful events of more than 110 years back are still causing pain today and that they cast a shadow over the relationship between Germany and Namibia.”

Most recently, at the beginning of April, hundreds of Ovaherero marched through the streets of Swakopmund, a Namibian seaside resort town still marketed to tourists as a “little Germany“.

The protesters carried placards that read: “We are still in chains”, “Remove all Nazi monuments”, “We want our land” and “Germans, you will pay”.

Many of the women were dressed in the distinctive floor-length gowns that the Herero adopted from the German missionaries a century before, while the men, some on horseback, wore military fatigues in honour of their fallen ancestors.

A prominent German colonial monument was defaced with red paint during the march.

For more than a decade, various Ovaherero and Nama activist groups, in Namibia and across the diaspora, have been campaigning tirelessly for Germany to pay reparations for the mass killings.

Kansas-based Ngondi Kamatuka is a descendant of the victims and the head of one such group: The Association of Ovaherero Genocide in the United States.

“The wound of dehumanisation and brutality that the Ovaherero and the Nama people suffered at the hands of Imperial Germany has never healed, and it will never heal until justice is done,” Kamatuka says. “The Ovaherero lost their property and land. Genocide destroyed their culture and language.”

Those Herero who survived the battlefield in Waterberg were subsequently hounded into the desert, where many died of starvation and thirst.

Survivors were rounded up and thrown into concentration camps. There, they were used as slave labour in the rapid construction of a new, prosperous German South-West Africa, as Namibia was then known.

The Ovaherero were soon to be joined by the Nama, who came to the anti-colonial fight some months later. Thousands of Ovaherero and Nama died in the camps due to poor living conditions.

The systematic rape of Herero and Nama women was also routine. A living testament to this, Kamatuka has German blood on both sides of his family as a result of sexual abuse.

“The abuse that took place is a permanent stain on the soul of the Ovaherero,” he says.

In a final insult, Herero and Nama corpses from the concentration camps were reportedly decapitated and their heads boiled and scraped clean of flesh. Their own people, sometimes their own relatives, were forced to carry out this work.

Then the skulls were sent to German museums and universities to be put on display, or to be used by scientists in support of dubious racial theories that would later shape Nazi ideology.

Over the next decades, up until Namibia’s independence in 1990, the history of the massacre was swept under the carpet by both the German colonial administration and the subsequent South African apartheid regime.

The former concentration camp on Shark Island, where thousands of bodies were thrown into the sea, is now a state-run beach resort frequented by sun-seeking holidaymakers, most of whom remain oblivious to the island’s former use.

“If you looked, you could literally pull the bones of our people out of the sand beneath your feet,” says the Paramount Chief, Rukoro.

‘Genocide defines who we are as people’

Today, the descendants of the Herero and Nama victims remain a dispossessed and disempowered minority in their own country.

Many, like Kamatuka, left Namibia long ago and have never returned.

Meanwhile, the Hereros’ expropriated ancestral lands are still owned by a few thousand German farmers descended from the perpetrators of the killings.

“Land for the Herero constitutes the very existence of life,” says Rukoro. “Our people were robbed of their land and reduced to perpetual poverty, which became institutionalised through generations.

“That’s what has become our heritage today. Genocide defines who we are as a people.”

But according to the American author and journalist Mari Serebrov, whose historical novel Mama Namibia is based on the true story of a young girl who survived the Namibian massacres, the greatest injustice of all is that more than 100 years on, Germany has refused to officially acknowledge the genocide.

“Not only Germany, but the rest of the world has ignored the fact that Germany intentionally set out to exterminate the Herero and Nama,” Serebrov says.

“As of June 2, more than 20 countries, including Germany, have officially recognised the 1915 Armenian Massacre in the Ottoman Empire as a genocide. But none of them has recognised the 1904-1909 genocide of the Herero and Nama in German South-West Africa.”

German Left Party MP Niema Movassat told Al Jazeera that Germany’s failure to recognise its own alleged genocide in light of the Armenian decision is “embarrassing”, and primarily motivated by legal fears rather than moral or political ones.

“When we accept the Namibian genocide, we have to pay reparations. The German government fears having to pay money to the victims, and they have said as much,” Movassat said.

Even now that official negotiations in Namibia have finally begun, the victimised minority groups and their representatives have been summarily excluded from the process, with Germany insisting on dealing solely with the Namibian sovereign government.

According to Serebrov, “That makes as much sense as letting a rapist decide if he has indeed committed a rape and then determine what, if any, penalty he should receive.”

“Our exclusion will allow a deal where Germany does not have to pay any reparations at all, but will agree to increase its development aid to the Namibian government,” Rukoro says.

“So this way, it’s good for them and for the Namibian government and its budget; but there will be nothing in it for the Ovaherero and the Nama people. Whatever agreement is reached between the governments while we are excluded, it is a non-deal.”

Movassat’s party has also expressed doubt about the ability of the current reconciliation process to bring a “lasting satisfactory solution recognised by all parties.”

With this in mind, the Ovaherero Traditional Authority (OTA) that Rukoro leads has been pursuing other avenues, and in May announced that it will be taking Germany to the International Tribunal in The Hague.

Rukoro says the OTA will “very soon” be approaching a private law firm in the United States with further lawsuits against both the German government and various German corporations that also built their empires on the back of Namibia’s concentration camps.

As the Ovaherero Genocide Committee secretary, Nokokure Kambanda Veii, states emphatically: “We are fighting for what is ours with all means possible and will not give up until Germany pays.”

Of what such a payment would entail, Kambanda says: “For a starter, Germany should provide funds so that the Ovaherero and the Nama people can regain their traditional land by buying it back from the German farmers.”

But reparations for the massacres are about more than funds. Rukoro says that they would also have to address education, health, and various social deficits that the Herero and Nama have suffered over generations.

“The Germans must take ownership of their past wrongdoings,” the chief says.

The German government has thus far ruled out direct financial compensation to the Herero and Nama.

According to Martin Schaefer, spokesperson for the German Foreign Ministry, the primary aim of the negotiations at this stage is to “agree on a common assessment of the terrible past.” He adds that this will serve as a basis for future projects that offer “development prospects” to the “descendants of those who so terribly lost their lives.”

While Schaefer says that the negotiations are “fairly advanced”, he says they are being hampered by “internal political pressure” from Herero and Nama groups.

According to Serebrov, there is much more at stake for Germany in the ongoing negotiations.

“For decades, Germans have distanced themselves from the horrors of the Holocaust by blaming it on Adolf Hitler and the Nazis,” she says.

“Acknowledging that Germany was to blame for another genocide 40 years earlier would force them to look into the very soul of their ethos.” 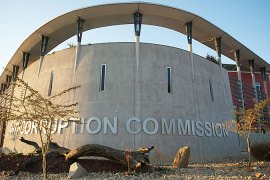 President’s daughter named among those that may be benefiting, but anti-graft agency chief says there is no evidence. 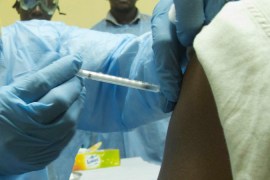