Ton Pheung, Laos – From the Thai side of the Mekong River, the Kings Romans Casino shimmers like a scene from a fairy-tale, its domes and turrets rising up against a backdrop of foliage-covered mountains.

Up close, Greek columns and classical statues flank a grand entrance where SUVs unload groups of visitors in the tropical heat. Inside, sitting around tables, gamblers bet wads of Chinese and Thai currency in air -conditioned silence.

Kings Romans is the glitzy centrepiece of the 10,000-hectare Golden Triangle Special Economic Zone, a joint venture between the Laotian government and the Hong Kong-registered Kings Romans Group.

Since signing a 99-year lease in 2007, Kings Romans says it has spent hundreds of millions of dollars transforming this remote corner of northern Laos into an oasis of hotels, shops, massage parlours and banquet halls, all dominated by the casino’s colossal golden crown.

According to local press reports, Kings Romans plans to add shopping malls, industrial zones, and an international airport, all in the hope of boosting economic growth in this impoverished nation of seven million. But critics say the enclave – three times the size of Macau – has instead become a semi-lawless zone where gambling (the legal status of which is ambiguous as there is a ban on “forbidden gambling”), prostitution, and other illicit trades flourish.

While the area remains under the nominal control of the Laotian government, which reportedly holds a 20 percent stake, its exact status is difficult to pin down.

“It’s not transparent at all,” said Stuart Ling, an agricultural consultant who has lived and worked in the area for 17 years and has witnessed the project develop since 2007. ” Nobody collects statistics on it. It exists as a special zone, a special entity.”

Sitting at the heart of the Golden Triangle, the point where the borders of Thailand, Laos, and Myanmar converge, the Kings Romans Casino attracts hundreds of visitors each week from mainland China, where gambling is banned outside Macau. Most come by road from the Chinese province of Yunnan, or fly to northern Thailand and cross the Mekong on speedboats operated by Kings Romans.

Despite sitting in Laos, the zone has the feel of a Chinese enclave transplanted into the tropical hills. Gamblers count the hours in Beijing time, one hour ahead of Laos. Mandarin is the lingua franca, and few shops accept the Laotian kip.

“Many people come to the casino … there’s very good money here now,” said Macky Sutthivong, 30, a Lao souvenir seller who works in the Special Economic Zone. While visitors come from Laos, Russia, Thailand, and Myanmar, he said, “the number one is China”.

Both the economic zone and Kings Romans Group are headed by the entrepreneur Zhao Wei, who hails from Heilongjiang province in China’s icy northeast. After years in the timber business, Zhou went on to operate casinos in Macau, where he holds permanent residency, and in Mong La , a notorious gambling enclave run by a rebel armed group on the Myanmar side of the Golden Triangle.

Zhao has high-ranking friends in the Laotian government. Senior officials have paid visits to the Special Economic Zone, including former President Choummaly Sayasone, who is pictured with Zhao in a Kings Romans promotional magazine available in the casino lobby. Several ex-government officials also sit on its management committee.

Representatives from Kings Romans declined a request for an interview and did not respond to repeatedly emailed questions. But in a wide-ranging 2011 interview with Chinese state media, Zhao said he was inspired to invest in Laos by the flame-flowered kapok trees which grow in the area (in Mandarin, the company’s name is Jin Mumian, or “golden kapok”). He said his aim was to “make this piece of wild, barren land full of a new vitality of life”.

Paul Chambers, director of research at the Institute of Southeast Asian Affairs in Chiang Mai, Thailand, said that in exchange for much-needed Chinese capital, the government in Vientiane, the Laos capital, appeared happy to cede a measure of sovereignty over the area.

“They’re hoping that the Chinese will bring some development to this faraway tract of territory in Laos,” he said.

In reality, the Special Economic Zone’s semi-autonomous status has allowed a certain type of tourism to flourish.

In an elaborately decorated “Chinatown” district behind the casino, Chinese sex workers ply their trade in nightclubs and “massage” parlours, a practice that is illegal in both Laos and China; cards advertising their services can be found scattered around town.

Environmentalists allege that the area is also home to a flourishing market in endangered animal products.

In a 2015 report, the London-based Environmental Investigation Agency (EIA) described the zone as “a lawless playground” and a free-for-all “illegal wildlife supermarket”.

The report described wildlife boutiques stocking items such as ivory and tiger skins, and a restaurant that sold tiger meat and Hu Gu Jiu – tiger-bone wine – from a liquor-filled tank holding a complete tiger skeleton.

Debbie Banks, a senior campaigner at EIA, said that many of the animal products, banned under international wildlife agreements such as CITES, the Convention on International Trade in Endangered Species of Wild Fauna and Flora, were imported by Chinese traders from Mong La, a long-standing centre of the regional wildlife trade.

She said both zones were an example of the worrying trend of “wildlife-trade tourism”, in which Chinese tourists travel to neighbouring countries to buy rare animal products which are illegal or hard to get at home.

“Laos has such weak enforcement and capacity and political leadership on this that it has become a safe-haven for wildlife criminals,” Banks says.

One-party Laos remains one of the most secretive countries in Southeast Asia, and recently came under fire for further tightening its restrictions on foreign journalists. This journalist was refused official press access, and was unable to put these allegations to Laotian government officials.

But in March 2015, shortly after the release of EIA’s report, Laotian authorities conducted televised raids on four businesses selling illegal wildlife products in the Special Economic Zone, burning more than $12,000 worth of ivory and tiger skin.

Shi Feng, the Chinese restaurant owner, admitted that his God of Fortune Restaurant once sold wild and exotic animals, but said the practice had now been curbed.

“Before they didn’t have laws. Everyone bought them, even the Lao people ate them,” he said in an interview at one of his restaurants in Vientiane. Now, he said, “we must follow the Lao law”.

At the time, Chanthachone Wangfaseng, vice-chairman of the zone and a former provincial official, told Laotian TV that the owners of the businesses “might not be familiar” with wildlife regulations, which would henceforth be enforced rigorously.

“The goal of our development is to build tourism and protect the environment,” he said.

One manager at the Kings Romans Casino, who requested anonymity because he wasn’t authorised to speak to the press, confirmed that the authorities had “shut all of that down”.

Many of the wildlife boutiques and restaurants indeed seem to have closed – but not all. At the side of the Xinxing Nenyuzhuang restaurant on Laos-China Friendship Street were cages filled with monkeys, geckos, an owl, and an endangered Asiatic golden cat, all of which a restaurant worker confirmed could be cooked to order.

Not far away a shabby “zoo” contained around 30 tigers in small enclosures, near a banner that read, in Chinese, Lao and English: “Safeguard Ecological Security.”

The casino manager claimed that the animals were simply kept as zoo attractions, but EIA alleges that tigers held in the zone are destined to be harvested for their skins and meat, as well as for tiger-bone wine, which is still advertised in the Kings Romans’ promotional magazine.

“As far as we’re aware, trade has not stopped. It continues, but it may be more under the counter,” Banks says.

Jeremy Douglas, the Bangkok-based regional head of the United Nations Office on Drugs and Crime who visited the zone on an official tour in February, said that Laotian police appear to be present in the area, in addition to security personnel employed by Kings Romans, but that it is “unclear to us the extent that the police are active”.

Douglas said that semi-autonomous enclaves like the Special Economic Zone and Mong La in Myanmar remained “grey areas” for law enforcement. “They’re so close to here, but so far away, so off the grid,” he said.

Macky Sutthivong, the souvenir seller, said that despite many locals benefiting from the influx of tourist dollars, he is worried that his government’s support is creating “a little China” on the Mekong. “They want to get more people from China,” he said. “They want this area to be a Chinatown permanently.” 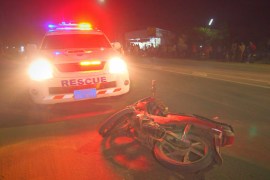 A volunteer ambulance service is struggling to save lives in Vientiane as traffic-related deaths and injuries soar. 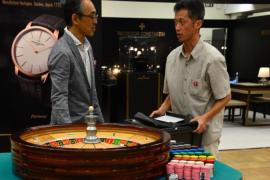 Is casino gambling a safe bet for Japan?

In conjunction with a booming tourism industry, Japan has set its sights on allowing casinos in time for 2020 Olympics.