Istanbul, Turkey – Thousands of people continue to pour into Taksim Square claiming victory over a failed coup attempt in the same spot that one week prior they faced off with soldiers trying to end President Recep Tayyip Erdogan’s elected government.

Syrian and Libyan rebel flags waved alongside Turkish ones as demonstrators in the government mobilised nightly protests and tried to link their confrontation with the military to the 2011 Arab revolutions.

“We may be from different sects and religions, but when attacked from outside, we have to be like a clenched fist,” Zechariah Yapicioglu, the leader of Turkey’s Islamist Free Dawa Party told the boisterous crowd of Erdogan loyalists on Friday.

While some attempted to present a sense of unity, Turkey is experiencing deep divisions as the government continues to purge those it accuses of involvement in the failed coup earlier this month.

Late on Wednesday night, elated crowd of thousands in Taksim cheered and jubilantly waved Turkish flags as Erdogan appeared on Teleprompters to declare a state of emergency. In a place where similar numbers of people protesting the government have been regularly beaten and tear-gassed in recent years, pro-government opponents of the coup attempt embraced the purge, knowing they had nothing to fear.

Well into the early hours of Thursday morning, government supporters reveling in the officially announced state clamp down drove through upscale, liberal, opposition neighbourhoods to loudly celebrate the emergency measures as a victory. Since people took to the streets to confront an attempted military putsch against the elected government, the mood has changed from defending democracy in the streets to encouraging widespread repression by the civilian administration.

As people continued to gather in Taksim, rousing chants rip through the crowd declaring Erdogan – whose government has encouraged supporters to arm themselves against future coup attempts – “commander-in-chief of the people”.

“This is our second war of independence,” booms a speaker on the towering stage to the ecstatic flag-waving crowds of supporters below. There is a concerted effort by the ruling AK party to rebrand Erdogan as a new father of the nation, blending the nationalist image of Turkey’s modern founder Kamal Mustafa Atatuk with the older religious values of the Ottoman Empire.

“I don’t see any issue with celebrating the defeat of the coup, but I have never seen people gather to celebrate a state of emergency,” says Basak Cali, an associate professor of international law at Istanbul’s prestigious Koc University. She is a specialist in state of emergency law and trains Turkish judges and prosecutors in the European Convention of Human Rights, which the government suspended on Thursday.

In a purge that has jailed, detained or fired more than 15,000 people so far, spreading from the military to the police, judiciary, civil service, public schools and the academy, Cali and her colleagues now find themselves targeted by the system that they study.

“At the moment you don’t know who will fall into this net,” an exhausted Cali says between drags on her cigarette as she sits in a cafe on a quiet side street off of Istanbul’s famous Istiklal Boulevard. “It’s very worrying.”

Just prior to the announced emergency state, the government recalled Turkish academics abroad, barred professors from traveling for work, and demanded the resignation of the country’s university deans – opening them up to potential criminal investigations.

Al Jazeera reached out to more than a dozen professors and their unions to discuss the current climate, but they either didn’t reply or declined to speak on record, even anonymously, because they feared reprisals. Yet, Cali has a different approach and sees moments such as now as especially crucial for intellectuals to raise their voice, and human rights lawyers to defend the rule of law.

Highlighting the sweeping crackdown since Saturday, she notes that in many ways the state of emergency procedures were already being used before it was officially declared.

“Perhaps some of the things they were doing before, that were illegal, will now be legal,” she says.

The young and intense but soft spoken professor depicts the process of curtailing freedom of speech and academic freedom as not only starting since the coup failed, but dating back to Turkey’s resumption of hostilities with its Kurdish population last summer.

Cali describes how it was the arrest of professors who signed a petition calling for peace in the country’s southeast that first created a stifling atmosphere of fear for academics.

READ MORE: Turkey – United against a coup, divided on the future

“I helped organise a protest in front a prison where academics [who signed the petition] were being held in pretrial custody, but not a single academic came out to support their colleagues,” she recalls. “They sent private letters of solidarity to me, but were too scared to come out,” she adds, describing how it was just students with her at the protest.

Still, Cali is quick to point out that Turkey’s state of emergency will further deteriorate people’s human rights and civil liberties, such as due process and freedom of expression.

In Turkey’s State of Emergency Act, the country’s already restrictive media regulations become even harsher. Local journalists have regularly been jailed for “insulting the president” or “supporting terrorism” because of what they have written in recent years, but the act declares that the state is now able to throw “anyone who spreads or conveys false or exaggerated news or information with intent to create panic among the public” in prison for a least a year.

However, Cali argues that the core problem with these measures is the lack of regulation on the government and security forces in applying the restrictions. She points to a lack of oversight or accountability measures to prevent the state’s blanket targeting of all of its critics. Acknowledging the government has the right and obligation to protect itself from another military coup, she also alludes to the far-reaching extent that these measures allow for a climate absent of transparency.

“We have to be concerned because who is going to enforce that the state of emergency is proportional to the threat. We don’t know what the threat is, or if the response will [be] proportional.”

For Kurds in Turkey’s southeast, there is growing fear that they will be the next target of the purge once Erdogan successfully represses the Gulenist movement, his former alley that he has accused of being at the centre of the coup. For the last year Kurds have been mired in a war with the state that has brought uncompromising military punishment on civilians and rebels alike, and a suppression of their rights under blanket police crackdowns.

Speaking on the phone from the southeast city of Diyarbakir, Azad, an activist with the predominantly Kurdish trade Union DISK, worries that emergency powers will further repress Kurds in a city that is already at the centre of a bloody security force clampdown. Declining to use his real name out of fear of reprisal, he contends that the difference between Kurds in the southeast and Turks caught in the purge’s widening net is that Kurds are used to being the target of an unrelenting state.

He, nonetheless, describes a change in the streets since the failed coup, where a handful of pro-Erdogan demonstrators are emboldened in the staunchly Kurdish nationalist city, guarded by the same police that violently break up pro-Kurdish protests. Under what he depicts as an expanding police presence in the streets, he says demonstrations for Kurdish rights have stopped.

Azad sees the national state of emergency as writing on the wall for the country’s Kurds.

“It will turn to us,” he says about the purge and emergency measures with a sense of foreboding. “Everyone will find themselves in a worse situation.”

Government officials did not respond to repeated requests for comment. 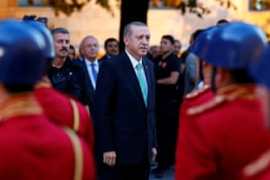 In his first decree under new state of emergency laws, Erdogan moves to close schools and extend legal detention time 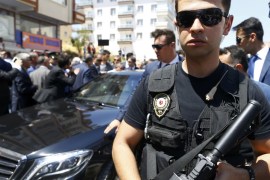