Peshawar, Pakistan – I had refused to believe that a cultural festival would be headline news. But Shafaq was insistent that we go.

“What about the story of children being given drugs in the refugee camp?” I asked again, hoping to join her on a report with more action. She shook her head: No.

I had been in Peshawar for just 24 hours and was shadowing Shafaq, a local radio reporter with the Tribal News Network. In my mind, a cultural festival was about as exciting as reporting on a school fete. But I was aware that I was cramping her style. My entourage included two armed guards with AK-47s, so we were hardly inconspicuous.

Shafaq’s job is difficult enough. In traditional Pashtun society, women are generally not allowed to leave the home, let alone be reporters.

Shafaq has to seek permission from her parents each time she wants to cover a story. Even if her father agrees to it, her brother or uncles might try to stop her, and the neighbours always gossip that she works in an office with men and gets home too late at night.

Her colleague, Khalida, the most popular voice of the Tribal News Network, went on a hunger strike just to convince her father to allow her to study journalism.

I decide not to push the point. So we go along to the heavily fortified gate of the cultural festival at the Peshawar “Planetarium”, a disused, dome-shaped building in the suburb of Hyatabad. Beyond the police blockades and metal detectors, I spot a few lacklustre food stalls and a woman emitting a high-pitched shrieks into a microphone. It’s raining. Men are not allowed inside. That includes my cameraman. “There’s no point,” I tell her. “We can’t even film it.”

“You take the camera,” Shafaq insists. “Come with me.” The cameraman looks unimpressed. “I’ll be back in 10 minutes,” I assure him.

Free from the gaze of men

Inside the concrete dome, women examine the brightly coloured fabrics and local jewellery that is for sale. Shafaq interviews a widow displaying her handicrafts, then barters for some earrings. Is this why she dragged me here, I wonder, to shop?

I wait patiently as Shafaq interviews the festival organiser. This is the first time in many years that they’ve been able to hold a festival. Peshawar has experienced attacks by armed groups that operate in the border region with Afghanistan. While military operations were recently held to clear the area of these groups, some threats remain. The women’s festival has received several, including one from a local policeman who objected to a women-only gathering.

The rain has stopped, and excitement begins to build around a marquee that has been set up outside. A line of small girls are dancing on stage, Bollywood-style. Shafaq pulls out a selfie stick and starts snapping pictures of us. “You can take your headscarf off,” she tells me. “No men.”

Other women have started to do the same, and soon the marquee is filled with hundreds of women. “Please don’t film us,” they request, pointing at their uncovered heads.

If someone sees them on TV, they may be accused of besmirching family honour. They look to be having so much fun that I agree to put the camera down and join in.

I watch a fashion show and speeches by local women leaders who award prizes to girls elaborately dressed in traditional clothes. A band will soon begin playing and Shafaq promises to show me a local dance. But the sun is setting and my team is anxious to get me back to the hotel. I can’t stay.

Outside the gates, I bubble with enthusiasm. “That was so amazing,” I tell the cameraman. “If only I could have filmed it. The women were dancing …” Suddenly, our security guards rush to take up position on either side of me.

“Aela, get in the car. You shouldn’t stand out here in the open,” says our local producer. I was attracting a crowd.

My dupatta (headscarf) was around my shoulders, and men had started pushing towards us to check out the foreigner.

I tried to catch one last look back over the fence, where just minutes before I had forgotten I was in Peshawar; where I had laughed and felt free. But I was swiftly bundled into a four-wheel drive and driven away.

I finally understood why Shafaq had brought me to the festival – so that I could see this secret world of women, free from the gaze of men. It was a place where being a woman didn’t mean always having to consider family honour. I didn’t film a single frame of it, but it was by far the best image she could have given me. 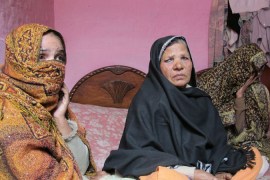 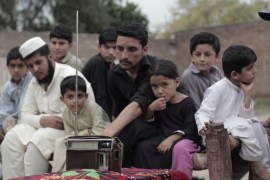