Kanchanaburi, Thailand – Tucked away among the swelling vistas of west Thailand’s Kanchanaburi province, Tanya Erzinclioglu paced around the periphery of Pha Luang Ta Bua Yanasampanno temple with her colleagues. Every now and again, she anxiously glanced at her phone, taking calls or checking for updates.

“I have no idea what’s happening,” she said repeatedly to herself.

Tanya’s mornings typically involved being inside the temple grounds where she helped to feed and observe some 137 tigers who were under her partial care. It had been her routine for six years and, from the passion with which she speaks about it, it seems to be where her heart lies.

But on the morning of Monday, May 30, more than 500 officers, wildlife officials, vets and police were waiting patiently outside the main entrance to the place better known as Thailand’s “Tiger Temple”. By the main road, a few officers sheltered from the heat under a nine-metre-high yawning tiger head sculpture.

It started as an impasse, but within six days, all 137 tigers would be taken in an unprecedented raid, which also unearthed dead tiger cubs, a dead bear and various animal horns.

Thailand’s Department of National Parks, Wildlife and Plant Conservation (DNP) was finally acting after years of allegations by multiple NGOs.

Tiger Temple has long been a staple attraction for tourists and backpackers looking for the perfect photo-op. A romantic picture was painted of ochre-clad monks and endangered tigers living together in a relationship of numinous unity. The message: “You too can partake in the harmony” – for a price.

During the raid, a two-page DNP declaration was handed out to members of the press. It explained that, legally, every tiger in the country is a “national asset” and Tiger Temple has a long history of “exploiting the property of the government for personal gain without permission from the government”.

“We knew that the temple was using the tigers for money,” DNP Deputy District General Adisorn Noochdumrong told Al Jazeera. “By law, they cannot do that.”

Tanya, however, insisted that at least some of that money had gone into improving the living conditions of the tigers – an issue paramount to her and many of her colleagues. In particular, she highlighted the temple’s pride and joy: its almost five-hectare “Tiger Island” enclosure.

Completed in 2011 at an estimated cost of 90 million baht, (slightly more than $2.5m) the 28 enclosures in Tiger Island meant that, for the first time, the tigers were able to experience outside spaces, albeit on a rotating schedule.

The open areas are strikingly different from other tiger zoos in the country. At the frenetic Sriracha Zoo, activities include tiger shows that seem to, in part, include having the cats jump through flaming hoops.

When ex-DNP director general Damrong Pidech visited the Tiger Temple in 2012, he actually praised the tiger’s living conditions, telling the Bangkok Post: “Frankly speaking, their living conditions are better than those in state-owned zoos.”

But, for years, multiple NGOs have expressed concerns over the temple management’s activities, alluding to corruption and even the illegal trade of tigers.

One of the most incriminating examples can be found in a 2015 report by the NGO Cee4Life.

The report contains a detailed investigation documenting events leading up to the disappearance of three tigers in December 2014, which were thought to have been sold into the illegal wildlife trade. Secretly taped audio and video recordings put forward a case suggesting that the temple’s abbot had been involved, breaking both Thai and international law.

What resulted was a seeming disconnect between the apparently superior living conditions of the tigers and suggestions of a murky history of opaque operations and illegal activities; a disconnect between staff who seem to genuinely care for the animals and a minority in the upper echelons of the temple who have been accused of not sharing their concern.

Adisorn said that the DNP has for years pleaded with the Tiger Temple monks and management to address their “illegal” or “hazardous” activities, such as the close contact permitted between tigers and tourists.

“We wanted to talk first, and [get] the temple to do what we asked them to do,” explained Adisorn. “We asked them to separate male and female [tigers],” he said, adding that they also highlighted the controversial practice of informal and unlicensed breeding – and subsequent inbreeding. “We knew they were trying to [increase numbers].”

When the temple’s management rebuffed their requests, Adisorn said they were left with no choice but to raid the grounds and relocate the tigers to their own facilities.

After slight delays on the first day of the raid, the DNP teams soon organised themselves into an efficient chain, managing the removal of all 137 tigers, averaging more than 20 a day.

Panee, one of the DNP vets working in Tiger Island, explained that it was “risky work, but so far the tigers are healthy”.

She added, however, that some inevitable complications had occurred. “A few tigers are reacting not so [well to the sedatives], but we are [closely] watching them,” she explained, holding up a vial containing the sedative used on the tigers so that they could be transported.

But as the raid progressed over the week, it soon became clear that Adisorn and his DNP team were extracting far more than just the tigers.

“We had always planned to raid every building, but I didn’t want it [to be] common knowledge,” said Adisorn, suggesting that any potential contraband on the grounds might have been removed prior to the raid. “I told [the Tiger Temple] we were only coming for the tigers.”

By the second day of the temple raid, the majority of monks had already left. As it became clear, an investigation into activities was starting in earnest, any monks still within the grounds refused to comment and Al Jazeera was instead led to Adisorn of the DNP.

On the third and fourth day of the raid, 40 frozen tiger cub carcasses were pulled out of the temple’s freezer, while in another building, 20 cubs were discovered preserved in jars of formaldehyde.

The local and international reaction was intense. The UN’s environment programme released a statement, saying these cubs represented “only a tiny proportion of the enormous extent of an illegal trade in wildlife”.

Reacting to the numerous findings, Teunchai Noochdumrong, the director of Thailand’s Wildlife Conservation Office and Adisorn’s wife, told reporters: “I am quite shocked. We have all heard concerns and allegations about this temple. I would never have thought they would be so blatant.”

However, according to Tanya, these finds were actually the easiest to account for.

“These were the policy of Dr Somchai [Visasmongkolchai, a former vet at the temple] since 2010,” she explained. “The DNP has been in our freezer loads of times in the past. Why are they acting surprised?”

She pointed out that months before the raid, the official Tiger Temple Facebook page had addressed the policy in an open post, which claimed they were keeping carcasses as proof they were not being sold on.

What eventually really shook Tanya’s faith, and that of her colleagues, however, were the far less dramatic discoveries from those spaces to which she and the majority of the staff were never allowed access: specifically, the monks’ housing.

After a raid on their buildings, the DNP eventually emerged with a haul including a hacksaw, vice, and materials needed to make and sell “deer antler supplement”.

On trucks outside the temple’s main building, they loaded a vast amount of flat timber suspected to be protected Siamese rosewood. And earlier that morning, a truck with two temple staff and a monk was stopped at the main entrance while trying to leave.

Hidden in the car were two tiger pelts, hundreds of vials containing tiger skin, and dozens of tiger fangs. Adisorn said those caught in the truck had referred the DNP to the abbot for any explanations.

Tanya said she had been driving past just as the DNP was showcasing these findings.

“I didn’t see [the tiger pelt] at first, but then I leaned around and saw this grotesque thing hanging over their hands,” she said. “Then I saw the second one. I felt sick.

“Bad things have happened in the past, but the temple showed us [in 2015] that they have moved on and that’s why I stayed,” she explained.

Now, Tanya said she is left with mixed emotions about abandoning all the work she has done so far. “Maybe that was the most naive thing ever, but it was real.”

With the Tiger Temple closed indefinitely and a heaving body of evidence being presented to the police, Adisorn is keen to show that the DNP is following protocol to ensure justice is served.

“We are discussing the possibility of creating a new sanctuary for the tigers along with some other animals,” he said, aware that there are fears the relocated tigers will suffer neglect.

Although he acknowledged that the DNP facilities are far from ideal, he promised it “will take care of them.

“We have been contacted by [the animal welfare charity] Four Paws, and they want to help to manage the tiger sanctuary with the DNP,” he explained.

For Tanya and the others at the temple who are still reeling from the discoveries, the welfare of the tigers remains one of their biggest considerations.

“The main thing we have ever fought for has been to have better lives for the tigers,” said Tanya. Her colleague nods, explaining that they have formed relationships with the animals over six or seven years and have no plans to stop seeing the tigers.

They will maintain the pressure on the DNP to improve the conditions within the DNP facilities, they explained.

“If no one is pushing and pushing, then there is no spotlight to make sure those conditions are improved,” said Tanya. She worries that as international attention fades, so will the outlook for the tigers she has spent years caring for.

But she hopes her worst fears will not come to pass. “In two weeks’ time, if anyone asks, ‘Hey, do you remember when the Tiger Temple was raided?’ They’ll just say ‘Oh yeah, it was the best thing ever, the best thing to happen to those tigers’. Meanwhile, they’ll all be stuck rotting in tiny cages.” 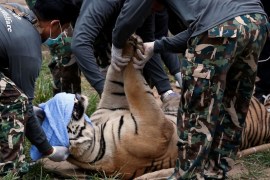 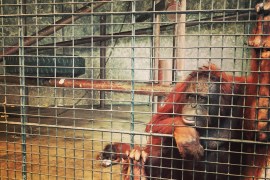 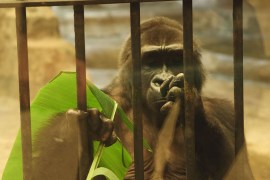