Lesotho – On a hard shoulder of the God Help Me Pass, a road snaking through the vast peaks of Lesotho, a landlocked mountain kingdom in southern Africa, men who worked for years underground line up in the bright sun outside a cluster of tents.

A blanket wrapped around her waist, Seipati, a 27-year-old mother of two, is here for the free testing for Tuberculosis (TB) and HIV/Aids being offered to ex-miners and their families.

Her father worked underground in the gold mines across the border in South Africa all her life. As a little girl, on a rare visit to the mine, she remembers him coming home hunched with exhaustion, coated in a thick, clinging layer of dust.

He returned to Lesotho when she was around 12 and died the same year from TB, a lung disease that is an occupational hazard for many miners.

Two years after his death, Seipati’s mother was raped and murdered. Her brother left for South Africa to look for work, but contracted HIV and died.

In the flimsy paper book where her health visits are documented, a recent assault by her husband is recorded. He had apparently been angry because she was doing domestic work in another house to help support her family.

Sometimes she wishes her husband would go to the mines, but she worries he will get sick like her father. As far as she knows, her family never received any compensation from the mining companies her father worked for.

In Lesotho, most people of Seipati’s age have a father or uncle who worked underground. Now, young people who have seen the effect mining has had on their communities are mobilising to seek justice for the miners who have become sick or died owing to the conditions they were forced to work in. At the same time, they are hoping to build alternative futures for people their age.

In a plastic hard hat and a high-visibility vest, Tau Tau, a 28-year-old accounting graduate who is volunteering at the health event, speaks of how he recently considered going to the mines himself, desperate for work after a year of searching for a job.

But having watched his uncle come home a shadow of a man after years working underground, he was afraid to. Instead he found work as a mobiliser with the Mineworkers Development Agency (MDA), a South African organisation working in Lesotho to help miners to claim compensation.

The agency aims to support ex-miners and youth to build alternative futures above ground, creating their own businesses or learning new skills.

While the health event is focused on raising awareness about and encouraging testing for TB and HIV among former miners and their families, Tau explains that compensation is still the first thing people ask about. For miners forced to leave work because of lung disease, it isn’t just a lifeline for them, it ensures that their children can go to school and have a better future.

“Their main hope is that they will be compensated,” he says. “Last year there was a huge drought. They say the only solution for us is to get money.”

In the Mineworkers Development Agency office in downtown Maseru, 27-year-old Shafiq Isaacs, the occupational health and programme coordinator, leafs through some of the claimant files that will make part of the largest class action South Africa has ever seen.

Miners can receive compensation for occupational lung disease such as silicosis, caused by silica dust that develops only years after working underground, but the process is often long and difficult.

Since 2011, Isaacs has been helping to prepare the ground for the class action, which accuses goldmining companies of putting profits before the health of their workers and failing to adequately compensate those with occupational lung disease. There are 14 class action applicants from Lesotho. Three have already died without seeing a result.

Many of the former miners in Lesotho worked under apartheid-era conditions and never had the same access to claim compensation as white workers or received significantly less when they did.

Fine adds that the industry now acknowledges that the levels of compensation are inadequate.

In the capital of Maseru alone, Isaacs says there are more than 1,000 former miners who have been confirmed with silicosis by the medical bureau in South Africa but have yet to receive their compensation.

He travels to rural villages often with nothing more than a name, tracking down people who are owed compensation or might have a claim. For many of the former miners it is too late, but Isaacs aims to get justice for their widows and children. He says every week in rural areas of Lesotho, ex-miners are being buried without ever seeing the money owed to them.

The social effects of the legacy of mining in Lesotho are left to Isaac’s generation to bear. Many young people grew up never seeing their fathers and then watching them return sick, struggling to adapt to normal life.

“It created a lot of social problems that haven’t been addressed fully,” Isaacs says. “Even with the payout, it still won’t mend a lot of things that happened.”

READ MORE: After Marikana, little has changed for miners

While the agency works to spread awareness of TB through health events, supported by international partners, Isaacs says unemployment makes it difficult to encourage people to think about their wellbeing.

“They need to work,” he says. “It’s a problem to tell people to be healthy but they don’t know what for …. Because of the lack of employment and the problems they have at home, they do not have that self worth.”

He encourages young people to stay in school, since better grades at least mean jobs above ground, even if they go to the mines. Still, he worries that last year’s drought will force more young people to look for work underground. But even that is becoming scarce, as companies decide to mechanise.

Mahloli Makutoane is a 25-year-old IT graduate and daughter of an ex-miner. Like Seipati, she remembers being a young girl visiting her father at the mines where he worked for three decades, and watching him tramp home in overalls and gumboots, covered in dust and dirt from long hours underground.

Her family had very little growing up, despite the difficult work her father did. But as the daughter of an ex-miner, she was able to get a scholarship through the MDA to study IT at a university in South Africa, specialising in business systems.

Still, when she returned to Lesotho, she spent months struggling to find work. “I came back here and I hustled for a job, for about a year with no luck,” she says.

Now she works with Isaacs at the development agency, analysing data on the needs of ex-miners to improve the way the organisation supports them.

Her father left the mines five years ago and returned to Quthing, the rural town where she grew up. His brother died of TB after working underground. His wife also succumbed to the disease.

Her father hasn’t been diagnosed with anything yet, but she still worries. “We don’t know, because some of the occupational diseases they tend to show up after a long time,” she says.

She supports her parents through her work, especially after the drought when crops failed and prices in the shops skyrocketed. In her father’s day, school was not a priority because the only work was underground. But she says among her generation things are starting to change, though opportunities are still limited.

She says she wouldn’t advise anyone her age to go to the mines, even if they are desperate for work. But she knows many are struggling to find jobs. Her younger brother is just completing school now and wants to study accounting.

“I think it has changed a lot and more people are interested in education,” she says. “But a lot of people I went to school with are still unemployed.”

Caelainn Hogan reported from Lesotho through a fellowship with the International Reporting Project. 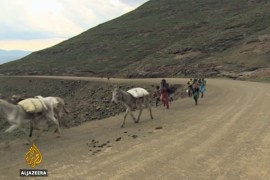