In Myanmar, thousands of families earn a living farming the crop that feeds the heroin habit of the world’s drug users. But not all of the country’s opium is smuggled abroad.

Pure, cheap heroin is flooding Myanmar’s villages, leaving a trail of death and devastated families in its wake.

Dr Nang Pann Ei Kham, the coordinator of the Drug Policy Advocacy Group, talks about how the fear of corporal punishment and imprisonment prevents many drug users from seeking help, and the rehabilitation centres where “treatment” is based on religious teachings.

“They are the ones whose lives, livelihoods and health are directly affected by repressive drug policies based on criminalisation and forced eradication. Unfortunately, their voices are too often ignored,” she explains.

“I strongly believe that repressive and punitive approaches only make problems worse. Drug-related issues should be addressed through policies that are grounded in public health, human rights and alternative development.”

Al Jazeera: How many people are estimated to be addicted to drugs in Myanmar?

Dr Kham: The only data that is available in Myanmar is related to the number of people who inject drugs.

According to a recent survey conducted by the Myanmar Ministry of Health, there are an estimated 83,000 injecting drug users in the country. To provide you with some means of comparison, it is about twice as many as Thailand (40,300), but only half the estimated number of drug injectors in Malaysia (170,000).

Al Jazeera: Has drug addiction worsened in recent years? And, if so, why?

Dr Kham: It is very difficult to say whether drug use and drug addiction have increased in recent years. This would require conducting nationwide surveys on a regular basis, and no such data exists. However, the Myanmar Ministry of Health reviewed that the estimated number of people injecting drugs rose from 75,000 last year to 83,000 currently.

That seems to suggest at least a slight increase.

What happens is also that drug-related problems were largely neglected and under-reported until recent years, due to the political context. Journalists and civil society organisations are now much more free to report about problems raised by drug addiction. So those have become a lot more visible than they used to be in the past.

Al Jazeera: What is the most problematic drug?

Dr Kham: From a public health perspective, heroin is unequivocally the most problematic drug in Myanmar, because it is most commonly injected. Northern regions, such as Kachin, Northern Shan or Sagaing Division, are particularly affected.

The most severe consequences of heroin use include lethal overdoses, the transmission of blood-borne infections such as HIV, Hepatitis B and C due to unsafe injection practices and needle sharing, but also family and other social problems.

Some mental health disorders induced by excessive use of amphetamine-type stimulants, known as Yaba or Yama in the region, have been reported, too, but little data is available yet.

Al Jazeera: Is there a stigma attached to being an addict?

Dr Kham: There is a huge stigma towards drug users. People often refer to them using derogatory terms such as “Bein Sar”, literally meaning “opium eater”, that would be a Burmese version of “junkie”.

If a drug user turns out to contract HIV/Aids, then he or she is even more discriminated against. Most people despise, or at least distrust, drug users. So they are facing immense challenges and difficulties, not least to find a job, even when they are seeking treatment or recovering.

Al Jazeera: How is drug use contributing to the HIV/Aids epidemic?

Dr Kham: It is actually not drug use itself that contributes to the HIV/Aids epidemic, but rather the high prevalence of unsafe injecting practices such as needle sharing. And those can be very effectively reduced if harm-reduction services are provided at a sufficient scale and users are free to access sterile injecting equipment without fear of arrest.

Thanks to harm-reduction programmes, HIV prevalence among people who inject drugs has decreased from more than 70 percent in the early 1990s, to around 23 percent in 2014, according to statistics released by Myanmar’s Ministry of Health.

Despite the increasing availability of sterile injecting equipment, some drug users can still be reluctant to carry new needles and syringes, due to their fear of being arrested, prosecuted and incarcerated. I would argue that more than drug use itself, it is the criminalisation of drug use that fuels HIV/Aids epidemics among people who inject drugs.

Al Jazeera: What facilities and treatment options are available for drug users?

Dr Kham: Government-run drug treatment centres propose drug detoxification services, however their number and resources are very limited. Such facilities merely focus on treating withdrawal symptoms without providing a more holistic approach of drug treatment that would address broader psychological or social issues faced by people with a drug dependency problem. Relapse within a few months is therefore extremely common.

The government provides methadone substitution therapy with the support of international donor agencies, which to date remains the most effective treatment for opiate dependency. This programme has grown steadily over the years and more than 10,000 drug users are currently benefiting from this treatment.

Other types of “treatment and rehabilitation centres” are run by private or faith-based organisations, which offer therapies that are essentially based on Bible studies. Those programmes can work for some people, but they hardly meet the minimum standards one can expect from a treatment centre proper: “treatment” is often compulsory, sometimes following arrests that involve corporal punishment, and no medical assistance is provided.

Finally, local and international NGOs provide harm-reduction services to reduce the most adverse consequences of drug use. Services include the distribution of sterile needles, syringes and condoms, but also basic healthcare, HIV-related services and overdose management. The reduction of HIV prevalence among people who inject drugs in Myanmar can certainly be attributed to the existence of such programmes, which are funded by international donor agencies.

Al Jazeera: What more needs to be done in Myanmar to help drug users?

Dr Kham: Many drug users are still being harassed, arrested and jailed for numerous years – not because they are committing serious criminal offences, but just because they are using drugs. I would, therefore, like to invite our new government to reconsider the 1993 Narcotics Law and stop regarding drug users as criminals.

After years of military oppression, I’m only dreaming to see our already scarce resources being used to promote access to health and other social services, rather than jails and prisons to detain even more people. 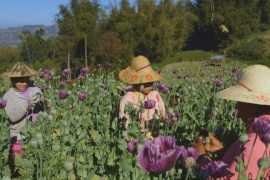 Growing opium provides vital income for thousands of families in Myanmar but the drug is devastating entire communities.