Mariana, Brazil – On November 5, 2015, the Fundao dam burst in the inland municipality of Mariana in the Brazilian state of Minas Gerais. The Brazilian mining company Samarco, owned by two of the world’s biggest mining corporations, Vale SA and BHP Billiton, operated the dam.

Tcharly do Barmo Batista, a 23-year-old father, closes his eyes as he recalls the mud tsunami that swept away half his village, Paracatu de Baixo.

“We could hear the mud bursting down the valley. It took my house, the football field, the church, the local bar, my neighbours’ houses.

“And then there was silence.”

Batista is one of thousands affected by the burst dam. All along the river, people are asking more questions than the companies are willing to answer.

By the end of February, Samarco’s president, Ricardo Vescovi, and five other officials had been put under investigation for environmental crimes. At the beginning of May, eight more officials from the company were put under review. The company had been warned about the dam several times and advised to increase monitoring of it and to reinforce it with a buttress, but Samarco did not follow the recommendations.

The trial against Samarco has now stopped after the three companies involved, Samarco, Vale SA and BHP Billiton, signed a compensation agreement. Over the course of 15 years, they will repair damage amounting to almost $5.6bn.

Everyone could have survived

When the dam collapsed, a three-metre mud wave consisting of 62 million cubic-metres of mining waste stormed down the valley, heading for the small town of Bento Rodrigues a few kilometres away.

“I drove as fast as I could towards Bento Rodrigues, but the roads were closed. No one was allowed in or out. I was in complete despair and thought that I would never see my family again,” says one witness to the disaster, Expedito.

He shakes his head and clutches his coffee cup as he sits in the kitchen of his new accommodation – temporarily allotted to his family by Samarco.

“It was a completely normal day,” adds his wife, Roselene, who was at the school where she works as a teacher when the dam collapsed. “Suddenly, someone came running in through the door of the school yelling, ‘Gather all the children and run towards higher ground.'”

Massive outpourings of mining sludge killed 13 workers at the dam when it burst and collapsed. Still, the company didn’t issue an evacuation notice for the village of Bento Rodrigues that lay in the path of the toxic waves.

When the mud thundered in over Bento Rodrigues, five people were dragged off by the powerful wave, three of them children.

“There was time. There was time to evacuate everyone, had only the warning come,” claims Expedito. The relief of finding his family alive initially overrided concerns about their future and the total loss of their possessions. But today, Expedito’s sighs deepen as he looks around the empty kitchen.

The residents of Minas Gerais are accustomed to mining, as well as to the trains travelling continuously up and down the mountain towards the harbour, carrying tonnes of minerals that account for nearly half of the state’s gross domestic product.

Both companies hold a far from clean record, according to international environmental organisations, including Greenpeace. In 2012, Vale was awarded the disgraceful “Public Eye Award”,  presented to shame companies accused of environmental or human rights violations.

“This was no accident. The companies are 100 percent responsible for this,” said Mario Zonta, who is a member of the Mining Victims Movement, which has been organising communities affected by mining since 2009 and is the result of a long struggle against Vale SA in northern Brazil. Zonta adds that it is the pressure for increased profit that weakens operational safety in these sorts of situations.

“The mining companies’ logic is to work at full speed, 24 hours a day,” he says. “They are aware of the risks, but they don’t have any obligation to care for the environment or the people living near the mines.”

Although Samarco initially agreed to an interview, Al Jazeera was only provided with official documentation relating to the dam collapse by the company.

‘We saw tonnes of dead fish flowing past us’

The railway line from Minas Gerais to the harbour follows large stretches of the Rio Doce riverbed. Along this span are about 200 towns where thousands of people live.

The enormous wave from the Fundao dam flowed along this same route, devastating aquatic life in the river. Fishermen lost their livelihood, and farmers lost their irrigation source and livestock. The drinking water of millions of people was contaminated, and more than 900 hectares of soil was covered in toxic sludge.

The mud’s voyage down the river took 16 days, and the concerns of the inhabitants of the towns and cities along its banks grew day by day. According to many, and confirmed by a Samarco official who declined a formal interview, no information was given about what contaminants were present in the water, nor were instructions on how to respond to the disaster issued.

Almost as a warning of what was to come, dead fish came floating down the river.

“We heard about how the mud was about to flow down the Rio Doce,” recalls Luciano de Bem Magalias, director for SAAS, a water a sewage company in Baixo Guandu, a village more than 400 kilometres away from the dam collapse.

“The first thing we saw was tonnes of dead fish flowing past us … and a stink of rotten mud and dead animals,” he says.

During a press conference in November, Samarco reassured the residents that the waste floating down the river did not constitute any danger to humans – a point disproved later by an analysis of Baixo Guandu’s water that registered arsenic, manganese and other poisonous substances.

The United Nations backed the results of the Baixo Guandu municipality in a report released on November 25, 2015, that stated the mud “contained high levels of toxic heavy metals and other chemicals”.

“No one would tell us if the water was drinkable,” Magalias says, “and everyone here relies on the river.”

Douglas, a young leader from the indigenous Krenak group, holds a brochure about the river’s water quality in his hand. The mining company’s logo is on the front page. His brows furrow as he reaches for the phone and dials the number to reach Vale.

The indigenous Krenak have had a long conflict with the mining giant, which ships more than 100-million tonnes of iron a year from the mountain down to the ocean through the Krenak territory. This isn’t the first time Douglas has called Vale, and the woman on the other end of the line is the person responsible for communication between the company and the indigenous group.

Samarco and Vale have been distributing to the local population brochures containing information of Samarco’s claims of having conducted more than 500 water analyses that show the water quality in the Rio Doce is similar to its pre-collapse quality. However, in seeming contradiction to these claims, the company has been delivering water to people and animals along the river and has also prohibited fishing.

“Why are you guys coming out here and giving my people brochures?” Douglas shouts angrily over the phone to the Vale representative. “You haven’t consulted us about this. You are spreading lies about the water and confusing us.”

Stacks of water bottles are scattered around his house. In fact, these empty bottles are strewn around every house in the area.

“They say the water is clean, yet they come every day with bottled water for us and water for the animals,” Douglas says. “What’s the logic?”

Since the Krenak people are unable to bathe in the river, Samarco via Vale has given every house in the seven Krenak villages a big blue tank of water – something Douglas sarcastically calls the “Samarco pools”.

“The mood here is glum now. For us, the river isn’t just for water, it’s the source of all life. It’s where we fish, bathe, and have ceremonies. We have our own songs about Rio Doce,” he laments. “Now it’s dead, and we don’t know if it will ever come back.”

Stepping outside, Douglas and his cousin stand with their hands on their hips, looking at the dry layer of cracked mud that was left behind after the wave. At its worst, as the mud rolled past, the river rose several metres, reaching the houses.

The Krenak people, like the fishermen in the small houses along the river and the farmers with their animals and fields, all stand with arms limp at their sides when they talk about the future.

No one knows what it will bring, but everyone is clear that they can’t rely on Samarco’s water bottles forever – nor the monthly payments for lost wages.

Douglas stands on top of a large rock in the river and looks over the horizon as one of Vales’ trains chugs past, lugging 150 iron-ore filled wagons.

“We feel lost – crushed between the interests of the large corporations. The river was our livelihood and gathering spot,” he says. 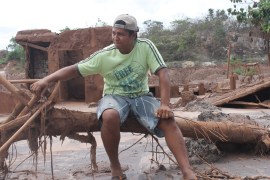 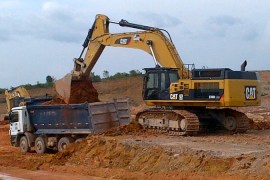 Gabriel Elizondo speaks with a supporter and opponent of a dam which will displace villagers while creating power. 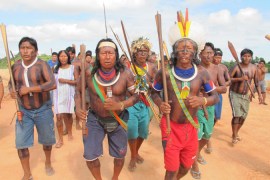 About 150 indigenous people are protesting a massive dam they say will dry up the river their livelihood depends on.