Mumbai, India – All 7ft 2ins of Saba Parveen charge down the centre of the pitch to receive a pass. Then she smoothly dribbles past the defenders and sends the ball curving into the goal with a powerful right-footer.

Seated in the audience, the same boys who jeered at her a couple of years ago, cheer her on.

It’s difficult to believe that the 25-year-old only learned to play football three years ago.

Saba lives in Mumbra, a Mumbai suburb with a largely Muslim, lower and middle income population of 900,000, according to the 2011 Census of India report.

Her only previous exposure to sport had been as a child playing cricket with neighbourhood boys on the street outside her home.

But as she grew older, even that had become out of bounds. “You want to play cricket? With boys?” she recalls her mother saying as she dismissed her requests.

“I needed my family’s consent for everything that I wanted to do outside the four walls of our home,” she says. And with four brothers, there was always someone to keep an eye on her.

Being a girl in Mumbra isn’t easy, Saba says. Getting permission to spend time in public spaces can be difficult.

So, when, in 2012, Magic Bus, an international NGO, approached a Mumbra-based women’s collective called Parcham, which is now an NGO, with the idea to train a team of teenage girls, it took them six months to find enough girls willing to play.

“In Mumbra, as in many other parts of our country, people are not used to seeing girls outside their homes without a purpose acceptable to society,” says Sabah Khan, 40, a founding member of Parcham.

In order to come out and play football, she says, the girls had to completely believe in their right to occupy a public space without any shame.

“It was difficult for them because they feared repercussions from society,” she adds.

READ MORE: How football is keeping girls in school in Nepal

For Saba, the obstacles were many.

“It wasn’t just my family, you see, I was worried that boys would make fun of me,” she says.

“The biggest barrier was within me, though,” she adds. “I was petrified to come out and play football in an open ground, even though I wanted to learn the game so much.”

The Mumbra all-girls football team was ready before the end of 2012. Every Sunday afternoon, they would practise on open ground in the neighbourhood for two hours, propelled by their passion for the sport and their desire to challenge the belief that girls belong in the home.

Today, the team has 15 members – some are Muslim, others are Hindu .

But their journey hasn’t been easy.

Getting permission was their first hurdle.

Grade 12 pupil Jodha Anu Kunwar’s father wouldn’t allow her to play until her friends stepped in to help persuade him.

Twenty-two-year-old Aliya Shaikh’s three brothers objected. “If you wear shorts, boys will stare at you,” they told her.

Saba didn’t even dare ask. She just sneaked out each Sunday with her brother’s T-shirt in her duffel bag after telling her mother she was going to attend a Parcham meeting.

“I was allowed to come out for football coaching only after I had helped mum with cleaning, washing and cooking,” says Sayyed Umay, who is now a college undergraduate.

Their obstacles continued on the field as neighbourhood boys harassed them.

“Does she even have the strength to kick? She will cry if she gets hurt,” they recall them jeering.

“The boys tried their best to turn us away from the field,” says Muskaan Sayed, who has just finished grade 12.

“Once, they kicked the ball straight into my face and hurt my eye quite badly,” Saba adds.

READ MORE: A day in Delhi’s under-the-bridge school for the poor

At first, the team tried to ignore them. But that didn’t help. “When they didn’t get our attention, a group of boys decided to come and play in the same spot we occupied and left us no space on the field,” says Muskaan.

But as their training progressed and their love for the sport grew, the girls became more confident. Playing became more important to them than how they were perceived.

“The girls now started to assert their right to occupy some space on the field,” says Parcham’s Sabah Khan. “They spoke with and even argued with the boys – something they couldn’t have dreamt of earlier – and reclaimed their spot.”

Team Mumbra hasn’t looked back since. They have won tournaments and even played friendly matches against boys’ teams.

In their own community, they have broken stereotypes and staked their claim to public spaces.

Recently, the team invited young boys and girls from Mumbra to learn football together because “gender equity needs to be perpetuated early,” says Sayyed Umay.

Mumbra’s playgrounds are no longer filled only with boys.

The team has also brought people together across religious divides. As teammates of different faiths trained and played together, friendships blossomed and relationships were formed not just between the girls but between their parents as well.

“Mixing together gave them an opportunity to see their similarities and they realised they don’t need to fear each other because of religious differences,” says Sabah.

READ MORE: Vidhya Das and the fight for poor women in India

The all-girls football team of Mumbra – many of whom are the first generation in their families to have attended school – believe they have set an example for others to emulate and are determined to help them along the way.

In February, they trained 100 girls from a local school to play friendly football matches on International Women’s Day.

“Parents cheered the loudest,” Saba says, adding that she has noticed how many families are now willing to invest in the education, talents and interests of their daughters and not just their marriage.

The team is now training another 45 middle-schoolers from the neighbourhood.

And Saba has ambitions to make a career out of training others by becoming a professional football coach.

“I want to dedicate my life to coaching as many girls as possible,” she says, adding that this time, her ammi (mother) not only knows about it but approves. 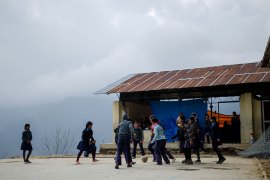 Due to extreme poverty in the area, many young children are sent away to work and help support their families. 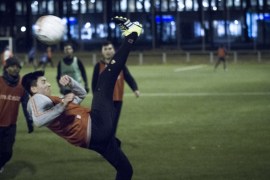