The 16th Doha Forum has wrapped up with speakers from around the world touching on issues ranging from global and regional security to conflict resolution and climate change.

The conference, organised by Qatar’s foreign ministry, was attended by heads of state from South Africa, Afghanistan, Yemen, Mauritius, and Niger, along with Ban Ki-moon, the UN secretary general.

He stressed the need to support human rights and bolster security for the people of the Middle East region – and around the world.

According to Sheikh Mohammed, achieving peace in the volatile Middle East is directly linked to ending the Israeli occupation of the Palestinian territories, including Jerusalem.

His remarks, meanwhile, read as a clear policy statement that sets the parameters of Qatar’s foreign policy when it comes to its approach and dealings with the region’s combustible environment.

He also made it clear the main foreign policy instrument of his country is the soft diplomacy of “mediation” efforts, while at the same time “discouraging the use of force to resolve disputes”.

It is worth mentioning that Qatar’s foreign policy has witnessed a paradigm shift that started with the ascension of Sheikh Tamim to power in 2013.

That shift came to address, in part, some of the past regional criticism of its more assertive foreign policy.

This is particularly important because the region is now more unstable than ever before with active wars in Yemen, Syria, Iraq and Libya.

Qatar’s falling back on its primary foreign policy doctrine  of “mediation” is perhaps designed to help regional actors reach a point where keeping their countries intact and stabilised becomes a priority and in their own interests. It also helps to enhance Qatar’s regional standing as an indispensable partner in a chaotic and burning region.

Sheikh Mohammed also criticised the international community for failing the Syrian people and its inability to the end “the humanitarian catastrophe” there.

Ramona Manescu, European Parliament member from Romania, criticised Russia in one of the sessions for its intervention in Syria on behalf of President Bashar al-Assad, saying it has prolonged the suffering of the Syrian people.

Manescu accused Russia of using Syria as a card to leverage it with the West against sanctions imposed over Russia’s war in Ukraine and the annexation of Crimea in 2014.

READ MORE: Israel – The rise of the new ‘messianic elite’

Many Arab leaders and governments have come to view Israel’s occupation of Palestine and its behaviour towards the Palestinians as strictly an Israeli-Palestinian problem, not an Arab one.

That’s a departure from a bygone era when the struggle against the occupation was a central theme that brought Arab states together.

Therefore, Qatar’s official foreign policy towards the occupation and the plight of Palestinians sets it apart from the majority of the Arab world.

Saeb Erekat, the Palestinian Liberation Organisation’s chief negotiator with Israel, spoke about his people’s need for international backing to force Israel to end its decades-old takeover of Palestinian lands.

Erekat compared what he called the “right-wing extremism” of Benjamin Netanyahu, Israel’s prime minister, with that of Abu Bakr al-Baghdadi, the leader of the Islamic State of Iraq and the Levant (ISIL, also known as ISIS) group.

“The two-state solution is the only possible solution that would put an end to the suffering of the Palestinian people,” he said. 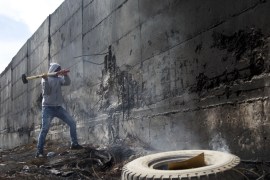 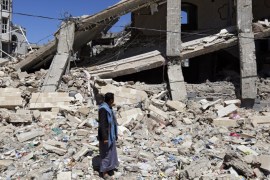