Athens, Greece – Balloons float in the air and candlelight from a birthday cake dances across the walls of the dining room in a central Athens hotel. The hotel is usually host to tourists and school trips, but its newest guests are some of the 54,000 refugees in Greece who found themselves stranded after European borders were closed. The birthday party for the daughter of one Syrian family provides a brief respite.

But one guest is finding it hard to celebrate.

Twenty-year-old Waleed al-Shaibani spent thousands of dollars to escape war-torn Yemen in the hope of continuing his international management studies in Europe.

After weeks waiting in the bitter cold to pass the Macedonian border, in the hope of reaching family in France, he gave up and returned to a camp in Athens where the UN refugee agency, the UNHCR, recommended that he apply for relocation to another European country.

Doing so plunged him into a nightmare.

A plan agreed upon by EU states at the height of the refugee crisis in September 2015 proposed that refugees (mainly Syrian, Iraqi and Eritrean) be distributed around Europe to relieve the burden on the frontline states of Italy and Greece.

Of an agreed figure of 160,000, to date only 1,441 have been moved, and some central European states are bitterly contesting the proposal.

Poland initially accepted Waleed’s application, but after he’d waited for months for further instructions, Poland’s deputy foreign minister, Konrad Szymanski, declared the quota deal “dead” and suspended the refugee programme. When Waleed asked the Greek asylum service to be relocated elsewhere, he discovered that Yemenis were no longer eligible for the programme.

“I have seen Syrians and Iraqis move from Greece, but we Yemenis are not allowed. Why not?” he says, exasperated.

The UN claims that an estimated 6,000 Yemenis have been killed in the country’s civil war.

Waleed is originally from Taiz, a besieged city held by Houthi rebels.

“We have the same kind of war, but people don’t know about us,” he says.

The nationalities considered eligible for relocation are chosen on the basis that they have an asylum acceptance rate of 75 percent or higher. But this methodology seems flawed. Refugees from Afghanistan, for example, make up a large portion of those stranded in Greece. But as more than a quarter of them are unsuccessful in their asylum claims across Europe, they are not applicable for relocation. Costa Ricans, by contrast, are, despite the fact that there is not one known refugee from that country in Greece.

Yemenis did not figure in the top 30 nationalities claiming asylum in the EU in 2015, yet it appears that of the few who make it to Europe, more than a quarter are being denied.

However, the guidelines for the relocation programme stipulate, as European Commission spokesman Markus Lammert confirmed to Al Jazeera, that “Yemenis who have expressed their interest in relocation before Yemen was taken off the eligible nationalities list continue to be eligible for relocation”.

“I don’t want relocation any more because they lied to me. They told me you will wait two months and you will travel. But when I went to the Greek asylum service, they told me to claim asylum here or go home,” he says, shaking his head in disbelief.

“They just want us to go back to our countries; they don’t care if we die there.”

Zoe Nasica, head of the relocation unit at the Greek asylum service, put the blame for the confusion on individual countries, telling Al Jazeera: “When we submitted specific Yemeni cases to member states, they refused as [Yemen] wasn’t any more included.”

Too dangerous for repatriation

So our country is too dangerous for them to send us back, but not dangerous enough for Europe to accept us.

“If I claim asylum here, there are no options,” he explains. “Even the Greeks don’t have jobs, and they cannot provide housing, so I will be on the street. If I go back to Yemen, I know it’s war, but at least I can sleep in my bed.”

The International Organization for Migration (IOM) arranges flights for some refugees who wish to return home. Most of the current takers are Iranians, Afghans and North Africans. But when Waleed inquired if he could benefit from the scheme, he was confronted with a paradox.

“We went to the IOM and asked if they can repatriate us, but they said they cannot because it’s not safe,” he explains.

“So our country is too dangerous for them to send us back, but not dangerous enough for Europe to accept us.”

The IOM confirmed to Al Jazeera that they do not organise voluntary returns to Yemen, as it is not considered safe for the beneficiaries.

Even the clandestine options are now unavailable to Waleed.

“I thought about using a smuggler, but I have no money left,” he says, pulling out a tiny gold sovereign bearing the face of Britain’s King George V.

Waleed smiles. “So, I’ll sell it, then that’s the last thing for me.” 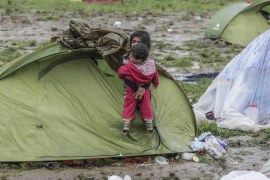