Guadalajara, Mexico – With its leafy, brightly painted entrance, the new FM4 migrant shelter in Guadalajara is a welcome sight for the weary migrants making the hazardous journey from Central America and southern Mexico to the US.

Whether driven by economic desperation or displaced by the region‘s rampant, gang-related violence, the majority of migrants have spent weeks clinging on to La Bestia, the freight train that runs to the US border.

Here they have a chance to rest, wash and eat, while volunteers from non-governmental organisation FM4 Paso Libre offer them clean clothes, medical attention, and legal and psychological counselling.

“This is the best shelter we‘ve been through. They have my respect,” says Alvaro, a Honduran migrant who is particularly excited by the prospect of a shower and a change of footwear. “I haven‘t taken my shoes off in two weeks and my feet smell awful.“

Alvaro, 26, and his cousin Emilio, 23, who asked that their names be changed to protect their identities, left home to seek work in the US.

Having lost what little money and possessions they had while fleeing immigration agents, the pair must now also dodge the ruthless gang members who demand $100 from every migrant boarding the train. Upon reaching the border, they intend to work in Mexicali, the capital of the Mexican state of Baja California, until they can afford a human trafficker, or coyote as they are known, to smuggle them across.

“We‘ve been begging for food. Sometimes old women come to the train tracks and throw bags of food for us to catch as we go past,” Alvaro explains. “We spend each night clinging on to the train so we can‘t sleep until we reach our destination. We get off in each city and try to sleep on the street for a few hours and then we get on board the next train.“

‘A culture of respect for migrants’

Guadalajara, the capital of the western state of Jalisco, lies on the longest of the three routes to the US.

Gonzalez is FM4‘s legal representative and one of six formal employees.

The organisation relies on regular donations and 140 volunteers to support the migrants who pass through. Founded 11 years ago, FM4 opened its first kitchen and day shelter in 2010 but had to shut it down last summer after the surrounding streets became a hive of coyotes, gang members and addicts looking to prey upon vulnerable migrants.

With the support of local government, it reopened in a safer area in March. The shelter will soon be equipped with bunks so migrants can stay overnight.

FM4‘s next challenge is to make local authorities respect the basic rights of undocumented migrants. While federal law establishes their rights to health, justice and education, Gonzalez says this legislation is rarely enforced in Jalisco because there is no state law to back it up. Migrants can currently report crimes or receive medical attention if accompanied by lawyers, he says, but if they attempt to do so alone they risk being unlawfully deported.

Working closely with FM4, Jalisco‘s first independent state congressman, Pedro Kumamoto, recently proposed a law that would guarantee migrants‘ rights to health, education, justice, and legal recognition of any children born here, while outlawing labour discrimination. The bill already has sufficient congressional support to be voted into law, Kumamoto says, although the state governor must then ratify it.

With migrants currently suffering institutionalised xenophobia and discrimination, Kumamoto tells Al Jazeera that Jalisco is facing a humanitarian crisis. “We must build a culture of respect for migrants,” he says. “We want full recognition of the rights of all people, regardless of their immigration status.“

Although the western route through Guadalajara takes twice as long to traverse as the central and Gulf routes, many migrants consider it the least dangerous option.

In eastern Mexico predatory drug gangs such as Los Zetas are known to kidnap migrants for ransom, forced labour or prostitution. In 2010, the Zetas massacred 72 migrants who refused to work for them or could not pay for their release. But, Gonzalez emphasises, “this doesn‘t mean the western route is safe. There‘s violence here too and there are fewer shelters along this route.”

Women account for just 9 percent of migrants on the western route, Gonzalez explains, as they typically take the shorter routes. Yet they face dangers whichever path they choose, with Amnesty International estimating that 60 percent of female migrants suffer sexual violence.

“I‘ve spoken to women who were travelling alone and in order to survive, in many cases they find a partner and offer them sexual favours throughout the entire journey, in return for protection,” Gonzalez says. “That way they avoid being raped by 10 or 20 people.“

Despite the dangers, many migrants feel it is worth the risk to escape the violent realities of home.

“I want to do something good with my life. Life in Honduras is very difficult with all the gangs there,” a former gang member explains. “I have a couple of gunshot wounds in my leg from when I was 15. I used to do bad things but then I got out and started working as a mechanic. Now I want to get further away.“

Few of the migrants fleeing the violence in Honduras, Guatemala and El Salvador realise they may be eligible for refugee status in Mexico. FM4 is currently helping 10 migrants to apply for asylum, although Gonzalez admits it‘s a difficult process as the Mexican authorities are as tough on immigration as their US counterparts.

Asylum is an attractive proposition for Eduardo Ramos, a 42-year-old Salvadoran businessman who arrived in Guadalajara a month after leaving home by bus. Having previously lived for nine years in the US, Ramos had saved enough money to build a home and open a business back in El Salvador.

“When I returned home I was extorted by street gangs and even the police. Then my oldest son was kidnapped. I sold everything I had to pay for his release,” Ramos says.

“I was planning to return to the United States but now they‘re offering me asylum here in Mexico. If I can stay here legally I‘ll bring my family and start a peaceful new life away from the gangs. I don‘t want to return to my country.“

There is also plenty of internal migration in Mexico. “Of every 10 migrants that come through here, four are Mexicans. They usually come from the poorest, most marginalised southern states like Chiapas, Guerrero and Oaxaca,” Gonzalez notes. “They’re not necessarily migrating to the United States, but to northern Mexico, where there’s seasonal agricultural work.”

This is the case with Laureano, 23, and Lenin, 37, from southern Tabasco state. “We‘re migrating for economic reasons. Work is scarce in Tabasco and pay is very low,” Laureano explains. “We‘re going to work in the vineyards in Tijuana. The grape season is about to start and they‘ll pay us in dollars there.“

With no money for bus tickets, they have been travelling on the train for almost a week. “It‘s very dangerous,” Laureano says. “Many of our companions have been injured and we‘ve even seen people fall from the train and lose their lives.“

Having lost their few belongings along the way and suffered during bitterly cold nights, the pair were relieved to reach the FM4 shelter.

“I wasn‘t expecting anything like this,” Lenin says. “They‘ve been really kind and treated us like family.“ 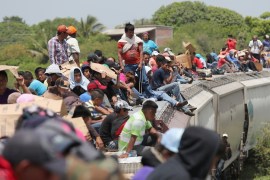 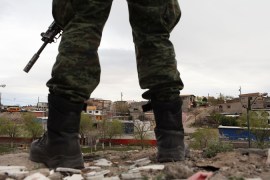 Josh Rushing travels to the city dubbed the murder capital of the world.