After being stranded in the Mediterranean for three days, fear had overcome Alou Sango. “I thought that we would all die, because there was nothing left, the petrol had finished,” he says of his journey from Libya.

Like thousands before him, Sango boarded an overcrowded boat to escape the country’s turmoil after being unable to return to his native Mali. But after days at sea the captain lost his way and, without a GPS position to give to the Italian authorities, the 100 or so passengers were losing hope.

Their rubber dinghy was finally spotted by a Chinese vessel, which picked up the migrants and took them to Italy, where Sango, now 24, is studying through a Rome-based charity, Sant’Egidio Community.

His journey in 2014 exemplifies one of the greatest challenges rescuers in the Mediterranean face – not being able to pinpoint the small rubber dinghies drifting across a vast expanse of sea.

With the warmer weather, as the high season of boat journeys begins again, rescuers are beginning to explore the idea of adopting what were once reputed as high-tech killing machines – drones – to help them save lives.

Ian Ruggier, head of operations at the Migrant Offshore Aid Station, or MOAS, an independent search-and-rescue organisation, says a drone equipped with a camera enables his team to focus their response. “You have an image and can see what’s actually happening. That helps the decision-making process,” he says.

Since launching operations at sea in 2014, MOAS has saved 11,685 people in the central Mediterranean with the help of a drone, also known as an unmanned aerial vehicle, or UAV. Those rescued have no idea of the technology which came to save them, Ruggier says, as the drone flies too high for them to see it.

While a MOAS ship patrols the waters, a 250kg-drone takes off from the deck and feeds footage back to a three-member team which runs its daily flight operations. The regular and thermal images sent back have proved invaluable.

“A couple of times there was a blip just beyond the flight path. We went to visit and there were boats in difficulty,” says Ruggier. “Had we not been flying they might have been missed, the situation might have been worse, or we might have come across it much later.”

The risk of missing boats became evident earlier this month, with reports of up to 500 people drowning in the Mediterranean. The 41 survivors told the UN refugee agency they had drifted for three days before being spotted.

The loss of life brings the number of dead or missing en route to Europe to 1,261 so far this year, while more than 181,000 have survived the crossing during 2016, according to the UN.

MOAS is planning to continue using drones this year. They are using a UAV model built by Austrian company Schiebel, which have also been used to monitor the peace deal in Ukraine. Hans Georg Schiebel, the firm’s owner and chairman, says whatever the use the main purpose is to expand a user’s horizons. “The problem is that the earth and the water is a ball, so you don’t see very far at sea. Sight is extremely limited,” he says.

Getting authorities on board

Despite the fact that using drones has proved successful in search-and-rescue operations, it has been difficult to convince national authorities of their value. Italy’s coastguard, which last year coordinated the rescue of over 150,000 people, told Al Jazeera it is currently not using the technology.

While costs may be a factor – Schiebel charges a monthly fee for a drone and personnel is €300,000 ($340,000) – the infancy of regulations around drones and entering a country’s airspace are also challenges.

In European operations, it has been difficult to operate drones on the second major Mediterranean crossing route between Turkey and Greece because territorial waters are so closely set.

Roushan Zenooz, who travelled to Greece from the United States as a volunteer last year, says he tried to arrange for a drone to be stationed off the island of Lesbos. The idea was ultimately rejected by the Greek coastguard, says Zenooz, citing an arrangement with neighbouring Turkey not to use drones.

Zenooz had been in touch with Danoffice IT, the Danish sister company of drone-maker SkyWatch, which had agreed to a two-week project in Lesbos to see if the concept was feasible. Jacob Petersen, Danoffice’s global sales manager, says the company’s 2kg drones would have a range of 30km and cost about a third of Schiebel’s model.

“There were a lot of political issues around it, so we said if we couldn’t have approval from the government we couldn’t come and fly. As a company, we need to follow the law,” he says.

Petersen argues that laws need to change and civil aviation authorities should look for a common approach to drones, while humanitarian organisations could develop standards similar to those that regulate vehicles in emergencies.

Drones have already been used with notable success in other areas, such as earthquake relief. Patrick Meier, founder of UAViators, a network which connects drone-users in humanitarian and development organisations, says he was recently contacted by authorities in Ecuador for support following the country’s earthquake.

“Two years ago you did not have authorities requesting UAV support after disasters, nor did you have people in country who were professional [drone] pilots,” says Meier, who was able to find two pilots within the UAViators network who could help.

“What we’ve been doing is increasingly shifting towards working with local partners who are already in the country,” he says, making response quicker and avoiding problems associated with importing a drone.

“In Nepal we were able to talk to the air force and the organisation in charge of the air space,” she says. “But as we were planning to deliver aid into Syria, there was no one group we could talk to.”

Looking ahead, Mooberry says a global coordinating body needs to be set up with the direct involvement of humanitarian organisations “whose job it would be to coordinate drone-users, keep them up to date, reserve and schedule air space,” she says, to make the most of this innovative technology.

“This needs to be done – these drones are way too useful not to use them.” Child dies and 39 people are rescued after rubber dinghy which set off from Turkey hits rocks off Greek islands. 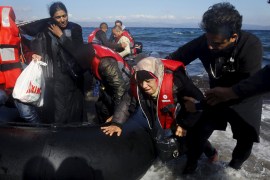