Phnom Penh, Cambodia –  In the blazing afternoon sun, Chhou Ouch looks like any other construction worker defying the heat while making multiple trips, carrying bricks to a building site.

The first detail that betrays her gender on closer inspection, are the multicoloured pyjamas the 32-year-old mother of two is sporting.

It is only after she removes her helmet and a scarf, which is meticulously wrapped around her face to shield it from the sun, that her delicate face and long ponytail emerge.

“This is a man’s job but I can do it too,” she proclaims as she takes off her gloves, revealing a hand with vanishing polish on the nails.

She is one of around 1,000 female construction workers who are helping to build rows of semi-detached villas. Hired by a local developer, they work six days a week, alongside 2,000 male colleagues.

Just a few years ago, a development project of this scale, and Ouch’s presence on it, would have been considered a rarity in the Cambodian capital, Phnom Penh. But both have now become an integral part of the urban landscape.

Today, the construction industry is the linchpin of Cambodia’s economy, rendering the capital’s skyline almost as unpredictable as its traffic – new high-rise apartment buildings and opulent gated communities seem to appear overnight.

According to the 2015 Cambodia Economic Update report published by the World Bank, as the garment industry has experienced a slowdown, the construction and real estate sectors have become the most dynamic engines of growth in Cambodia.

Experts suggest that an unprecedented number of women in this traditionally conservative society have turned to the male-dominated construction sector in order to sustain their families.

Sou Chhlonh, from the Treasury of Building and Wood Worker Trade Union of Cambodia, estimates that women make up around 35 percent of the 175,000 construction workers in the Southeast Asian country. But due to the seasonal and informal nature of their jobs, and because there is still little research on the subject, he admits, these numbers may vary.

“About 30 percent to 35 percent of workers on construction sites are woman but it’s still a problem for us to estimate this exactly as their work is not regular,” Chhlonh told Al Jazeera.

Most of them, he says, migrate from rural areas to Phnom Penh to work with their husbands as daily “unskilled” labourers, with the aim of supporting themselves and their “parents or family in their hometown”.

Many bring their children along, but Ouch, who is only two days into her construction career, says she left hers with their grandparents, “so they can study”.

She did, however, come here with her husband Ton, her sister Vanny and with “many friends” from her village in Kampot province.

“I am here to earn money for our future life. I have a farm but the rice yields are not enough to sustain my family,” Ouch says, picking up another batch of bricks.

She seems optimistic and unfazed by the lack of job security, and has a relaxed attitude towards safety on site. Like most of the workers here, although she wears a helmet – which she had to buy herself – her feet are protected from injury only by the strings of her flip-flops and the socks she wears with them.

“Flip-flops are comfortable,” she says.

Ouch does not have a contract. “This is seasonal work for me. I will go back home for the rice harvest in July. Then back again here in September,” she says, and hastily returns to her work.

Although many of the women on the site seem content, some are concerned about their future.

“I am worried about my job,” says 33-year-old Chhorn Chunta, who is tasked with cutting steel bars and carrying them to the numerous skeletons of villas scattered across the complex.

“What’s going to happen to us when the construction is over?” asks a woman from Kampong Speu province, who was previously a farmer. “I am also worried if I have an accident what will happen to me. The company won’t pay for my hospital bills.”

In a telephone interview, the spokesman for the Ministry of Labour, Heng Sour, said he hadn’t received any complaints from female construction workers and consequently couldn’t discuss their situation.

According to Adriana Siddle, a labour rights adviser at the rights watchdog CARE Cambodia, female construction workers face the same problems as all unskilled labourers. These include a lack of contracts, limited workplace protections provided by construction companies and little to no access to the protection offered by domestic laws.

“Women report a lack of access to benefits such as sick leave, paid holiday leave and maternity leave. In addition, workers are not insured. Most reported that if there is an accident, they might receive assistance to get to a doctor or hospital, but in most cases, the workers have to pay for medical care themselves,” she told Al Jazeera.

These problems, Siddle says, are further exacerbated by social norms that place a lower value on women’s contribution in the workplace, leading to “less pay, job security and opportunities for work progression and training”.

Chunta’s story is one such case. Although she has been working on the site for two years, carrying and cutting steel bars, she continues to earn $6.25 per day – the same rate as her female colleague with two days on the job – while her husband earns $8 per day for work of a similar nature.

“That’s because I have no skills,” she explains, wiping sweat off her sunburned face.

“I am only carrying steel bars. My husband is the one putting them on the ceiling.”

CARE’s Siddle agrees that the type of tasks performed by men and women on-site can differ – some women report doing intricate work that is easier for those with smaller hands, like connecting wires. But as with a lot of work that is “gendered”, she points out, “women have learned to undervalue their work”.

However, it would be misleading to assume that female employees perform the same amount of work as their male counterparts, she says: many women work harder as they also work at home.

The same social norms that undervalue women as employees, she observes, “place additional family responsibilities on them, and give them less social capacity to voice their concerns and advocate for their rights”.

This is why on top of building “houses for the rich”, as Chunta describes them, she is also a homemaker to her three children, aged three, five and 14, who live with her and her husband in one of the many shacks built by the company for its employees.

And being a working mother, Chunta reluctantly admits, can be particularly strenuous.

She usually wakes up at around 4:30am to fetch water from nearby tanks. After washing, she prepares breakfast for her family, cleans the dishes and tends to her children. That leaves her with 30 minutes of “relaxing time” before she sets out to the construction site at 7:30am.

Chunta repeats this caretaking routine, with minor alterations, during her two-hour lunch break at 11:00am and when she finishes work at 5:00pm.

“It is very exhausting but I need to endure it,” she says laughing. After all, she considers herself lucky to have a job.

But time off is limited and on International Women’s Day last month, Chunta performed her household duties and went to work as usual.

“The company didn’t notice that it ws women’s day,” she says. “The more we work, the happier the company, so maybe we’ll get a higher salary.”

The Ministry of Women’s Affairs, however, was aware of the day. When Al Jazeera contacted it for comment last month, Puthborey Phon sent an email reply. It read: “I am sorry to inform you that my team is not able to process your request. We are currently very busy preparing for the International Women’s Day.” 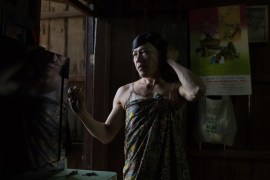 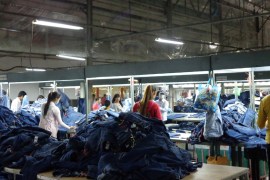 In Cambodia, workers’ rights for women slow to come