Phnom Penh, Cambodia – For Mohammed Roshid, Australia was the land of his dreams. Having fled his village in Myanmar’s troubled Rakhine state, Roshid made his way to Indonesia and boarded a rickety boat, setting sail towards the country where he hoped he would find a better future.

But Roshid never made it to mainland Australia.

Instead, he now lives in Cambodia, an impoverished nation where some locals resort to begging to survive. Roshid is one of five refugees who voluntarily came to the Southeast Asian nation under a multimillion-dollar transfer deal with Australia.

During a year-long investigation, Al Jazeera’s 101 East discovered that the other three refugees have returned to their home countries.

Roshid also wants to leave Cambodia, because “life in Cambodia is no good.” The other remaining refugee, an Iranian man, plans to return to his homeland, one of his relatives told Al Jazeera.

The Cambodian government admits the resettlement programme has been a failure.

“If you’re talking about the programme to help the refugees settle in Cambodia because of the money, it is a failure,” says Phay Siphan, a Cambodian government spokesman.

Known for its tough border policy, Australia sends all asylum seekers who arrive at Australian shores to detention facilities on the Pacific island nations of Nauru and Papua New Guinea.

With refugees unable to remain there indefinitely, the Australian government struck a deal with Cambodia, which would accept any of the refugees who voluntarily chose to resettle there.

In exchange for accepting the refugees, Cambodia received $30m in aid money plus $12m to cover resettlement costs for an unspecified number of refugees.

Human rights organisations and activists have slammed the deal, with Amnesty International calling it “a new low in Australia’s deplorable and inhumane treatment of asylum seekers”.

But in a video shown to refugees, the Australian government says that the Southeast Asian nation provides “a wealth of opportunity for new settlers”.

“It is a fast-paced and vibrant country with a stable economy and varied employment opportunities,” Immigration and Border Protection Minister Peter Dutton states in the video.

But Mouen Tola, a Cambodian activist and labour unionist, says that the Australian government did not paint an accurate picture of the reality of life in Cambodia.

“Millions of Cambodian people are still suffering from the system at the moment, so how come you lie to the people about employment opportunities, good opportunities and so on?”

Tola believes the aid money Australia is giving to Cambodia will not help Cambodians, a country ranked in the top 20 of the world’s most corrupt nations.

“Cambodia receives millions of dollars from the development partner but we don’t see where that money has been spent accountably or transparently. So personally I feel Australia is bribing Cambodia to accept those people,” says Tola.

‘No help for refugees’

Roshid says he is unable to work because he doesn’t speak the local language, Khmer, and suffers from anxiety, depression and other health problems he developed while on Nauru.

While he could attend language classes provided by the International Organisation for Migration, the agency tasked with supporting the refugees in Cambodia, Roshid’s poor health makes it difficult for him to study.

Under the Australian deal, he receives $8,000 in cash staggered over a year. Then there’s an extra $9,000 in support for accommodation, set-up costs for a business and other expenses.

The agreement he signed states that he must return these funds if he tries to go to Australia again illegally.

Joe Lowry, from the International Organisation for Migration, says the Cambodian government had given assurances that all refugees in the country would be entitled to the same benefits as those from Nauru. But other refugees say they have not received any support.

There is no help for refugees in this country like other places. They just accept refugees without support.

Mohammed Yusuf, a Rohingya refugee who came to Cambodia eight years ago by his own means, says he had not seen any improvements for refugees in the year since the deal took effect.

He is unable to get a work permit or drivers’ licence. He sells roti at a street stall to feed his family of four. Yusuf approached the IOM and the UNHCR in January to ask for support, but was told he wasn’t entitled to any.

Yusuf’s experience has Mohammed Roshid deeply concerned about how he will survive once he stops receiving funding at the end of the year.

Despite the assurances Cambodia gave the IOM, the government says it’s limited in how much it can help refugees.

The Australian government did not reply to Al Jazeera’s repeated requests for comment on the Cambodia programme. But Peter Dutton, Australia’s immigration minister, has told a local television station that the government’s border protection policy is working.

“I think the policy has been a success,” he reportedly said. “We have been able to close 13 of 17 detention centres. At the same time, we have been able to increase the number of refugees we take through the United Nations process. So restoring order to our borders and making sure we have strong border security, as we are seeing in Europe, is as important today as it ever has been.”

Roshid says he voluntarily chose to come to Cambodia, but that he made that decision because he was ill and wasn’t receiving adequate medical care at the detention centre in Nauru. After two years in the detention centre, he was desperate to get out.

But it wasn’t until after he arrived in Cambodia last November and received medical treatment that the impact of his decision sunk in.

“I had never been to Cambodia before. I didn’t know anything about Cambodia,” he said. “I was thinking to myself, ‘Where am I now, why did I come here?'”

More than 2,500 refugees and asylum seekers remain on Nauru and Papua New Guinea with no viable future there, and the Australian government is trying to find other countries like Cambodia who will accept them. Third country resettlement may be a solution for Australia, but refugees such as Roshid, hoping for a better life in Australia, remain as far away as ever from finding a new home.

From the 101 East documentary Cambodia: My New Home Watch the full film here 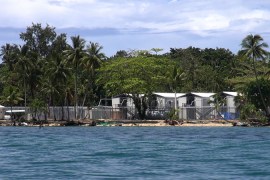 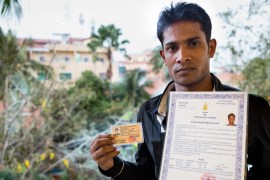 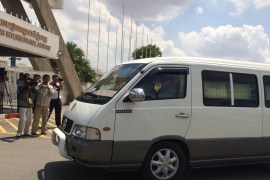 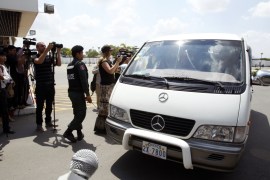 One of only four people resettled from Australian-run prison in deal worth tens of millions wants to return to Myanmar.