Mogadishu, Somalia – It is 12.45 pm. The call to prayer is blaring from the loudspeakers atop the minarets of the city’s mosques, and in the Medina neighbourhood of Mogadishu, a lady in a long red jilbab sits with her two daughters in front of her two-bedroom house. It is March, the height of the dry season, and the air is hot and humid.

In the family’s living room, the fan which used to offer respite from the punishing heat and humidity is off, its cable dangling from the electricity socket.

“The children cannot sleep after lunch because it is too hot. I cannot give them cold water to cool them because I have switched the fridge off. If we use the fan or the fridge, the electricity company will send us a large bill that we cannot pay,” Muhubo Abshir Farah tells Al Jazeera, sitting beneath the shade of a tree in front of her house.

The East African country of some 10 million people has electricity that is among the most expensive in the world. A kilowatt of electricity in the Somali capital can cost as much as $1 an hour. That is five times more expensive than in neighbouring Kenya and 10 times more than in the United States.

Somalia’s energy sector was completely destroyed following the collapse of the central government in 1991. Residents were forced to depend on  privately owned diesel generators while many were left in the dark. Currently, more than seven electricity companies operate in the city – all owned by private individuals.

City officials told Al Jazeera that the companies operate without a licence and pay no taxes. Customers accuse the electricity companies of charging them any price they want, an accusation the companies deny.

With thousands of people returning to the seaside city because of improving security after the withdrawal of the armed group al-Shabab in 2011, business has never been better for those in the energy sector. The companies use diesel generators and the low oil prices globally are leaving them with ever higher profits.

The capital’s residents are, however, publicly complaining. More than half of the country’s population, those between 15 and 64 years of age, is unemployed, and 40 percent of Somalia’s population lives below the poverty line, according to the UN.

Electricity is a luxury that thousands of families in the city can only dream of. Many households in the Horn of Africa country depend on remittances from relatives living abroad and cannot afford the expensive electricity.

“Each month, they charge me between $35 and $40. I can’t use it [the electricity] as I want because they will charge me a lot more,” says Farah. “And if you want to change companies, they will charge you disconnection fees which we can’t afford to pay, so they force us to stay with them. They are all the same.”

With the return to normality, investors are back and putting their much-needed money into the country’s fragile economy. But with high electricity bills, many investors have resorted to alternative measures.

In the same part of Mogadishu, at an ice-making factory, business is booming at this time of the year thanks to the heat and humidity.

Many families depend on this factory because they cannot use their fridges at home because of the high energy bill.

The turn in the factory’s fortunes has also been due to a decision taken by the owner. Abshir Maalin Abdi bought a diesel generator to power his factory after all his profits were gobbled up by the hefty electricity bill.

The electricity offered by these companies can also be erratic, according to Abdi.

“They give you electricity when they want and stop it when they want,” he says as he inspects blocks of freshly made ice before they were dispatched to customers.

“And in terms of cost, it is impossible to use these companies. If I were to use them, my electricity bill would increase by more than 80 percent. I would be working just so I can pay the bill they send me. I’m better off having my own generator,” Abdi adds.

But the electricity companies deny they are only interested in maximising their profits while ignoring the welfare of their customers.

In the Kilometre Four area of the city, more than 30 workers in bright orange uniforms are in a rush. It is not yet 7am, but the workers are on a tight schedule because of the queue of people waiting to be connected to the electricity grid – demand for their services has never been higher.

The company, which uses a meter system, claims to offer the cheapest electricity in the country and says its prices are affordable.

“We charge everyone for what they use. We use a meter system that calculates what the customers use. Our electricity is the cheapest in the country,” Ahmed Abdishakur Omar of Mogadishu Power Supply tells Al Jazeera.

“Today, electricity is the cheapest it has been in the last two decades. And we believe our customers can afford our price,” Omar adds.

The Somalia government, which has its hands full fighting the rebel group al-Shabab, says it is aware of the customer complaints and is looking into the matter.

“The only thing we can do and the only thing we want to do is to bring about a legislation that will monitor these companies that provide electricity. We hope that these legislations, once passed by parliament, will affect the price of energy and trickle down to the public,” Abdihakim Egeh Guled, deputy minister of energy and water resources, told Al Jazeera. Currently the country has no laws regulating the industry.

The electricity companies, following pressure from customers and with low global oil prices, say they are working on reducing the prices and hope to make an announcement soon.

The residents of the city hope the price reductions come sooner rather than later.

“I pray they start to charge us a fair price. They have made enough money from us,” says Farah, the mother of two.

“It is time they charge an honest price.” 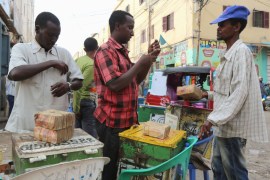 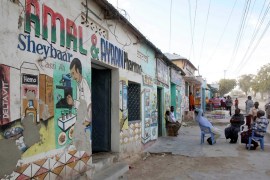 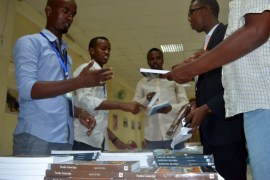 Thousands expected to attend the first international book fair in the Somali capital in more than two decades.