There was nothing new in Donald Trump’s big foreign policy address. The speech was not an outline of a Trump doctrine. Instead, it was many of the things he has said on the campaign trail, pulled together in linear fashion and written down.

That last part is important. The businessman tends to speak off the cuff at events. It leads to him wandering off topic, covering new issues before returning to his theme of making America great.

On such an important issue, this was shaped to wind through the vision of how America would approach the world with Donald Trump in the White House.

It was about showing he is a serious candidate with a grasp of the serious issues facing the USA. It was about assuring independent voters and establishment Republicans that he was ready to take over as commander-in-chief.

That’s because some of his comments have, until this point, caused some panic and alarm.

There was the idea of banning all Muslim immigration. And the suggestion that it was time to dismantle NATO. Or that Japan and South Korea should be allowed to develop or acquire nuclear weapons.

Asked before the speech what was likely to be in it, I answered having watched and listened to the Republican frontrunner quite a lot over the past few months:

READ MORE: What US elections should look like in a real democracy

Trump called his policy “America First”. It was a phrase mostly recently coined by a New York Times journalist asking him a question in March. “I like it,” he said. Now it defines his world view.

His address was 40 minutes long. He told his audience he would “replace randomness with purpose, ideology with strategy and chaos with peace”. It was delivered calmly and without the bombastic fireworks of a campaign event. This was not the place to pledge to “bomb the sh** out of” ISIL.

In many ways it was a typical Trump speech, broad in scope, short on detail. President Trump will build the world’s strongest military, investing heavily in the latest equipment and swelling manpower. At the same time he swears that force will never be his first action in a crisis.

“War and aggression will not be my first instinct. Our power will be used if others do not play by the rules. When America fights, it must only fight to win.”

READ MORE: US primaries – The King of Queens

He says he would ask for the help of Muslim allies to defeat ISIL while defining that battle as a clash of civilisations (and banning any of them from entering the US). And he says he wants to strengthen ties with allies, while calling on some of them to pay for continued American support.

Critics will point to these remarks and suggest the speech was full of contradictions. And he did say the USA had to become more unpredictable while at the same time promising to offer “a disciplined deliberate and consistent foreign policy”.

There was also a clear political message in the speech. Every recent foreign policy failure was tied to President Barack Obama and in particular Hillary Clinton. This is a preview of the battle we can expect to see later in the year if both Trump and Clinton win their party’s Presidential nominations. In particular, Trump concentrated on the attacks in Benghazi, Libya, in 2012 which saw the killing of the US ambassador and three other Americans.

One Conservative commentator was not impressed, saying the speech was poorly written, something to be expected of an average high school student. Others struck a similar tome. The overwhelming verdict for Trump on this key issue is: Must do Better. 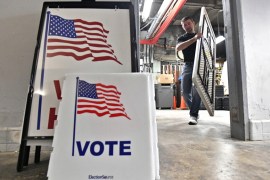