When the first yellow coltsfoots blossom, the Swedish winter will be over, as will the volleyball season. For Aida Rejzovic, a six-foot-tall centre hitter nicknamed the “blocking monster” of the elite team, Orebro Volley, that will signal the end of juggling a full-time job with her labours on the court.  Until next season, when the slog begins anew.

“My colleagues ask me why I need a job when I’m an elite athlete,” says Rejzovic just days after her team faced Stockholm rivals Sollentuna, wracking up a strong lead thanks to four ace serves within minutes.

As Sollentuna piled on the pressure, Rejzovic, who had spent two years in France and one in Germany as a professional player, did what she does best: She kept her cool and put up a solid block that kept the opposing side struggling for points. Orebro took home the first two sets with relative ease.

It’s not that making a living off sport in Orebro, a town of 140,000 people in central Sweden, is impossible, Rejzovic just plays the wrong sport. And, as her club chairman, David Olof Anfelt, would argue, because she isn’t a man. The club says it has been let down by local politicians, who since 2007 funnel most public funds to the male-dominated ice hockey and football instead of to them.

Rejzovic and the other players are fed up with not being able to support themselves despite their toil and talent, and the results they deliver.

“I train just as much as the men in the Orebro hockey club do,” she says, pointing out that her team has not once slipped out of the top league, Elitserien, with the recent game against Sollentuna an important step to securing second place this year. Yet, in the past five years, Orebro Volley has received just 400,000 kronor ($50,000) from a tax-funded pot of 35 million kronor ($4.2m), with almost 15 million ($1.8m) given to football and 10 million ($1.2m) to ice hockey.

“How can the politicians year in and year out contribute to this view of the different ‘value’ of our sons’ and daughters’ participation in sports?” asked the club’s chairman David Olof Anfelt in a recent open letter that caused a stir in the town.

A local politician admitted on the radio that he is “not quite satisfied” with this particular side  effect of how the money earmarked to promote the town through its most popular sports was being used.

“Just a sliver of the money the football club gets would make a huge difference to our team,” says Rezjovic’s coach Matilda Wikander.

Rezjovic, for example, dreams of being able to work part-time in order to dedicate the rest of her day to the game. At 29, she has many good years left on the court.

“When I used to play for the Swedish national squad, I’d have to take out vacation days just to go to training camp,” adds Rejzovic, whose coach credited her centre attacks for helping take home the tight (20-25) and crucial fourth set that handed Orebro a 3-1 win against Sollentuna.

The team’s double burden of work and elite sportsmanship stands in contrast to the many male athletes in town who get to relax and recuperate between training and games, Anfelt’s letter pointed out.

That “women’s sports” and women in sport don’t get equal treatment turns out, with a quick look at the statistics, to be endemic in Sweden despite the country’s feminist reputation. The country has come further than most, but is far from the finish line. Much has to do with the actual sports being gendered.

‘Men have been given positions of power ‘

Only three percent of ice hockey players were women in 2005, for example, although that has started to change, noted the country’s sport minister, Gabriel Wikstrom.

Ever since I was a kid, I dreamed of becoming a pro. I thought it would be glamourous, but life as a pro isn't what I imagined.

The government, Wikstrom told Al Jazeera, has to keep making equality in sports a high-profile and prioritised issue, but much of the power to chip away at discrimination lies in the hands of the municipalities – not least when it comes to giving teams access to its sport facilities, and giving access at desirable times that make it easy for people to combine competitive sports with work and family.

A National Sport Federation report in 2007 showed that neither girls and boys nor men and women were given the same quality of access – a red card in a country that prides itself on equal opportunities.

“Of course, girls and women quit sports when they’re forced to train early in the morning or late at night,” Wikstrom said. “It’s gotten better, but it’s been a structural problem because, in part, municipalities wanted to support their elite teams, and few women made it to elite level.”

That has put women in a bind. Local authorities discriminate based on performance, but the discrimination eats away at the ability to progress and perform.

Performance is not, of course, an issue for Rejzovic’s team, which has won the top league several times in the past decade. Still, its players struggle to find the time and energy to keep up the good work.

Volleyball happens to be a sport dominated by women in Sweden. For the current season, there are almost two female players per male player registered as active players with the Swedish Volleyball Federation. Other sports are far more gendered – equestrianism (87 percent), figure skating (84 percent) and gymnastics (83 percent) according to Swedish Sports Confederation statistics compiled in 2005.

Then there’s the question of leadership in sport, with a skewed 2:1 representation of men to women on the club boards, which is where the responsibility of the clubs comes into play.

“In sports, like elsewhere in society, men have been given positions of power due to age-old quota systems, but the sports movement needs to use all its talent, and [they] are missing out on what women can offer,” says Wikstrom.

He added that strong female role models had become more important than ever with the large number of people from more gender-conservative countries now moving to Sweden. He gave as an example a girls’ basketball club in Orebro, whose coach, a Swedish woman of Middle Eastern origin, has forged a working relationship with parents who now trust her to take their daughters away to games and training camps.

“Which illustrates that diversity, not just gender, also matters,” he says.

Women are not equal

While Sweden still has a few points left to score in the fight for equal sports participation, important strides have been made. That’s true also for role models. When star football coach Pia Sundhage returned home from the US, for example, to coach the women’s national team a few years back, many pundits asked her, only half-jokingly, to whip the men’s squad into shape as well.

Then there’s the question of remuneration, where differences are among the most striking in football. While male Swedish striker Zlatan Ibrahimovic earns 15 million euros ($16.7m) a year at Paris Saint-German, his compatriot Lotta Schellin in 2013 signed up to another French top team, Lyon, for a reported but unconfirmed 215,000 euros ($239,720) a year – which means that for every single euro that goes into Schellin’s bank account, Zlatan’s is earning 75 euros ($83).

“We have an odd habit of pitting men and women in team sports against each other and saying the men are better,” says Wikander, Rejzovic’s coach. “But when it comes to individual athletes, we don’t do that. Take track and field as an example: We accept that men are a bit faster, but we still watch the women’s 100 metres.”

“Why can’t we have the same attitude with team sports and say men play ‘differently’ to women rather than ‘better’?” Wikander asks.

While Rejzovic made a living off volleyball on the continent, it was accepted she’d make less than the men.

“In Europe, people often assumed we were equal in Sweden, so I had to tell them that wasn’t the case,” she says.

Back home in Orebro, any money at all would be nice.

“Ever since I was a kid, I dreamed of becoming a pro,” says Rejzovic, who started training when she was 11. “I thought it would be glamourous, but life as a pro isn’t what I imagined.” 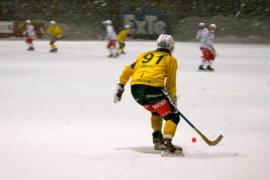 A sporting way to welcome migrants