Garissa, Kenya – It’s a sunny Sunday morning in Garissa, northeastern Kenya. Abdirahman Abdi Olow wakes up to check if his brothers made it home last night.

Dressed in a white vest, he makes his way to his brothers’ makeshift room made of dry grass just metres away from his house.

“The chances of finding them in their room are unlikely,” says the 28-year-old as he opens the tiny iron-sheet door. “Sometimes, I find dogs sleeping in there since they’ve gotten used to its emptiness.”

This time, however, he finds one of his brothers, Aden, fast asleep. He turns him on to his other side and closes the door behind him. He heads back to his house and alerts his wife to prepare breakfast for Aden.

His two brothers, Hussein and Aden, have been suffering from mental disorders for nearly a decade.

Hussein, an agricultural studies graduate, was the breadwinner of his family before he was diagnosed with the illness.

One day, nine years ago, Hussein started to complain of headaches and of “hearing too many sounds”. Some days later, the 35-year-old stripped naked outside of his house.

“That was when we concluded that our brother was mentally ill. All this was new to us,” Abdirahman says, explaining how quickly the family was stigmatised. “People judged and made us outcasts.”

Aden became the family’s breadwinner, working night shifts as a security guard. But then, in 2011, he too fell ill.

“He started complaining of people disturbing him. This was followed by him talking to himself,” Abdirahman explains. “That was when I suspected that something was wrong with my brother.”

Poor and helpless, the family started asking traditional healers to pray for the two men.

They had plans to take them to the Mathari Mental Hospital, the only public referral hospital for the mentally ill, but they could not afford it.

“I know my Somali people stigmatise such people and don’t believe it’s a medical problem,” Abdirahman says. “I respect the religious way, but I cannot leave out the option of taking them to a hospital.”

“I wish I had money,” he adds, explaining how hard it is for the family to raise enough to pay for treatment.

‘Only God can protect her’

The Mathari Mental Hospital, in the Kenyan capital of Nairobi, houses mental health patients from across the country. The facility, which doubles as a rehabilitation centre, has been criticised for their handling of patients, as well as their perceived incapacity to care for them.

In 2011, an investigative feature by CNN called Locked Up and Forgotten highlighted the plight of the patients in the poorly equipped facility, where dead bodies were found abandoned on the floor on the day of filming.

Last February, the parliamentary health committee visited the hospital and concluded that the facility was in a “sorry state”.

The parliamentarians established that there was “one female nurse in charge of 146 mentally ill male patients, some of them hardcore criminals, in a maximum security ward”.

They also said that “another nurse, also female, takes care of 53 mentally ill patients, who at times assault the staff”.

Dr Julius Ogato, the medical superintendent at Mathari Hospital, told the parliamentary health committee that the “acute shortage of staff has hampered efficient and effective service delivery. The available staff, who do not meet international ratios, are overwhelmed by the work”.

Being the sole mental health referral hospital in Kenya, the findings by the parliamentary committee worry many families who have relatives staying at the public institution.

One such family is that of Habiba Dakane. The 60-year-old mother allowed her daughter to be taken to Mathari by well-wishers after her story was highlighted by a local radio station.

“My daughter was very fine until she gave birth. Since then, her behaviours have changed and sometimes she gets violent,” says the single mother of 12.

“I have heard many negative stories about Mathari, but I have no option for now,” she adds. “Only God can protect her.”

Dakane had looked for religious leaders to pray for her daughter, but found it too difficult to travel with her.

Many Kenyans view mental illness as a spiritual problem rather than a medical one, causing them to turn to religious leaders or traditional healers for a cure.

Sixty-year-old Muhumed Abdullahi has been praying for people suffering from mental illness for more than 10 years.

Together with his oldest son, Abdullahi attends to more than 200 clients a day. He is among the few trusted religious leaders in Garissa.

“In a typical day, I get between 200 to 300 people who come to seek my help. I believe in God, and I pray for them to be healed by the Almighty,” he says as he instructs a patient to wait for him outside.

With a microphone in his hand, the black-bearded sheikh makes his way outside his house, where patients begin to file, awaiting his services.

Emaciated patients, accompanied by their hopeful caretakers, stare blankly at the sky. Abdullahi begins his therapy sessions with Quranic verses. Afterwards, he gives herbal medicines, special water with a prescription to use it twice a day. More detailed orders are given depending on the patients’ needs.

The illness can be either medical or spiritual, Abdullahi believes, and victims can seek to treat both at the same time.

But because of stigma from relatives and friends who view the illness as a curse and a bad omen, many societies tie up those suffering from mental illness for years at a time, often leading to deeper psychological trauma.

Dr David Ndetei, a psychiatrist and founder of Africa Mental Health Foundation, argues that many have valid reasons for trying to restrain the mentally ill.

“They have no option but do so,” he says, explaining that they might otherwise pose a threat to themselves and others.

In a country where psychiatrists are scarce, Ndetei urges the government to invest in mental health awareness to help curb stigmatisation.

This, he believes, would make people accept mental illness as a legitimate disorder like any other physical ailment requiring medical treatment.

“There is a huge gap left in terms of public awareness. Medication should be made accessible and also [training for] traditional healers to assist consciousness on local levels,” Ndetei says.

Back in Garissa, Abdirahman is hopeful.

“One thing I believe is that if my brothers are given medicine and good care, they would get well,” he says. 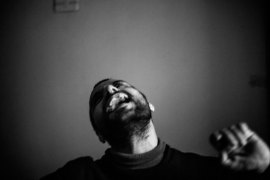 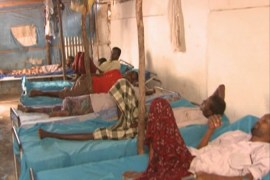 The near daily fighting in Somalia has taken its toll on the mental health of its people, doctors say.