Tirupur, India – R Gopalakrishnan cuts an unassuming figure as the chairman of a $88.4m textile manufacturing and export firm. In his small cabin in the textile town of Tirupur in southern India, he wears a plain T-shirt, trousers, and flip-flops.

Affable, with a ready smile and a slight lisp, his demeanour belies the determination and sharpness of mind which have made him one of the biggest innovators in India’s textile industry.

The son of a farmer – who left his parched land behind in 1945 to find work in Tirupur’s nascent textile industry – Gopalakrishnan, 56, remains true to his roots. The mild-mannered businessman has seen the Indian economy grow by leaps and bounds and has been part of that story.

In the 1970s, Tirupur, in the South Indian state of Tamil Nadu, became a budding town as Gujarati settlers in the area established a smattering of dyeing units. By the mid-1980s, orders for export began to trickle in. When the Indian government ushered in economic reforms and liberalisation in the 1990s, Tirupur’s fortunes began to blossom.

It is now known as the “Manchester of India”, and contributes to 75 percent of India’s textile exports, in a country that is the world’s second largest exporter of textiles after China.

As profits poured in, farmers took to dyeing and textile manufacturing with enthusiasm and the area began to show signs of the environmental impact of the industry.

India established the Pollution Control Board (PCB) in 1982 to monitor and curb air, land and water pollution brought on by its booming textile industry and the Tirupur branch of the PBC was in place by the early 1990s.

“No one knew that we were harming the environment and ruining farm lands as the textile industry grew,” Gopalakrishnan said. “No one had imagined that the coloured dyes we were releasing into the drains and rivers would destroy farmland around the area.”

Neither, in fact, did officials at the PCB.

The PCB issued orders in 1996 to the textile units to remove colour from the effluents before discharging it into the rivers. The rationale behind this order was that there was simply something unnatural and wrong about the river water turning bluish-green and sometimes even red.

At the time, the solution seemed simple: remove the colour and the problem would be solved. So companies complied.

No one realised that other chemicals in the water, apart from the colouring agents, were causing harm to crops and marine life.

Four years later, the PBC issued another order: companies could no longer discharge the colour-stripped water, but  had to store it on their land. To comply with this new rule, the companies filled large swaths of their land with the polluted wastewater, destroying the soil and groundwater. Still, many other companies continued to release effluents into the nearby Noyyal River.

By 2004, the PCB had begun to ask factories to implement zero liquid discharge. It was clear that pollution control standards were here to stay.

A few businessmen such as Gopalakrishnan and Nachimuthu Chandran, 62, the owner of another large textile firm, searched for practical solutions to accommodate the new regulations without compromising profits.

“We tied up with companies to research and make  biodegradable alternative chemicals instead of the banned hard chemicals that were in vogue,” Chandran said. “We also set up R&D [research and development] teams within our company to find solutions for zero liquid discharge.”

By then, though, farmers around Tirupur were wringing their hands in distress. Their coconut, plantain, paddy and turmeric crops were dying, destroyed by the chemical-laced water from the Noyyal. Vast stretches of land around a radius of 20km from Tirupur were barren – red earth dotted with shrubs.

In the mid-2000s the Noyyal became a terrifying sight: tonnes of dead fish floated belly-up, killed by the toxic effluents. Farmers in the area began protesting, demanding a curb on the intense pollution that was claiming their livelihood.

“We spent a lot of money on research and experimentation,” he said. “Especially once we realised that agricultural fields were getting destroyed, we redoubled our efforts.”

The textile industry was at risk, but Gopalakrishnan also empathised with the farmers’ turmoil. “My father’s life, emotions, everything was tied in with his land. They feed us,” he said. “I had to find a solution somehow.”

After the 1990s boom came the bust. By 2009, hit by the global recession, Tirupur’s exports slumped. In 2011, the second blow came: the Madras High Court decreed that all dyeing units in Tirupur, the backbone of the textile industry, must shut down until zero wastewater seepage was achieved. Overnight, all the factories closed.

The efforts of Gopalakrishnan’s team had yielded results as they came up with three stages of treatment of the polluting dyes – the biological stage (where bacteria “eat” the dye), reverse osmosis and evaporation.

With the permission of the court, his was the first unit to restart operations in Tirupur just 10 days after the shutdown, while hundreds of units remained at a standstill. His effluent treatment plant was a remarkable product of South Indian “jugaad” – meaning “innovation” in Hindi.

Simultaneously, Chandran’s team had also been experimenting with dye-consuming bacteria, spending $740,000 on the project.

“We built ‘trickling towers’ to grow seven or eight different micro-organisms,” Chandran explained. “We did not expect such results. They were amazing; the microbes ate away all the undesirable chemicals and dye,” he told.

Treating effluents with the help of ‘jugaad’

When one team tasted success, the method and results were immediately shared with other textile makers. Many in the textile community said they felt they had to take care of one another otherwise no one could survive.

Problems in the process were exhaustively discussed and possible solutions were tried.

Following the zero-discharge directive, Tirupur became an experimentation hub for pollution control techniques for a number of years until the textile makers achieved results that accommodated the new regulations.

Once the bacterial stage was fixed, these entrepreneurs moved on to the next stage, reverse osmosis, which is a water purification method used in desalination plants that removes many contaminants from water by pushing it through a semipermeable membrane, allowing only the clean water to pass through.

But there they faced some unexpected problems: the membranes would “choke” due to the high amount of contaminants and therefore weren’t efficient or durable.

A year later, after exhaustive brainstorming, Gopalakrishnan hit upon the solution of using antiscalant and ultra-filtration to lengthen the life of the membranes, gradually succeeding in extending the life from two weeks, to nine months, then to three years.

The next step in the process was to gradually reduce the chemical concentration in the effluents and recover the salt used in the dyes. A serendipitous discovery by Gopalakrishnan led to manufacturers switching to sodium chloride instead of sodium sulphite in their dyeing process – sodium chloride or common salt now could be recovered in totality from the effluents and then reused.

Enormous amounts of power were needed to run an evaporator to dry out the salt which was then recycled. In 2008 and 2009, Gopalakrishnan simply did not have access to that amount of power, so he used firewood to heat the evaporation chamber. Twenty tonnes of wood a day was burned to finish the last stage of the complex purification process.

“We did not know about coal or where to get it from,” Gopalakrishnan said.

“In 2009, someone found out that we could import coal from Indonesia. So we stopped using wood. But the boiler had to be changed when we switched from wood to coal – that cost another 500 million rupees [$7m],” he said. Today, he uses 10 metric tonnes of coal each day to heat the boiler.

Entrepreneurs like Gopalakrishnan and Chandran shared technical know-how and the results of their trial and error with other, smaller textile manufacturers.

Smaller units could not afford a separate effluent treatment plant for themselves, so shared plants were then proposed, with around 30 small units directing their effluents into one such plant, obtained primarily through government loans and subsidies. In 2014, the industry properly began to pick up again.

Today, Tirupur is demanding a “green tag” from the Indian government so that their textiles may have a better market abroad. Tirupur’s clients range from the big garment lines such as Calvin Klein, Gap, Tommy Hilfiger and others, to the low-cost domestic market. Ministerial delegations from the Netherlands, Denmark, Sweden and other countries have taken an interest in Tirupur’s effluent treatment plants.

Tirupur saves 100 million litres of water each day thanks to the effluent treatment plants, which ensure 92 percent efficiency in cutting pollution.

“In a sense, we make rain,” smiles the genial Gopalakrishnan, as he looks out on to open fields near his office. 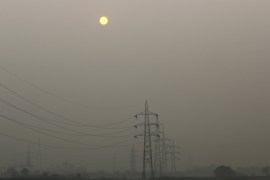 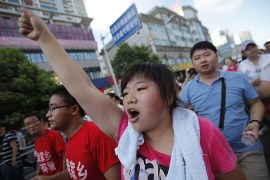 For the first time, government report highlights chemical pollution and the existence of related “cancer villages”. 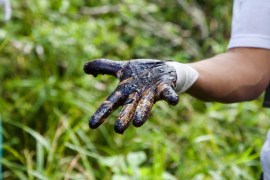 Hundreds of families caught in 22-year-long legal battle with Chevron over Ecuador pollution, with no end in sight.