Harlem, New York – Dea, 34, is a trained doula, offering help and support to mothers during and after pregnancy, and has lived in Harlem all her life.

Her family has just moved out of a large projects complex and into a new and much safer apartment building a few blocks further south.

She says that for the first time she and her husband no longer have to think about moving their family out of New York to one of the more affordable cities further south.

But while a new apartment has taken a little pressure off the family, some big concerns about raising a family in New York City remain, mostly concerned with the cost and quality of education.

Even though her four children, two boys and two girls aged between four and 14, are doing well at school, Dea and her husband, Dennis, spend a lot of time trying to get a weak public educational system to work for them.

“As a parent I would have assumed that their education was going to be better, but that’s not the case. And my education happened here, in the same neighbourhood, and before all those initiatives designed to improve education – before the charter schools, before the No Child Left Behind Act.”

Instead, Dea feels that her teenage daughters, especially, are being engaged in “a lot of busy work instead of critical thinking” at school.

Now that the children are in schools and her youngest, Aden, is no longer a baby, Dea is trying to work out whether she would be better off going back to work to bring in more income or to devote her energy to supporting her children’s education.

“These early years in school are so decisive for their lives,” she says.

It’s a hard choice to make and, at times, she says, with all the pressures facing her family “it feels like the walls are closing in”.

Dea raises an eyebrow when asked about the issues being discussed during this year’s election campaign, which she calls “a show without much substance”. Those that concern her, such as the quality of education, have hardly been addressed, she says.

New York is not a swing state; it has consistently voted Democratic since 1988. Still, Dea will go and vote out on principle. 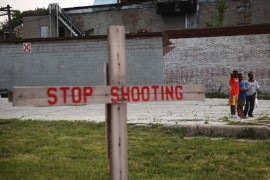 Survival Mode: Growing Up With Violence

Fault Lines examines the psychological toll of violence on children growing up in Chicago’s most dangerous communities.