Easter Island, Chile – The Rapa Nui of Easter Island are a people of the ocean – born beside it, raised on it and fed by it. Now, debate has arisen about how best to protect it.

The Pew Charitable Trusts, a Washington-based NGO, is working to create the first generation of fully protected marine parks around the world, including one surrounding Easter Island that would stop illegal fishing and protect the 140 species exclusive to its waters.

But many island residents, especially the indigenous Rapa Nui that make up half of the 6,000 people living there, are worried that the park and reserve will do more damage than good.

Fishermen such as Mae’a Pakarati, 20, say they worry that these regulations will prevent them from feeding their families, and possibly from making a living. Most tuna are caught beyond 50 nautical miles, says Pakarati, which would make it hard to bring in enough fish on each trip.

Forrest Wade Young, a lecturer in political science and anthropology at the University of Hawaii at Manoa, said the development of a marine park managed by international organisations rather than self-determined by the Rapa Nui is in violation of numerous articles of the UN Declaration on the Rights of Indigenous Peoples.

Among those articles is their right to freely pursue their own “economic, social and cultural development,” as well as to conserve and protect their own lands, territories and resources.

“The state construction of a marine park,” Young said, “should be understood as a political strategy to bolster state control and increase Rapa Nui dependency in standard colonial terms that is not only legally wrong, but disgraceful and disgusting in a 21st century that is supposed to be post-colonial.”

Sensitivity to state dependency is high among the Rapa Nui people, some of whom said they do not consider themselves Chilean and refer to non-indigenous residents of the island as “continentals”. Many claimed that the country’s 1888 annexation of the island has been made void by Chile’s repeated violation of the agreement made at the time.

Maximiliano Bello, a spokesman for PEW, said that their organisation has been working with the Rapa Nui people on the marine park for the last four years, and would never pursue anything they didn’t agree to.

“The Rapa Nui are a very strong and well-organised community and it would be very difficult to convince them or the government to do something they didn’t want to do,” Bello said.

Rafael Tuki Tepano, an elected representative to the National Indigenous Development Corporation and a member of the Rapa Nui Parliament, which is trying to obtain greater autonomy for Easter Island, told the Chilean news site El Desconcierto in October that the request for a marine park was not truly an initiative of the Rapa Nui people, but rather a packaged proposal from PEW that “simulated representation”.

“We want to protect the ocean and avoid illegal fishing and depredation,” Tuki told the newspaper, “but with respect to the autonomy and benefit of the rights of the Rapa Nui people, and not a foreign, transnational NGO.”

Leviante Araki, the president of the Rapa Nui Parliament, said that they plan to fight the marine park in the near future, but did not say how they would go about doing so.

Learning from the ancestors

In August 2015, Mesa del Mar, a committee of Rapa Nui responsible for determining the best ways to protect the island’s waters and which has been working with PEW, sent the proposal for the park and reserve to President Michelle Bachelet. Bachelet announced her approval of it in October. The Rapa Nui people will cast a final vote later this year, which would legitimise her presidential decree.

Sara Roe, the president of the Mesa del Mar, said she expects it to pass because people care about protecting the island’s waters.

“We want to make it so only Rapa Nui are fishing here,” she said, “and other people and freighters can’t come in to fish. We only want ancestral fishing.”

“Why can’t we go back and copy that way of living?” he asked. “In doing so we can have an abundant amount of fish. People don’t know their history or understand the objective, which is to protect one part so the other part can live. This is not a prohibition.”

Poky Tane Haoa Hey, a representative for the Commission for the Development of Easter Island, said he suspects that the park might result in foreign industry in the area.

A similar worry was realised in 2012, when members of the Hito clan claimed that they were forced off ancestral land to make way for a German-owned hotel.

PEW’s Bello said one goal of the marine park was to stop illegal fishing that their satellite data shows is “probably” happening.

But Hey said he wanted to see more studies done of the island’s waters to make a more informed decision, and he thinks an alternative solution – one that protects marine life as well as the local fishing industry in a way that allows the Rapa Nui to look after its own waters – can still be found.

Roe said the Mesa del Mar continues to work with Easter Island commission, PEW and other institutions within the Chilean government to ensure that is the case. 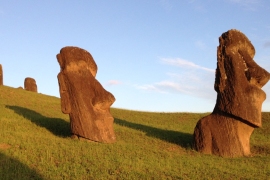 The Fight for Rapa Nui

Can the Easter Island’s indigenous Rapa Nui win the fight for independence from Chile to protect their land and culture? 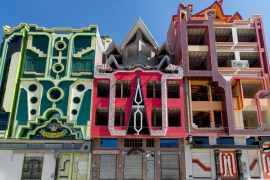