But as my legs are pumping and the adrenaline is thumping, I turn and see something that makes my blood turn cold and time stand still. I see a man – made massive with body armour and a helmet and a baton – throw his shoulder back and smash the full brutal weight of his aggression into the face of an oncoming woman.

She crumples to the ground, but I don’t even see her hit the floor because I’m running and I’m thinking that this isn’t what I signed up for and I don’t want to be here and Christ, I’m just so scared.

Because I am not an activist. This isn’t what I do. I’m a relatively normal middle-aged chap who does clicktivism when he can find the time. Direct action is not my thing. I’m not cut out to be here, running with hundreds of people across the fields of the Rhineland to try and close for one day a sodding great lignite mine.

After breaking through the police line, we begin to pull back together. Those of us who can see lead those blinded by pepper spray. We keep walking, quickly re-coalescing back into the protective mass that 200 determined people can be. But I’m feeling very shaken.

This is so unlike anything I’ve experienced. I wonder how I could have been so naive. What was I expecting when I signed up to gatecrash Europe’s biggest source of CO2 emissions? A welcoming beer and a hug?

I want to escape this absurd situation, but then I realise that beyond the fearful chatter of my thinking, I’m committed. We all are. Others will be feeling all of this, but we have nothing but our resolve and our numbers. I want no part in eroding what is our only strength.

Incredibly, we soon make it to the edge of the mine. The scale is barely comprehensible. It stretches a full 20km into the distance. It’s 12 long kilometres wide.

I find it hard to believe that we, as a collection of small, frail human beings can really shut down a problem of this scale. In truth, we don’t know yet if we can. But we’re going to try.

Over 1,000 individuals are marching in four groups towards the mine; four fingers of resistance snaking across the Rhineland. We must look incredible from the police helicopters in the air.

But what the police helicopters won’t see is how many of us are doing something like this for the first time. People like me who have never experienced police brutality or the terrifying experience of breaking through police lines. And why are there so many of us here? What is it that compels us normal, law-abiding citizens to put our liberty and safety at risk?

I think the answer lies in the urgency of the climate challenge and the feeling that action of some kind has become a moral imperative. We feel we are not acting simply for ourselves, but for our planet and our children. We feel the anger, sadness and incomprehension of those future generations who will look back at us with incredulity. “What a beautiful world,” they will think. “What kind of madness made our parents trash it?”

Together, we flow over the top of the mine and down towards the diggers. We are singing and buzzing with a mixture of disbelief and hope. Nonviolent and unstoppable, giddy with elation and adrenaline. The fear begins to recede and my attention widens to appreciate this incredible place. To our right, an endless cliff winds around the rim, an artwork of sandy pigments gouged with the striations of digger teeth. To the left, the mine drops down into the distance in a series of terraces, each leading deeper into the earth that gets darker and darker then turns to black. Across the pit roam the diggers: unimaginable beasts with bucket teeth and vast steel throats, gouging and disgorging the coal onto 16km-long conveyor belts.

Time goes weird and space gets warped inside the mine. I only dimly recognise the distant mine jeeps of coal company RWE as a threat. As the jeeps pull closer and clamour to a halt in a cloud of orange dust, as the doors open and black figures jump out, it dawns on me slowly, thickly, stupidly, that the violence is about to start again. We form a dense crowd, holding arms, still walking quickly towards the police, who are putting on their helmets, drawing their batons and unholstering those burning cans of pepper spray. As their faces disappear behind visors, they lose the last vestiges of their humanity. We are marching towards a squadron of machines.

Self-organising and intuitive, our finger spreads across the length of the terrace, arm-in-arm and hand-in-hand. Suddenly, it is the police who are trapped. We are, literally, a long white line in the sand.

Today, this mine has become a place where every moment is symbolic. State police travel in corporate pick-ups. Black uniforms beat white boilersuits. Songs and chants meet batons and pepper spray while diggers gouge the earth and wind turbines salute the sky. Together, we stand against the vested interests and distorted economics of the coal mine: a living testimony to the power of what’s possible when collection and conviction combine. It’s hard to overstate the importance of our conviction that our action is moral and just. It’s the base from which we act. It binds us to each other and connects us with the millions of unseen supporters around the world.

So, I’m acting as fast as I can; running from the police, running from my disempowerment, running from my apathy and fatalism. I’m running and dodging batons and pepper spray and I’m more primaevally, viscerally terrified than I have ever, ever been.

But for the police and for RWE, we are obstructing a legal corporate entity from going about its business, and we have to be stopped. When we see a crowd of RWE jeeps in the distance, we break our line and huddle once again into our protective mass. The jeeps behind join those in front, and police break over us in a crazy, frantic, violent melee.

I’m running, but my legs are shredded by the terrain and the heavy rucksack. Then I’m face down in the sand. I don’t know what has happened. I look up and see wave after wave of people flowing past, all trying to go on, all trying to avoid stomping on me. There is nothing more but to close my eyes and huddle into a shameless foetal ball. My face is burning. My left eye and my hands are on fire. Pepper spray hangs suspended in the air.

As soon as I’m able, I look up through my one good eye and see people nearby crying out in pain. The police are busy wrenching arms behind backs and strapping them tight with cable ties. The air is full of fear and adrenaline and fury: “Sit down!” “Stay there!” “Don’t move!”

So I lie there.

Unfathomable time passes and, eventually, the situation calms. The police have us kettled. My pepper wounds are limited. I’m one of the few who is uncuffed and mobile, so I’m able to help tend to people and replace the relentless fear and terror of the past few hours with something so much warmer and nourishing.

As we go about helping each other, the police remove their helmets and one policeman hands me a bottle of water to help rinse someone’s eyes. They have become human again. We are no longer a defiant, running protest, and the police are no longer brutal enforcement machines.

We are instead a mutually frazzled group of people in the bottom of a vast, multihued hole in the ground, our human scale dwarfed by the enormity of the mine. We find out that many of the men and women encircling us agree in principle with our protest. It’s a pretty odd thing to hear that – in spite of the brutal reality of the past hour – we are all just playing our parts in a much wider political game.

At some point, we learn the mine has been completely shut down. A cheer echoes up from the pit. We’ve just put a halt to one of Europe’s biggest sources of CO2 emissions. The machines which normally carve brown coal from the earth 24 hours a day have gone silent, and RWE, the EU’s most carbon-intensive energy conglomerate, is losing phenomenal amounts of money.

The rush of victory fades into the passing hours of the day. The police begin to process us, someone juggles rocks, someone starts hands-bound-behind-back yoga, some read, others invent revolutionary quizzes. The atmosphere is peacefully resistant. I feel surrounded by amazing, inspiring people.

Eventually, we are taken out of the mine in prison vans and are transferred into municipal buses to join hundreds of others. Sharing stories, our collective exhaustion is cut with moments of connection that will stay with many of us for life. Our destination turns out to be a police station 50km away in the city of Aachen, where we are set to waiting in the buses.

The hours drag endlessly into the night before all of a sudden, the news comes that we’re being taken to the train station and set free. The police are not even going to try and identify us. The bus erupts in ecstatic jubilation, cheering and singing; the exhaustion and fear and apprehension are banished as though it had all been a dream and are replaced with heady, giddy victory. It’s hard to believe.

For the past 24 hours, I have been a vagrant from my regular life, experimenting with a role both unfamiliar and terrifying, never quite knowing if what I was doing was worthwhile. But on the streets of Aachen and across the media, Ende Gelande is met with approval and respect: Thousands of everyday people share our concerns. If every one of those people feels inspired to get involved in even some small way, I would rush back into the pepper spray and batons 10,000 times over.

This action for me is proof of how inconceivably powerful we become when we begin to act from our collective self. I hope that we are entering a period which will be remembered as a time when normal people got together and did extraordinary things. And so I sit on the midnight train surrounded by revelry, sharing a beer and an intense philosophical conversation with someone I’ve just met, and wildly, madly, foolishly, I get to thinking that perhaps there’s hope for this crazy species of ours.

The blog first appeared on 350.org.

Unfortunately, since first publishing a longer version of this piece on his blog, Ben Winston passed away. 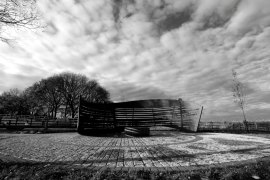 British coal, the end of a mining industry

A move towards renewable energy has left collieries and their employees out in the cold.