In recent years, migrant men from poor countries in Southeast Asia who were forced to work on Thai fishing boats have begun to come forward, revealing a dirty secret that powered the world’s third-largest exporter of seafood.

Thailand’s $7bn industry has in part been built on the backs of trafficked labour, with thousands of men from places such as Myanmar, Laos and Cambodia being sold into slavery.

The United States consumes more of Thailand’s catch than any other country. According to investigations by the Associated Press and The New York Times, the ill-gotten fish is known to have entered the supply chain of popular brands such as Chicken of the Sea tuna and Fancy Feast pet food.

While reporting for the film ‘Seafood Slaves’, Fault Lines connected with dozens of men in Indonesia who were waiting to be repatriated to their home country, Myanmar.

Since 2011, about 1,500 men have been repatriated back to Myanmar. According to figures from the Bangkok-based, anti-trafficking group Project Issara, which has examined 478 of those cases, on average, the fishermen have been given only $66 in compensation for each month they were enslaved. Some 88 percent of the migrant workers received less than half of the salary they were promised – or even worse, no pay at all.

In January, Fault Lines spoke to a middle-aged man from Myanmar at a camp set up for trafficked fishermen in Ambon, Indonesia. At that time, about 81 men at the camp were still waiting to collect their wages and return to their homeland.

This is a translation of the story he told of his experience working in the Thai fishing industry:

When I lost contact with them, I was disappointed. I asked the boat’s captain if I could go back home, but he wouldn’t let me go. Later I ran away when we docked, and he asked police to arrest me and send me back to the boat. When I got back on to the boat, he beat me.

When some of my repatriated friends inquired for me, I got back in phone contact with my family. I had three or four conversations with my daughter, but I didn’t have enough money to refill the phone again. She asked me to come back. I told her, I was waiting for my money, for them to pay my salary. But it has been one year now, and I keep waiting and waiting.

My wife left. She got remarried. She didn’t know that I was in Indonesia. I couldn’t contact her. She might think I’m dead. I got married when I was 30. I miss her. I miss my children, too.

I have been staying here more than a year. I don’t have money. I do some work at a grocery store, and they give me food. I stay here because I can’t go back. Nobody wants to stay here. It’s not the same as my own country. I have become merely a beggar now.

I want to see my children and I want to see my siblings, too. I don’t know how long I have to wait. We can only go back when they [the International Organization for Migration] send us back. I really want to go back home.

I have never worked such a job before, and I wasn’t skillful in the beginning. The captain beat me with a stingray tail; he would beat me with anything near him. While we were sorting fish, he would sit on the upper deck and throw a lead sinker tied to a rope at us. That’s how we were tortured.

The worst condition was when there were big waves. If we got a large amount of fish at the same time, we couldn’t take breaks. We were not allowed to eat. We had to eat secretly, and if the captain saw it, he would beat us. He only worried about his fish being rotten, so he forced us to work. He didn’t let us rest even when we were sick. He forced us to work like oxen.

They keep all the big fish. They threw away the small fish. If we got big shrimp, we were not allowed to eat them. If we were to steal and eat the shrimp, he would beat us and deduct money from our salary.

I blame only the captain for what I went through. He’s the one who forced us to work like oxen. I was sorting nets once, which involved climbing up to the mast. When I came down, he said, “Why you work so slow?” And he beat me with an iron pipe. He kept beating me during 10 years of work.

There were six crew members from Myanmar and some Cambodians and Thais on board. When the boat went back to Thailand, the entire crew was left onshore because the captain didn’t want to pay us money. The captain, mechanic and other Thai crew, about three to four guys, went back, leaving us behind.

The Thai company frequently told me they would pay me, but it has been a year since they told me that. I don’t know much about how they profited but I want my salary back.

I asked them how much I would get. They said I would get 10,000 baht [about $280] since I also worked as a cook. But I don’t even have clothes now. I have to take clothes from others. If they had paid us money regularly, my family would not have fractured.

Although I came to work, my family couldn’t eat from what I have earned. My family was broken apart. Do you understand that feeling? My life was destroyed. I can’t see my children. I lost my wife.

I can’t even express my feelings in words. It is very painful. I hate those Thais. If I could bring that captain here, I wouldn’t take money. I want to beat him in the same way he beat me. I want to sacrifice my life to take his life. 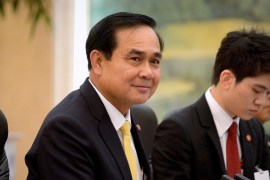