Calais, France – Saad al-Kowaili was born in Kuwait, one of the richest countries in the world, but he now lives just outside the French city of Calais at a refugee camp known as “the jungle”.

A member of Kuwait’s stateless Bidoon community, Kowaili joined the exodus of people fleeing the Middle East for Europe about seven months ago, after a run-in with a policeman cost him his livelihood.

The 17-year-old made his living selling music CDs outside a mall in Kuwait city until the officer confiscated his goods and ordered him never to return.

Despite an intense argument and pleas for the policeman to return his wares, Kowaili accepted that as a Bidoon without citizenship, he had little ground to stand on.

“I didn’t want to show him I was crying, but inside I was crying … I was burning,” Kowaili said.

It was in that moment that he decided that he had no future left in the country of his birth.

The teenager is one of about 300 Bidoon – including women and children – living in the Calais camp, with dozens more based in the Dunkirk refugee camp nearby.

Like many residents of the “jungle”, Kowaili was eager to show Al Jazeera the living conditions in his new home.

“Look at this, we’ve been bathing in this tiny room for six months … is this humane?” he said, pointing out a tiny shack containing a barrel of water and a plastic stool.

The group’s sleeping conditions were little better, with around a dozen men sleeping head to toe in rickety, wooden huts and tents that doubled as storage areas for food and other supplies.

The Bidoon, who make up more than 100,000 of Kuwait’s population of three million, say they are the descendants of Bedouin tribesmen who failed to register for citizenship during the formation of the state in the 1940s through to the 1960s.

However, Kuwait’s government considers them the offspring of illegal economic migrants from the neighbouring states of Iraq and Saudi Arabia, and refuses to grant them Kuwaiti nationality.

The term “bidoon” literally means “without” in Arabic, but has come to be used for the community of stateless Arabs living in the Gulf state.

While not all Bidoon live in poverty, they do not receive benefits set aside for citizens, such as welfare payments, healthcare, and free education.

Impasse in the ‘jungle’

Most of the Bidoon who spoke to Al Jazeera in Calais said they left Kuwait after being arrested for taking part in protests demanding citizenship.

Abdullah al-Anzi, a Bidoon resident of the “jungle”, showed Al Jazeera scars he said were from beatings he endured from the Kuwaiti police after he was detained in 2013.

“I was arrested after a rally and taken to the police station. They hung me upside down by my feet for hours,” Anzi said.

“I was released after three days but my brother has been imprisoned for years.”

Anzi, like the other Bidoon in the northern French camps, obtained forged travel documents before making his way through northern Iraq to Turkey and later Europe.

The group told Al Jazeera they had been intent on reaching the UK because the country – the former colonial power in Kuwait – understood the plight of the Bidoon and had granted asylum to members of the group before.

Instead, the Bidoon have found themselves in an impasse – unable to leave the squalid conditions of the Calais “jungle” or to return home.

Occasionally, the men have attempted to breach the security gates at the nearby Calais ferry terminal in an effort to reach England, but the breaches have been put down violently by French police.

The youngest of the group was eight-year-old Najm al-Anzi, who lives at the camp with his father and said he was injured during the clashes.

“I was hit on my back with a baton and breathed in tear gas… it still hurts when I touch it,” he said, lifting his jacket to reveal his back and the now fading bruises.

Najm, whose grandparents live in the UK, spends most of his time playing out the day with aid workers and has not been to school since arriving in the camp.

Kowaili said he hoped Arab Gulf leaders would open their countries to the Bidoon after hearing about their plight but until that time, the Bidoon have no choice but to take desperate measures to reach England.

“If you are Iraqi, you go to Iraq, if you are Syrian, to Syria, but where do we go?

“Where do they expect to send us back? We have no country, we are Bidoon, stateless.”

Rights groups have criticised the Kuwaiti government for its failure to resolve the Bidoon issue.

In 2014, the state offered the Bidoon citizenship in another country, the Comoros Islands, a tiny state off the coast of Mozambique, about 2,800 miles away. The Bidoon are hostile to such attempts.

Amnesty International’s Drewery Dyke told Al Jazeera that while statelessness was not in itself a ground for seeking asylum, Kuwait’s Bidoon have been on the receiving end of a government crackdown in recent years and many live in abject poverty.

“In the 2011 to 2013 period, many Bidoon spoke out for citizenship rights. In a few instances, the government allowed demonstrations to be held, but not for long and not in any number…they were largely crushed and those who took part were tried,” Dyke said.

“In one the richest countries on the earth, we have conducted interviews with poor Bidoon, in houses with corrugated iron roofs, very basic sanitation; sitting on carpets covering flooring that was, in fact, the ground.”

The Kuwaiti embassy in Paris told Al Jazeera it would not comment on the allegations of abuse made by the Bidoon in Calais and only dealt with “issues related to its citizens”.

The Bidoon of Calais said they felt rejected and robbed of their entitlement to Kuwaiti citizenship. Yet despite the treatment they received, they continued to feel a strong sense of patriotism towards the state.

The area of the “jungle” housing the Bidoon is adorned with Kuwaiti nationalist graffiti.

Kowaili entered one shack and stood next to a drawing of the Kuwaiti flag.

“My mother and father, my grandparents and theirs were born in Kuwait… you love the country you’re from regardless of what it does to you,” he said pointing out the opening verses of the state’s national anthem written beneath it:

“My country Kuwait, may you be peaceful and glorious… may you always enjoy good fortune.” 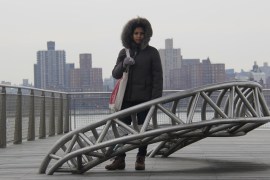 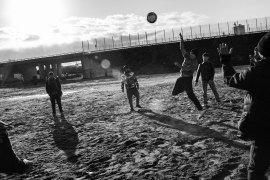