Dublin, Ireland – This week Irish people mark the centenary of the Easter Rising with commemorations across the country lasting until April 24. The uprising against the British Empire, which took place in Dublin and other cities and towns in Ireland during Easter week in 1916, marked a turning point in Irish history.

On Easter Monday, 100 years ago, rebels seized buildings across the capital and declared an Irish republic. But the empire responded and 485 people were killed before the rebels laid down their weapons and surrendered.

Hundreds of thousands of people gathered in Dublin on Sunday to mark this anniversary in what was the largest commemorative event in the country’s history. President Michael D Higgins laid a wreath at Kilmainham Gaol, where 14 of the 16 rebel leaders executed by the British were killed by firing squad.

“The nation has journeyed many miles from the shell-shocked and burning Dublin of 1916,” said the president. “We can see that in many respects we have not fully achieved the dreams and ideals for which our forebears gave so much. A democracy is always and must always be a work in progress, and how we use the independence we have been gifted will continue to challenge us, morally and ethically.”

Further commemorations are planned to remember all the victims throughout the month.

Al Jazeera spoke to some key figures in Irish society about the significance of these events for Ireland today.

Michael D Higgins was elected to the Irish presidency in 2011. He is the ninth president of Ireland, an author, poet, politician and sociologist who has been heavily involved in the 1916 commemorations.

“No matter what way you view it, 1916 is a major foundational event in terms of the Irish state, as it has emerged.

“Nineteen sixteen always played an important role in my life. For the 75th anniversary, I participated as a poet in an event called ‘The Flaming Door’, which was ran by poets and took place at the GPO featuring around 100 readings.

Later that day in Kilmainham gaol, where 15 leaders had been executed in 1916, there was a concert to honour those victims. It was an event not organised by the state, but by the cultural community. For me, 1916 is much easier to deal with than the civil war, which took place in Ireland between 1922 and 1923.

“After 1916, some families had members who died in the Somme and others who died in Dublin. Then in the civil war, these families were divided again, as was mine. It did terrible damage. When civil wars happen as a result of legacies of empires, people do unto each other what they had done unto them.”

Paddy Cullivan is a celebrated Irish entertainer who created an audiovisual spectacle for the 100th anniversary of the Easter Rising called ‘The Ten Dark Secrets of 1916,’ which he will perform in locations across Ireland from on April 24 onwards.

“I chose the actual date of the Easter Rising to kick-start the performances, which will involve imagery, historical references and lots of music and song because that’s when it actually happened, rather than some lunisolar calendar event.

“What I find most interesting about the Rising commemorations is that we don’t even have a government in place this week, because no one got a majority vote in the recent elections. In my show, I will be drawing out fundamental changes that need to happen in Ireland.”

Aoibheann McCann is an Irish actress, who is currently starring as suffragette and activist Maria Winifred Carney in a film, which is part of the GPO Witness History exhibition, a flagship visitor attraction at the General Post Office in Dublin, the headquarters of the rebels during the 1916 Rising.

“Maria Winifred Carney was an incredibly strong and admirable woman who was famous for entering the GPO with a typewriter and a Webley revolver.

“After the leaders of 1916 surrendered, she and along with some other female rebels were sent to prison in Ireland and later in the UK.

“I’m very proud to have played her and am glad visitors get to know who she was and what she fought for. These women were soldiers, who fought for human rights and women’s rights and now 100 years later, we are still fighting for equality in Ireland, especially in relation to our archaic abortion laws.”

Centenarian Sir Jack Leslie will be celebrating his 100th birthday this year. The World War II veteran, ex-prisoner of war was born in New York in 1916.

“My family and I travelled over to Ireland where we settled in Castle Leslie on the Northern Irish border. My father Shane Leslie supported the ideals of Irish nationalism.

“Before the Easter Rising took place, my father was recruited to aid the Irish-born British ambassador in Washington. When members of the rebellion were sentenced to death, they urged for clemency towards them.

“Some of the rebels had US connections, most notably Eamon de Valera, a senior commander were spared execution. He went on to be Irish Taoiseach, president and one of the most divisive figures in Irish history.

“After the rising, de Valera was made godfather to my sister Anita. Because my father’s first cousin was Winston Churchill, he was her other godparent. I even have a picture of them all together somewhere.”

Turtle Bunbury is an award-wining author and historian based in Ireland, whose book “Easter Dawn, the 1916 Rising charts the fight for Irish independence from the landing of guns for the Irish Volunteers in 1914 to the arrests and executions that followed the Rising.

“As a historian, the Easter Rising is of great interest to me and has been since I was a child growing up in County Carlow in Ireland.

“A great lady who had an immense interest in Irish historical events half raised me and since I was 13, I have been interviewing historical figures. I wrote the book, because I was inspired by the extraordinary alliance of men and women who sought to overthrow the British authorities, who had ruled the island for 800 years.”

Fiach Mac Conghail is the director of Dublin’s famous Abbey Theatre, which was founded in 1904 and played an integral role in the Easter Rising in 1916.

“We have created a programme ‘Waking the Nation,’ which will bring together some of the finest actors, writers and theatre makers in the world in order to reflect, interrogate and provoke.

“It’s an extremely exciting and challenging time to be in this role. We not only want to pay homage to the rising historically and culturally, but we also want to reflect on Ireland today.

In April 1916 members of the Abbey acting company left the theatre to join the Easter Rising. The first rebel to be killed in the rising was an actor. Back then theatre was the only platform for spreading ideals, now there are a multitude of them, yet theatre still holds an important place in commemorations this year.”

Jim FitzPatrick is an internationally acclaimed artist whose two-tone image of Cuban revolutionary Che Guevara from 1968 became a symbol of resistance to oppression. He has just completed a series of the seven signatories of the Proclamation.

“The paintings are my most important to date. These men died for our freedom, so I want everyone to remember their names. I felt compelled to create something that would not just honour these men, but also preserve their passion and courage and ideals.

“Unfortunately, 100 years after 1916, I don’t think these ideals have been honoured. I am also painting a series of the women of 1916. In my hand is an image of Countess Markievitz, who played a seminal role in the rising.” 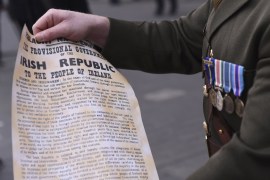 Thousands march in Ireland to commemorate the 1916 revolt that led to its independence from Britain. 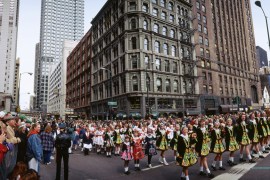 Are memes calling the Irish “the first slaves” an attempt to derail conversations about slavery and modern-day racism? 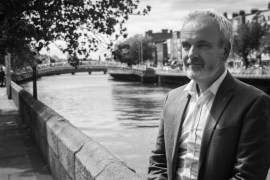