Tokyo, Japan – Since his return to power in December 2012, Prime Minister Shinzo Abe has sailed with remarkable smoothness through the usually choppy waters of Japanese political party politics.

He has already led the ruling party to three landslide victories in national elections, and if he succeeds again in the House of Councillors elections this July, his ruling coalition might gain two-thirds majorities in both parliamentary houses and could push through just about any legislation it desires.

For Abe and Japanese conservatives like him, this summer will present an unparalleled opportunity to rewrite the nation’s pacifist constitution and to reshape the education policies, business practices, and the political culture of the Japanese nation according to their own vision, often drawing their inspiration from those elements of pre-World War II Japan that conservatives wish to revive.

For the defenders of the pacifist culture and moderate legaciesof post-1945 Japan, however, the current juncture is not one of opportunity at all, but in fact one of the deepest crises of democracy that the nation has faced in 70 years.

It is in this context that Japan’s No 1 and No 3 opposition parties – though divided in many of their policy preferences – came together on Sunday to form a merged political party. The new political party will be called Minshinto in Japanese, which will be rendered into English as The Democratic Party (DP).

At the founding convention of the DP held in Tokyo, Secretary-General Yukio Edano painted a dire picture of the current situation. “The Abe administration is destroying constitutional government, democracy, and the livelihoods of the people. There is not much time remaining to save Japan,” he said.

Public opinion polls suggest that the new opposition force still has a very long way to go. A recent Sankei Shimbun-FNN poll put Shinzo Abe’s ruling party at a 36.7 percent support rate and the new DP at only a 12.8 percent rate.

Almost no analyst believes that the DP can achieve its overall goal this year of becoming a party that could decisively defeat Abe and form its own government, but the more realistic – and many would say necessary – objective is to at least prevent Abe from gaining super-majorities in both houses of Japan’s parliament, which would make him virtually unstoppable. A majority of two-thirds by the ruling coalition, according to Japan’s parliamentary system, would allow it to pass any desired legislation, and even at the committee level pass its policies with minimal disruption as it would control most of the assignments and debate time.

As part of efforts to fulfil this blocking role, one of the few opposition politicians to draw blood from Abe in recent parliamentary debate, Shiori Yamao, has been catapulted into the position of policy chief of the DP.

Yamao, a 41-year-old second-term House of Representatives member, has become a rising star after embarrassing the prime minister in debate over the lack of daycare facilities for working mothers and Abe’s absence of a policy to address that shortcoming.

More broadly, however, the new DP shares one of the same vulnerabilities as its predecessor, the Democratic Party of Japan (DPJ) – a lack of a consensus among its politicians about most specific policy issues or even whether the party should be identified ideologically as basically conservative, moderate, or liberal.

House of Representatives member Takatane Kiuchi responded to this concern, telling Al Jazeera that “the important thing is that we need to become the ruling party again. We can think about the policies then.”

Policy coordination is likely to become even more difficult as the DP is expected to absorb several liberal micro-parties in the months ahead.

Another challenging issue for the DP is what posture to take towards the Japan Communist Party (JCP), which has recently become the second-largest opposition force and often polls a respectable 5 percent public support level nationally.

On the one hand, the DP cannot afford to fight a two-front battle against both Abe’s ruling party and the Communists and still expect to have hope of making headway. Election cooperation with the Communists, therefore, does seem a necessity.

On the other hand, Prime Minister Abe has already been denouncing the Democratic Party-Communist alliance, causing considerable annoyance to the many conservative politicians within the opposition.

For his part, Kiuchi says: “I am allergic to communism and so are all of my supporters.”

But he then adds that the practical policy of DP should be to proclaim disdain for Communists in public while working with them closely “under the table”.

Michael Cucek, adjunct professor at Waseda University and renowned analyst of Japanese politics, on the other hand, told Al Jazeera that he believes a better approach for the DP is to go to the public and “explain what the ‘constitutionalist alliance of parties’ means and why cooperating with the Communists makes sense”.

Indeed, as discussed during the convention, the basis of DP-JCP cooperation is their shared perspective that Prime Minister Shinzo Abe is threatening the very foundations of constitutional government in Japan and that he must be stopped very soon. They also agree that the controversial security legislation passed last September is unconstitutional and must be abolished as soon as possible.

Members of the public did not express any enthusiasm over the establishment of The Democratic Party in response to inquiries from Al Jazeera.

A 47-year-old man on the streets of Tokyo, walking near the venue where the new opposition party was being formed, said: “The DPJ was a very irresponsible party while they were in authority, so I don’t want to see them return.”

A 25-year-old man wasn’t as opposed to the DPJ government of 2009-2012, but stated that he wasn’t excited about politics generally and that he felt “nothing is going to change” with the establishment of the new political party.

From this weak starting point the liberal and centrist opposition parties are entering what could be the decisive struggle over Japan’s pacifist constitution. 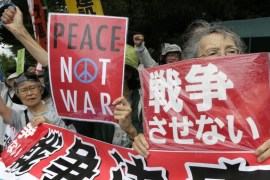 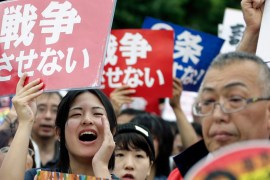 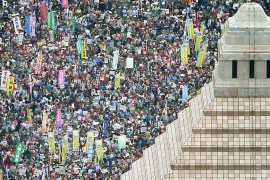