Gaza City – The hall of the Red Crescent Society building in Gaza City quickly filled up. Groups of young people sat together in rows, their loud chatter subsiding as the lights dimmed and the screen lit up with the opening scenes of Leila’s Birthday, a 2008 film by Gaza-born director Rashid Masharawi.

The sight of an active cinema hall is not common in Gaza, where all cinemas were either destroyed or permanently closed around the time of the first Intifada. Save for a couple of failed attempts to reopen them in the 1990s, the 10 cinemas that existed across the coastal territory before the Intifada have remained shut ever since.

What was once a drive-in cinema in Gaza is now a car park. Another former cinema in Khan Younis was reportedly turned into the headquarters of Gaza’s Quran and Sunna Society after the religious community argued that the cinema had shown “pornographic” films.

The fate of cinemas in Gaza closely reflects the tumultuous history of this small sliver of land. But in recent weeks, a group of young Palestinians has been trying to restore some normalcy to the lives of Gaza’s 1.8 million residents, who have lived through a decade of economic siege and three wars.

For a filmmaker in Gaza, every minute detail counts. My challenge, my message, is to stay and make films in Gaza.

Gaza Cinema, led by members of the production company Ain Media, launched about six weeks ago with a goal to revive cinema culture in the besieged enclave, where younger generations have grown up without ever setting foot inside a movie theatre.

“I’m from the generation that never experienced cinema in Gaza,” 27-year-old Hossam Salem, one of the organisers, told Al Jazeera. “People have a wider choice online, so one of the challenges is to get them to come and pay money to see a movie. I would like to see cinema culture one day become mainstream again.”

Tickets are 10 shekels ($2.50), but organisers say they can waive the fee for those who cannot afford it.

Gaza Cinema is now screening films once a week, but organisers say they intend to increase that number to two amid increasing public demand.

“We are working with films that do not breach our tradition and that carry a good message, whether it is national or social,” Salem said, noting blurbs about each film are submitted to the culture ministry for approval prior to screening. Most of the movies screened so far have been Palestinian feature films and children’s cartoons.

In the 1950s, Mozayen said, businessmen started to open cinemas. But after 1967, “religious groups started broadcasting messages against cinema”, he said.

Today, what used to be the largest of Gaza’s cinemas lies empty on a main thoroughfare in Gaza, its doors blocked by concrete slabs and its derelict facade partly concealed by trees. Despite the charred walls and debris strewn across the two-storey cinema hall, it is easy to imagine its former grandeur, with its neoclassical-style columns and high reliefs. A few blackened movie posters and an old lighting and sound machine remain inside.

Al-Nasser Cinema used to show movies every day of the week back in the 1960s, recalled 57-year-old Waseem Khazendar, who lived across the street from the cinema during his childhood. At the time, Gaza was under Egyptian occupation, and films were brought from Egypt by train.

“I’m from a modest family and could not go to the cinema often,” Khazendar told Al Jazeera, inspecting the machine that he had helped his father, an electrical engineer, fix as a child. “But I used to watch people going to the shows from my window, and I always knew what was on from the posters.”

Al-Nasser Cinema was closed after the 1967 war, only to be reopened a year later upon the request of the new occupying authorities, the Israelis.

“At that time, we could no longer bring films from Egypt; we brought films from Israel. The cinema started showing Chinese, Indian, and European films,” Khazendar said. “It was then that people began to stop going to the cinema. It became associated with the ‘bad people’.”

There are no written accounts of the history of movie theatres in Gaza. Maged Gazal, whose father co-owned the Nasser Cinema, said it closed at the end of the 1980s, during the first Intifada.

It reopened for a short time after the establishment of the Palestinian Authority (PA), as part of a short-lived governmental initiative, but was burned down in 1996 amid clashes between PA security forces and Hamas, which rejected the Oslo Accords.

Since then, Gaza has produced notable film directors, such as Rashid Masharawi and the Nasser brothers, known as Arab and Tarzan, who have pursued their careers outside of Gaza.

“For a filmmaker in Gaza, every minute detail counts,” Mozayen said. “My challenge, my message, is to stay and make films in Gaza. I work so that I can continue working, so that no one can tell me to stop.”

Mozayen last year organised the first human rights film festival in Gaza called Red Carpet. A red carpet was laid out in the middle of the Shujaiah neighbourhood, one of the most affected by the 2014 offensive. He is planning to organise the festival in another part of Gaza this year.

“Cinema should be the window that young Palestinians in Gaza view the world from,” said Rama Humeid, 30, who had attended a couple of the Gaza Cinema screenings.

“Especially because many have never had the opportunity to leave [Gaza].” 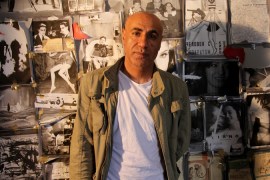 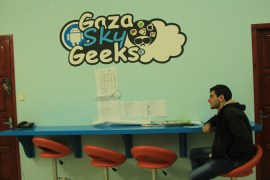