These two worlds collide in Havana, Cuba’s capital, on Friday, with the British band’s debut there. The show takes place against a backdrop of slowly improving relations between the US and Cuba, former Cold War enemies.

“What strikes me is the longevity of these guys,” Bill Janovitz, author of Rocks Off, a book about the Stones, told Al Jazeera.

“They’re well into their 70s, beyond retirement age for most people. Not only are they still out there, but they’re not taking the easy route. They’re inserting themselves into a worldwide political conversation.”

Sir Mick Jagger, the band’s raucous front man, was a schoolboy in 1953, when Fidel and Raul Castro began a rebellion that eventually deposed the Caribbean Island’s austere US-backed government and launched socialist reforms.

In 1962, when the Stones formed in London, the United States imposed a full trade embargo on Cuba and the world approached nuclear Armageddon as Moscow and Washington rowed over Soviet missiles on the island. Decades of animosity ensued.

This week’s visit of President Barack Obama continued a US-Cuba detente that began 15 months ago and has seen Washington ease restrictions by opening up flights and some trade to an island only 145km off Florida’s coast.

As Obama toured Havana, a crew of 140 Stones employees and some 80 Cubans were setting the stage at the Ciudad Deportiva de la Habana sports complex to welcome hundreds of thousands of fans to the show, called the Concert for Amity.

The gig was a late addition to the group’s Latin American tour, which kicked off last month in Santiago, Chile. Cubans dodge the $200 ticket prices paid elsewhere thanks to free entry, on a first-come, first-served basis.

The band used 61 shipping containers to import an estimated 500 tonnes of equipment, such as the stage, speakers, lights and video screens, Skjerseth said. A Boeing 747 arrived from Mexico last week carrying the last of the gear, he added.

The Stones are not strangers to the Caribbean. They recorded albums in Montserrat, Jagger is understood to own a villa in Mustique and was married to the rights campaigner and former actress Bianca Jagger, from nearby Nicaragua.

Their sound draws on many styles, from rhythm and blues to reggae and soul. Their 1964 cover version of Not Fade Away, which opens with Jagger shaking maracas, features echoes of Afro-Cuban music.

US media outlets present the gig as the first world-renowned rock act to reach an isolated nation of some one million culture-starved Cubans. For Cuba-watcher James Early, this is typical “US-centric arrogance and chauvinism”.

Cubans are erudite and world-class in music, ballet and poetry, Early said.

“I don’t mean to detract from the Rolling Stones, which will be a great attraction for Cuba, but to suggest that somehow this is opening the curtain of universal culture for them is just way beyond the pale,” Early, a former Smithsonian Institution director, told Al Jazeera.

Though human rights groups have big gripes about Cuba – from political prisoners to web blocking – the communist-run island has not sought to banish the music of foreign bands, including the Stones, since the early days of the revolution.

Former president Fidel Castro turned out to watch the Manic Street Preachers, a Welsh band, at the Teatro Karl Marx in 2001. In 1979, during a previous US-Cuba rapprochement, Kris Kristofferson and Billy Joel played the same venue.

A statue of John Lennon, the former Beatle and peacenik, was unveiled in a Havana park in 2000.

Although the Stones gig may go down in history as the biggest rock concert to be staged in Cuba, Bernardo Navarro, a 39-year-old Cuban-American, does not foresee major convulsions to life for its Spanish-speaking people.

“The Rolling Stones are rock ‘n’ roll pioneers and watching them perform will be a big experience for those at the concert,” Navarro, a project manager at the New York-based Centrefor Cuban Studies, told Al Jazeera.

“But that doesn’t mean your life will change, or that the government will shift its policies because a band is playing.”

When the Stones debuted in China in 2006, they agreed to drop Brown Sugar and other tracks from their set list, at the behest of censors. They rocked an 8,000-strong Shanghai crowd with racy, edgy lyrics, but did not foment revolt against the government in Beijing.

According to David Malvinni, author of Experiencing the Rolling Stones, the band were not the most overtly political act of the 1960s – the decade that saw such lyricists as Lennon and Bob Dylan craft anti-establishment anthems.

“The Stones are about being rebels. Challenging everything. Taking contrarian opinions and offering alternate viewpoints. That’s in the DNA of the band,” Malvinni told Al Jazeera. “I doubt they would buy into the US narrative about Cuba.”

Though not a polemicist, Jagger has occasionally penned subversive lyrics. In the late 1960s, such songs as Gimme Shelter and Street Fighting Man hinted at the Vietnam war and declared “the time is right for a palace revolution”.

After the Gulf war, the Stones released the song Highwire, about selling tanks and missiles to dodgy dictators. Another track, Sweet Neo Con, aimed at the conservative Christians who drove US foreign policy in the 2000s.

With so many years in the limelight, the band has also strayed into the political milieu.

This month, it emerged that Donald Trump, a billionaire-turned-politician running in this year’s White House race, allegedly got into a fight with Keith Richards, in which the Stones’ wild-man guitarist slammed a knife into a table, in Atlantic City in 1989.

In a memo from 1999, part of a batch of files leaked to Al Jazeera, Palestinian deal-makers were urged to heed advice from Stones lyrics in their talks with Israel. The lines cited were: “You can’t always get what you want, but if you try sometimes you might find you can get what you need.”

Next month, a showcase of art, film, design and fashion linked to the band, called Exhibitionism,  opens at London’s Saatchi Gallery.

In a video message before the show, the Stones said they were “very excited” about the “historic event” in Havana.

While considering the show’s political context, Janovitz said it is still mostly about the music. “We could be overthinking it,” he told Al Jazeera. “Maybe the Stones just wanted to play somewhere they’ve never played before. It could be as simple as that.” 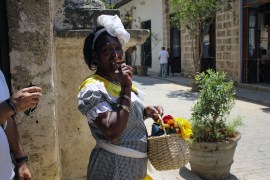 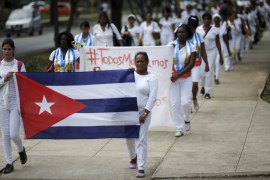 US-Cuba rapprochement and the future

The pace and timing of rapprochement has already prompted concerns about a superficial transition.