Gothenburg, Sweden  – Under floodlights on a synthetic grass pitch, teenage boys brave biting cold winds to hone their football skills – dribbling, passing, showing off fancy footwork and lining up to have a shot at goal.

From a distance, it looks like any football practice. But one thing is absent: doting parents who drop off their children for training and who will have dinner ready for them when they come back home.

The parents of the players of Sandarna Team C are thousands of miles away from Gothenburg, or, in some cases, dead. These teenagers have fled wars and hardship, arriving in Sweden on their own.

Rushing into training late but bursting with warmth and energy is Matilda Brinck-Larsen, a social worker and refugee advocate-turned-football coach.

She is welcomed with a hug by an Afghan boy who tells her not to listen to the “bad words”.

Matilda is confused at first, but soon she understands what he is talking about: a few days earlier she had published an op-ed in the local newspaper, urging Swedes to team up to help integrate unaccompanied refugee children.

This, as well as other recent media appearances in which she has spoken out in favour of a welcoming policy towards refugees, has led to a barrage of online hate and threatening anonymous phone calls.

“Don’t listen to them. We’re proud of you,” the boy tells her.

“Remember that most of the people don’t think like that,” she responds. “It’s only a small clique.”

Sweden received 35,000 unaccompanied minors last year – almost five times more than the number expected. Housing facilities for the children have been filled beyond capacity and Team C is clearly feeling the strain. Nearly 200 boys are now registered with the team, up from some 30 players when training started in 2013.

Most of them come from Afghanistan, Syria and Somalia.

For Matilda, it is a given that she should stand up for the refugee children and do all that she can to give them the best start possible in their new lives in Sweden. What if her own children ended up in a foreign country on their own, she asks herself. Of course she would want someone to take care of them.

Beyond the football pitch, Matilda is involved in organising Gothenburg’s handling of the new arrivals, including the opening of new lodging facilities for refugee children waiting to have their asylum claims processed.

READ MORE: Refugees in the Arctic

The side career as a football coach started by accident after she got involved in a summer tournament organised by the local municipality.

She was then asked by some refugee boys if she could set up a team especially for them. Initially she was sceptical. What would that do for integration, she asked. Why couldn’t they join any of Gothenburg’s 160 existing teams?

But the boys told her that was impossible, saying they felt stupid when they tried playing with “normal” teams.

“Most of these guys have played a lot of football but not organised football,” says Matilda.

“They never played with a backline, midfielders, and frontmen. So I thought setting up a team wasn’t a bad idea after all, to teach them the basics and then steer them to other clubs.”

She stops herself in the middle of a sentence, shouting to the boys who are playing a game in the drizzling rain.

“Where are the defenders?” she shouts. “Help the goalkeeper! Come on, yalla!”

When she set up the team, Matilda had no experience of coaching football. To learn, she drove to football grounds across Gothenburg to watch other teams and copy the coaching methods.

By contrast, Lisa Ek, another Swedish woman who has taken Team C under her wing, brought with her a professional football career – and the will to make a difference.

“Being a footballer is not like having a normal job. I had a lot of extra time that I wanted to use for something meaningful,” she says over the phone from Italy, explaining her decision to get involved in social projects related to the sport she loves.

After coaching Team C for a year, connecting with the players on and off the pitch, Lisa moved to Italy to pursue her career with Fiorentina. It was a sad farewell with Team C – but her involvement did not end there. A few weeks ago, 35 of the boys flew to Italy, invited by Lisa – a trip very different from the ones that brought them to Sweden.

For Jasdan Khalili, it was his second visit to Italy. Five years ago, when he was 15, he was smuggled into the country among watermelons in a truck as part of his long journey from Afghanistan.

This time he travelled by plane, with a Swedish passport, and walked proudly in the streets of Florence with his team mates.

“When I went there in 2010, I tried all the time to hide so that the police couldn’t see me,” he says. “This time it wasn’t like that. I wanted the police to catch me so that I could show them the passport I had in my pocket. But I didn’t see any police.”

Jasdan was separated from his family during the Afghan war, when he was only six years old. He was taken in by his uncle, but when he turned 12, the relative said it was time for Jasdan to support himself. He was sent to neighbouring Iran, where he, like many of his countrymen, lived and worked illegally, in constant fear of being caught by police and sent back to Afghanistan.

After some two years working in construction, Jasdan decided that he had had enough. He wanted to go back to school and build a life for himself. Inspired by other Afghans, he got in touch with smugglers, and began a perilous journey to Europe.

He had little idea of where he was going, but having watched many football games on TV, he let his favourite player guide him.

At times when he could not make himself understood, he just said “Zlatan Ibrahimovic”, the name of Sweden’s most famous football star, and he was pointed towards trucks heading in the direction of the country.

Lisa says one of the reasons why she decided to organise the team’s Italy trip was that she wanted to show the boys that the future lies in their hands.

She had the dream of becoming a pro in Italy since she was six, but she was then told she could not – because there were no professional women’s team there at the time. “Fine, I’ll play in Milan’s men’s team then,” the young Ek responded.

“It didn’t exist in my world that anything could be impossible,” she says. “That’s how I was raised: my parents told me that nothing that you really want is impossible.”

“I hope that when they saw me running around on the pitch, doing what everyone told me would be impossible, they realised that they can also achieve the goals they have.”

Being involved with Team C has made Lisa think about her own privileged childhood, growing up in a stable family environment as the daughter of a successful business owner.

Her father died five years ago, and she partly used his inheritance to finance the trip.

“It was the best thing I’ve done in my life,” she says. “They’re such good boys, they’ve worked so hard. They’ve come to every training session, solved conflicts, overcome language barriers, welcomed new team-mates. They have deserved this trip.”

Back on the football ground in Gothenburg, Matilda says Team C is about much more than just football.

In addition to the usual teenage troubles, a whole range of issues weigh on the minds of the young players. The training sessions have become a place to talk about it all – be it rejected asylum applications, bad news from home, problems at their accommodation or in school.

The gatherings have also become a forum for Matilda and the other coaches to talk to the boys about Swedish society – and, of late, about the hardening attitudes of Swedes towards immigrants in general and unaccompanied minors in particular.

The situation became especially tense after a 22-year-old employee at an asylum centre was killed in Molndal, just a few miles from the Heden sports field, which Team C uses.

Matilda says that a narrative is now spreading among many Swedes that “all those who have come here are potential murderers” – and this is an attitude that the boys, unfortunately, have to be prepared to face.

But on the football ground, the boys are given a reprieve from the challenges of settling into a new country, far away from the loved ones they left behind. For some, Jasdan says, Team C has replaced family ties that others take for granted.

As his new life takes shape, Jasdan, who now has an apartment, several part-time jobs and graduation from high school coming up this spring, has set up an organisation for unaccompanied minors to help others to make their way into Swedish society.

His advice to newcomers echoes Lisa’s talk of nothing being impossible.

“If you learn the language, if you grab the opportunities that come your way, this is the land of possibilities,” he says. “If you work hard, the future is in your hands.” 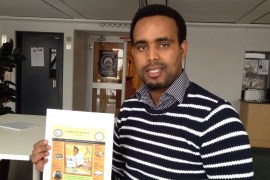 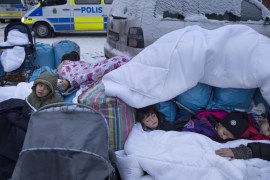 Sweden, which received most child refugees in 2015, tries to find some of Europe’s tens of thousands of missing kids. 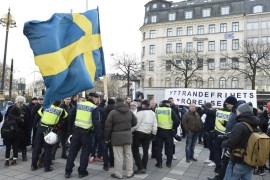