New York, United States – Under normal circumstances, the absence of both the US president and Israel’s prime minister from the annual gathering of a major pro-Israel lobby, the American Israel Public Affairs Committee, or AIPAC, would cast a pall over the event.

But 2016 is not an ordinary year. Instead of those two leaders, the spotlight turns to the leading candidates in the presidential election race: Democratic frontrunner Hillary Clinton and her most likely Republican adversary, Donald Trump.

“This year’s conference takes place amid an unpredictable and contentious US presidential election,” Jonathan Cristol, a scholar with the World Policy Institute, a New York-based think-tank, told Al Jazeera.

Thanks to her career in Congress and as secretary of state, Clinton is a known quantity. She has regularly asserted support for Israel’s security and argued for US military intervention overseas, in Afghanistan, Iraq, Syria and Libya.

Trump is more inscrutable. He departs from the Republican playbook by vowing to be a “neutral” broker between Israelis and Palestinians and expressing isolationist tendencies, including his criticism of the 2003 invasion of Iraq.

The way Trump tells it, an Israel-Palestine accord is the “toughest deal in the world” to strike and only ace negotiators, like him, should try. Even his experience in property deals might not be enough, he admitted.

After those comments, Trump was attacked by Republican rivals Ted Cruz and Marco Rubio – who has since dropped out of the race – who follow their party’s steadfast line on Israel. Later, Trump shifted gears, citing his pro-Israel record and saying that Jerusalem should be Israel’s capital.

For Cristol, Trump’s policy on Israel is all hot air. “Trump doesn’t actually know anything about the issues,” he said.

“He could promise one thing one minute and something totally different the next. You won’t find much support at AIPAC for a figure that sows racial division and is seemingly loath to deny support from white nationalists.”

The celebrity property mogul gets a mixed response from American Jews. One group of left-leaning rabbis, alarmed by his rabble-rousing nationalism and attacks on Mexicans and Muslims, will protest at the AIPAC conference, which runs in Washington from March 20-22.

But parts of the Jewish Republican establishment may be warming to Trump. Sheldon Adelson, a Las Vegas casino magnate and pro-Israel political financier, said he may be willing to back his fellow businessman. “Why not?” he reportedly said.

“The key issue is whether Donald Trump will continue advancing his idiosyncratic position,” former State Department adviser Aaron Miller told Al Jazeera. “I don’t know what Trump is going to do. We’ve never seen a candidate like him.”

AIPAC takes place during a lull in US-Israeli relations.

US President Barack Obama and Israeli Prime Minister Benjamin Netanyahu have a famously testy relationship, which has yet to recover from last year’s row over a US-led international nuclear deal with Iran.

They are still negotiating how much the US will give Israel once their current military deal, worth about $3bn a year, expires in 2018. Israel wants as much as $5bn annually; talks could drag on after Obama leaves office in January 2017.

Obama will travel to Cuba on Monday and leave Vice President Joe Biden to attend AIPAC. Netanyahu will address the crowd of scholars, congressmen and Israel-backers via satellite.

READ MORE: US election snapshot: Inside a Donald Trump rally

According to Yousef Munayyer, director of the US Campaign to End the Israeli Occupation, Trump’s rise is “awkward” for Netanyahu, who sacrificed bipartisan support for Israel by wooing Republicans and blasting Obama’s Iran deal.

“The Republican Party that Netanyahu invested so much in, cultivating a bulwark of pro-Israel sentiment in US domestic politics, has been turned on its head,” Munayyer told Al Jazeera. “He’s left with a party led by Trump and the Democrats, who he has spent the past eight years diminishing.”

Trump’s unpredictability may make Clinton a better candidate in the eyes of Israel’s leaders. According to Miller, from the Wilson Centre think-tank, the former First Lady offers smoother US-Israeli relations than Obama.

“She knows the Israelis extremely well and she’ll probably be much less willing to pick unproductive fights with Israel,” Miller said. “Hillary will be predictable. She’s a Clinton and has tremendous sensibility and sensitivity towards Israeli issues.”

READ MORE: Why women should support Sanders not Clinton

During her time in Congress and at the US State Department, Clinton has helped defend Israel at the UN Security Council, denounced the Palestinian group Hamas and argued for Israel’s use of military force in Gaza.

She does, however, criticise Israeli settlement-building on Palestinian land and supports the Iran deal that riles Netanyahu.

If elected president, she would “deepen America’s unshakeable commitment to Israel’s security” and invite Netanyahu to the White House in her “first month in office” for talks, she told a think-tank in September.

“She’ll likely get the most rousing applause of any candidate at AIPAC,” Cristol told Al Jazeera.

“Subtly, or perhaps not-so-subtly, she will imply that she will enjoy a much better relationship with Netanyahu than does Obama.”

Bernie Sanders and the Jewish establishment

Clinton’s rival for the Democratic nomination, Bernie Sanders, will not be attending the conference. The 75-year-old Jewish socialist has won fans among younger voters as well as Arab and Muslim Americans.

“He can’t be a socialist on one hand, talking about the fair treatment of all humans, and then justify Israel’s treatment and occupation of Palestinians,” Zead Ramadan, a Palestinian-American New Yorker told Al Jazeera.

Some 5,000 people, including the Pink Floyd musician Roger Waters, have signed a petition urging Sanders to shun AIPAC, which organisers have branded a gathering for “Islamophobes, anti-immigrant activists and religious extremists”.

Ted Cruz and Ohio governor John Kasich, who both seek the Republican nomination and are due to address AIPAC. They are both Israel supporters, but neither has shown that they can derail Trump’s bid for the nomination.

Malcolm Hoenlein, executive vice chairman of the Conference of Presidents of Major American Jewish Organizations, an umbrella group, says too much emphasis is placed on the animus between Obama and Netanyahu. 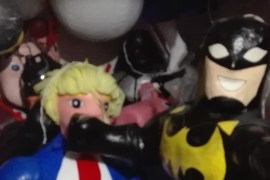 Mexicans respond to the Republican presidential candidate’s comments about them in a distinctly Mexican way.