Szeged, Hungary – When Walid set out from the besieged Gaza Strip two months ago, he never envisioned his welcome in Europe would include a jail cell and handcuffs, a courtroom and a judge.

Like many other refugees and migrants who have made it to Hungary, the 22-year-old Palestinian was arrested, charged and convicted for breaching the fence on the country’s border with Serbia.

Breaching the fence has been a crime since September 2015.

With a pair of armed guards at the door, Walid slowly walked in and sat next to his court-appointed translator on a wooden bench at the far end of the room.

With no laces in his scuffed sneakers, he was wearing the clothes he was in when apprehended several days earlier: a hoodie under an undersized  travel jacket and a pair of worn-out blue jeans.

Less than an hour later, the judge had heard all the evidence, made up his mind and declared Walid guilty of breaching the border fence. The judge said that Walid was banned from Hungary for at least one year.

“I think [Walid’s] hearing ran long today because there are journalists here,” the translator told Al Jazeera, speaking on the condition of anonymity. “It is usually much shorter.”

More disturbingly, the courts often reach a guilty verdict and issue a sentence in as few as 15 minutes, handing down harsh sentences such as one-year bans from Hungary or from the European Union’s Schengen zone.

“This is a way of building legal fences as well as the physical ones,” Nora Koves, a human rights expert at the Budapest-based Eotvos Karoly Policy Institute, told Al Jazeera.

“The law itself violates the Hungarian constitution and European Union law,” she said.

Andras Kovats, director of the Hungarian Association for Migrants, says that the legal process is “very problematic from a legal and constitutional point of view”.

“On the one hand, these courts are very formal, quick and superficial processes,” he told Al Jazeera.

However, on the other hand, Kovats points out that the courts have yet to sentence anyone to prison for breaching the fences, although the September 2015 legislation allows imprisonment for the offence. “It is a kind of trade off.”

Sitting in the waiting room outside the courtroom, five others who say they want to apply for asylum in Europe – Moroccans, Tunisians and Algerians – await their turn.

Walid, who was raised in Gaza’s al-Shati camp, waited more than two years before he was allowed through the Rafah crossing into Egypt. From there, he flew to Turkey and hired a smuggler.

“The boat was very dangerous,” he told Al Jazeera, referring to his dinghy journey with dozens of others across the Aegean to the Greek islands. “We died a thousand times before we saw land.”

With the help of smugglers and fellow refugees, he made it all the way to Hungary until he was caught by police. After breaching Hungary’s fence on the Serbian border, he and four others were arrested and put in a detention centre on March 7.

“I’m sorry you cannot photograph me, but I don’t want my parents to see me in handcuffs,” Walid said, also asking that Al Jazeera withhold his surname. “It’s the first time I’ve ever been arrested.”

Since December 2008, Israel has launched three military offensives in the besieged coastal enclave.

The most recent Gaza war ended in late August 2014 after 51 days of fighting. According to the UN Office for the Coordination of Humanitarian Affairs, Israeli forces killed more than 2,200 Palestinians, mostly civilians, while Palestinian armed groups killed 72 Israelis, six of whom were civilians.

“Then the siege and the fighting between the Palestinian factions. There isn’t safety and there’s no future,” he said. “You live death every day [in Gaza]. Normal people – we are the ones who pay the price.”

On Wednesday, Hungary announced a nationwide “state of emergency” following the closure of the Croatian and Slovenian borders to anyone who does not have a valid European Union visa.

The interior ministry said an additional 1,500 troops and police officers will be deployed to the country’s 175-kilometre fence on the Serbian border.

Despite these measures, refugees and migrants have continued to make it to Hungary. During the first two weeks of March, at least 1,428 were arrested for breaching the fence, according to the Hungarian police.

The number of refugees and migrants in open camps and closed detention centres tripled in recent weeks, according to the rights group.

Laszlo Toroczkai, the mayor of Asotthalom, a Hungarian village on the Serbian border, argued that Hungary should not accept asylum seekers.

A hardline rightist and founder of the ultra-nationalist 64 Counties Youth Movement, Toroczkai was also one of the first advocates for a fence on the Serbian border when he started promoting the idea last summer as hundreds of thousands of refugees and migrants passed through the country.

“Do we have to accept everyone whose standard of living is worse than an average European Union citizen’s? Maybe it’s one billion people,” he told Al Jazeera.

Yet, Erno Simon, a senior communications officer at the United Nations refugee agency, UNHCR, in Central Europe, insists that asylum seekers should not be punished for entering the country in an “irregular” manner.

Back in the Szeged court, Walid sat across from the armed guards in the waiting room after his guilty verdict was announced.  He explained that he still hopes to make it to Germany or Sweden.

“Palestinians are already refugees. We have been occupied for almost 70 years. Now I am a refugee for a second time.” 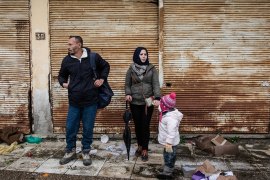 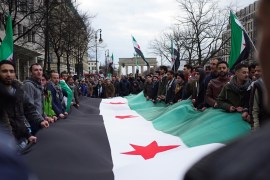 Crowd gathered under Brandenburg Gate in Berlin called for removal of Syrian president. 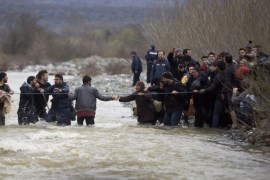