Morelia, Michoacan – “The third time I almost died was because of a speedball. I’d made a lot of money on a sale and I blew it up in my veins: coke into this arm; heroin into the other,” said Oliver Cortes Sanchez, 21, slapping first his left forearm, then his right.

His skin is pinholed with scar tissue and seamed with pale track marks. “I was surprised to wake up. The friend I was with didn’t abandon me. I’m not sure I’d have done the same. I lived among wolves back then.”

Oliver makes unflinching eye contact when he talks, all cagey sincerity. His fellow residents at the CeVIDA recovery centre outside Morelia – the capital of Mexico’s troubled western state of Michoacan – were playing a lively game of football on a dirt pitch, but the noise didn’t distract him. He and the other eight builders are all young recovering addicts or ex-gang members, working to complete CeVIDA’s new rehab centre.

CeVIDA’s two centres currently house 60 men and 14 women, but their capacity is stretched by an influx of child addicts as young as four years old. The new site, complete with an organic bakery, Pan de Vida, which sells its products to restaurants in Morelia – is intended to be a self-sufficient farm surrounded by a green wall. Sheep already crop grass on the site’s two hectares, while a cluster of plastic-clad greenhouses gleams under the mellow evening light.

‘One madman finds another’

Since 2007, the organisation – funded by the publicity-shy organic foods impresario Ruben Perez and a Mexican government programme – has helped young people get their lives back on track, with an approach that weaves addiction therapy, psychiatry, skills training, and peer counselling into a strong safety net to allows in-patients to go back into the world without fear of returning to addiction or gang activity.

“I’m not ready yet,” said Oliver. There’s a shiver always audible in his voice, as if he’s straining to keep it together. “I can’t go back out into the world until I’ve got something to do there. It’s like that saying, ‘One madman finds another’.”

He batted away a mosquito crawling on the “Hecho en Mexico” tattoo on his calf. “For now, I’m doing a lot of introspection. I’m learning who this new, sober Oliver is, so I don’t have ambitions. The first year sober, you feel the void you’ve been filling with consumption. But I was a brilliant student, even while an addict, and I was a great dealer – punctual, respectful to the clients, good product. Imagine what I can do living honestly.”

It took a fourth brush with death for Oliver to get clean. After spending a week in a coma brought on by another near-fatal overdose – his third – he remembered that a friend had spent some time at CeVIDA. Although that friend had died of an overdose after escaping from the centre, Oliver was determined not to slip up this time.

“I couldn’t go back to dealing,” he explained. “The second time I almost died was when the Knights Templar kidnapped me for selling crystal and heroin in the tourist centre of Morelia – their territory. I was 17. They jumped on me at 3am on a Saturday night, beat me, put a hood on me, took me to a safe house in the middle of nowhere and tortured me for a week. Whipped my back with cable, [gave me electric shocks] by putting my feet in water and passing a current through. When they let me loose, I knew I was finished as a dealer.”

Two weeks ago, Pope Francis led a youth pep rally in Morelia, Michoacan’s state capital, with the poignant remark that “Jesus would never ask us to be hit men”.

The comment struck a chord in the state where Mexico’s war on drugs began in 2006, with President Felipe Calderon’s decision to mobilise the Mexican army in a crackdown on Michoacan’s wealthy, brutal cartels.

That decision created a lost generation of young men in Michoacan. Violence led to the state tanking, forcing three million Michoacanos to live abroad, mostly in California. Those who stay can choose between earning around $175 per month in uncertain, gruelling work as a day labourer – or tripling that income working as a halcon [lookout] or sicario [hitman] for the local gangs.

As a young, unskilled school leaver from a broken home, Oliver fell right into the trap. Mexico has a word for him and the other four million Mexicans between 15 and 24 who form part of one of the country’s most stigmatised demographics: the nini, from the Spanish expression “ni trabajan ni estudian” (they neither work nor study).

The World Bank’s report, Out of School and Out of Work, published last month, found that opinion articles on the nini phenomenon routinely use words like “lazy”, “drugs” and “violence”, attesting to a stigma that Dr Eunice Rendon, the director of the Mexican government’s Commission for Social Prevention of Violence and Crime, has worked for more than a decade to erase.

As well as funding of CeVIDA and other projects – such as a fruit farm run by young widows of drug violence in the flashpoint town of Apatzingan, in the state’s Tierra Caliente – research forms a central part of her organisation’s work.

“If we ignore the nini’s social context, we reproduce the stigma,” she explained. “We can’t just police away Mexico’s problems. We have to attack the social causes.”

The commission’s 2014 study of almost 17,000 young people charged with crimes ranging from armed robbery to contract killings on behalf of organised crime presented a clear picture of Mexico’s most at-risk demographic: young male school dropouts from dysfunctional families, who are either regular consumers of drugs or live with full-blown addictions.

“The absence of an authority figure is the central issue,” explained Rendon. “Many so-called ninis leave school to help provide for their families, and won’t have any problems. But almost two-thirds of the young people we interviewed came from divorced families, meaning they were less likely to be close to a strong male role model.”

For Victor Sandoval Escalante, 22, that absence shaped his life.

“My father’s a detective, and a good one, too – 16 years on the job and he hasn’t been killed!” he laughed.

“But because he works hard, he was never home when I was young, long before he and my mother separated. Kids imitate what they see, not what they hear – and all I saw was gangs. I robbed, I got younger kids into drugs. I myself took enough drugs to do me for a lifetime – you name it, I’ve had it. I only got clean in the Cefereso,” he said, using the Spanish acronym for Mexico’s maximum-security prisons, where he spent “the longest seven months of his life” for drug possession and resisting arrest.

‘Our problem is bigger than substances’

After leaving prison a year and a half ago, he joined CeVIDA and restarted his high school education. “I want to be an addiction counsellor and psychologist,” he told Al Jazeera. “If I’m strong enough to get kids into drugs, I can get them out of it. The fact that I’ve been where they are means I’m confident they’ll listen to me.”

Tall, smiley and painstakingly polite, with a shaven-headed look he has adopted to hide meth-related hair loss, Victor talked freely about his addictions and jail time in front of his mother, Angelica Escalante, CeVIDA’s human resources manager, and his two younger siblings. On the car ride from the building site to the foundation’s existing centres, Victor leaned all the way back in his seat, one hand on the gearstick, the other on the wheel.

“The way I drive is the only trace of the old Victor,” he laughed again. “You wouldn’t have liked me before. I was very closed, very hard. My family was scared of me.”

There’s no trace of this fact, either. From the back seat, his mother and two younger siblings commented on Victor’s retelling of his life story, talking about how he made them feel, how scared they were, how good it is that he’s back from the brink.

“This is one of the ironies of addiction,” explained Victor, parking outside CeVIDA’s men’s complex. “The pain tests your love for each other, and ultimately brings you closer together.”

Victor led the way inside CeVIDA’s auditorium, where a group of male teenagers in cinema-style seating took it in turns to give their peer counsellor, Beto, comments on a video of Argentine recovery pastor Chris Perez.

“Our problem is bigger than substances,” said one teenager, aged about 15, in a slow, measured voice. “It’s about giving in to mediocrity,” he went on. His classmates didn’t snigger or interrupt: they listened, rapt, and waited for their turn to speak.

“This is the other irony of addiction,” said Victor, as we left the auditorium. “We addicts have noble hearts, deep down. The only people I met in my Narcotics Anonymous meetings were highly successful. Recovery is just about discovering this.” 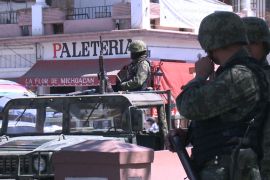 Residents in Michoacan tell tales of violence, extortion and oppression, but with a glimmer of hope for the future. 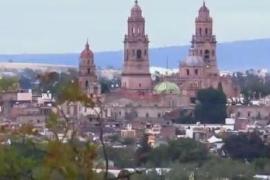 Mexico shows off other side of Michoacan

Known for its art, culture and food, Morelia aims to shed being pigeon-holed as just the capital of a violent state.