Korinth, Greece – Yiorgos Saraptsis prunes his hectare of kiwi vines diligently, making sure that each plant has just a few long tributaries into which to channel its strength when spring comes. He explains how most of the buds will have to be plucked before they fruit, so that the remaining kiwis reach market size.

It is labour-intensive work, but since Saraptsis owns less than a hectare in the shadow of Mount Olympus in northern Greece, he is happy to do it himself, bringing his unemployed son to help at harvest time. Even so, he says, new taxes and social security contributions that the government plans to enforce will make even this low-overhead concern non-viable.

“Those who have up to two hectares are finished,” he says. “You have to be a big landholder to survive. I made $11,000 from my hectare last year. My income tax and costs claimed half of that. If I didn’t work the land myself I’d pay even more for labour. So what’s left?”

For Saraptsis, the issue is not one of survival. His second son is a manager in a large supermarket chain, and he himself has a pension he can live off.

But for many farmers across Greece, the issue is existential. For 10 days they have blockaded highways with their tractors in a bid to draw attention to it, and they are threatening to march on Athens.

Athenians are mostly dismissive. They point to the fact that farmers were once a pampered constituency. Two decades ago they paid no social security, and until two years ago their tax was only six percent. But if austerity came late, it came swiftly.

Farmers’ income tax doubled two years ago to 13 percent. When Syriza was elected last year, it promised to relieve them of a crisis-era property tax. Instead, it doubled their income tax again, and eliminated their diesel subsidy. It also raised sales tax on seeds, livestock feeds and pesticides from 13 to 23 percent. All this increased the capital farmers need to set aside to stay in business.

The reason for this debacle was that after locking horns with its creditors in the eurozone for six months, Syriza capitulated to punitive terms for a third, $93bn bailout loan. Among other things, it agreed to cut social security spending by almost $2bn a year – one percent of GDP.

This was the spark that set the tinder alight. Farmers currently pay a flat annual fee of between $780 and $1,300 a year to the Agricultural Insurance Organisation. The government now says that they should pay 27 percent of their income, which amounts to thousands of dollars even for the poorest farmer

“The government is asking us to pay 26 percent income tax, plus all of next year’s taxes up-front. It’s tripling our social security contributions and keeping the property tax it was going to abolish … this is a struggle for survival,” says Rizos Maroudas, the head of the Larissa farmers’ union in central Greece. “We’ll end up on the dole, or as serfs on our own land.”

Desperation creates strange bedfellows, and the proposed social security reform has now brought farmers closer to urban professionals, who are threatened with similar measures. Both plan to demonstrate in a general strike the civil service has called for Thursday.

If it ain’t broke, don’t fix it

Greek agriculture is worth about $7.2bn, or 3.8 percent of the economy. That alone makes it socially and politically important, because it employs an estimated 700,000 people full time; but it is a strategically important piece of the economy, because most of its value – $5.2bn – came in export revenue last year, accounting for a fifth of all foreign income, according to the Panhellenic Exporters’ Association. That capital is key to paying Greece’s onerous debt, because the only way to export capital is to import it.

Moreover, agriculture has proved surprisingly resilient. In the face of last year’s global slowdown, Greek exports fell by 21 percent. Agricultural exports fell by only 6 percent. However, farmers now fear that the government’s measures will undermine their competitiveness.

At the very least, they want more of their expenses deducted from taxable income. “If the government wants to see me as a business, then I should have the benefits as well as the disadvantages of that,” says Dimitris Dimitriadis, the head of the eastern Mani farmers’ union in the Peloponnese. “For instance, if I invest in a tractor, the government allows me to offset 10 percent of that cost per year for five years …. So it recognises only half the expense.”

He points out that the government subsidises new jobs in other industries for six months. “If all this applies to businesses, why doesn’t it apply to me?”

The government counters that it will spend more than $11bn in European Union subsidies on farmers over a seven-year period, but farmers like Dimitriadis believe that policy adheres to an outdated model of spoon-feeding.

“Last year I got 1,100 euros [$1,200] in subsidies,” says Konstantinos Panayotopoulos, who grows raisins and olives on 10 hectares in Korinth. “I need to invest 70,000 [euros] in next year’s crop. Who cares if we’re in Europe? I don’t care for subsidies. Do they want us to produce? Then leave us alone.”

Panayotopoulos is in his 70s, and an example of the fact that Greek farmers rarely retire. This explains why they are unimpressed by the government’s argument that their pension will rise from about $400 to about $500 under the new regime.

Agriculture minister Vangelis Apostolou, the agriculture minister, has dismissed any notion of withdrawing the social security reform. “That’s like asking us to blow our agreement with creditors sky high, and put our country back in danger of leaving the eurozone – even the European Union,” he said on January 24.

At issue, he says, is the fact that the government will spend as much as $3.7bn topping up the Agricultural Insurance Organisation, or OGA, this year.

“Eighty percent of the money [contributed by the state to OGA] goes to people who are not farmers,” counters Dimitriadis. “The Roma are paid out of OGA, so are people with family benefits and so are paraplegics and returnees from the diaspora. If OGA has a million enrolments, only 400,000 are truly farmers.”

Many farmers are afraid that the new policies, unless drastically revised, will lead them off the land.

“Much of the economy depends on agriculture and it will suffer. You can already see the effects in the shops and businesses of Larissa,” says Yiorgos Roustas, a journalist who covers agriculture in the plain of Thessaly, Greece’s breadbasket.

“But the main effect is that small landholders won’t survive. Most of the farmers at roadblocks are in this group. They’re the ones who supplement their farming income with income from another profession. They will have to quit and sell their farms for a song,” he says.

The Greek state’s economy has been ruled by small and medium-sized enterprises for all of its 200-year history. It is they who still generate 90 percent of employment. Austerity struck the urban economy first, and shuttered a quarter of a million businesses – a third of the total. Millions more are thought to be moribund. It may now have the same effect on the rural economy.

Asked whether he is worried that his two sons will sell the kiwi farm, Yiorgos Saraptsis, shrugs. “For as long as I am alive, I will work it,” he says. “After that, they can do what they like.” 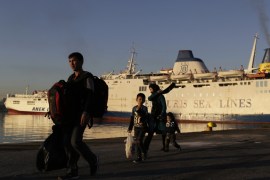 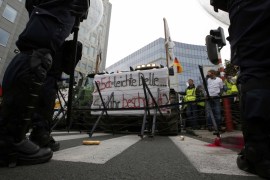 EU intervention comes after thousands of farmers took to the streets of Brussels over slumping milk and meat prices.