The “First in the South” primary, set to take place on Saturday in the US state of South Carolina, is one that the Hillary Clinton campaign has been waiting for.

The Democratic presidential hopeful has seen her campaign challenged in recent weeks by a surge of support for her main rival, Bernie Sanders.

In recent days, the Clinton campaign has been sending emails, including to this reporter, highlighting how she is being “outspent” by Sanders, and urging her supporters to donate more to her political campaign to become the nation’s first female president.

Given this challenge, Clinton has been looking to South Carolina as a place where she might have an edge.

That’s because half of the voters in this primary are African American, and, traditionally, Clinton scores highly when it comes to black voter support. Pundits in Washington and on national television in the US repeatedly refer to the black voters here as Clinton’s “firewall”, ready to stop the Sanders’ surge.

The problem for Clinton is that not all African American voters in South Carolina are listening to the “know-it-all” commentators on their televisions. In fact, not surprisingly, I have discovered they resent the Washington-based pundits and find the gross generalisations and assumptions about how black Americans will vote irritating – and even offensive.

At a meeting organised by black women to speak about politics, business and faith for black women, Democratic party “super delegate” – and South Carolina state representative Gilda Cobb-Hunter – told me the television talking-heads “all repeat the same narrative, whether it’s visual, print, radio”.

Cobb-Hunter added: “We are just like any other community. We don’t think alike, look alike. We have very different views of what’s important to us.”

This is especially true among younger African American voters. Many say openly that they distrust Clinton, especially after it was revealed this week that – when speaking publicly in 1996 about at-risk black youth who may have committed crimes – Clinton referenced the young people as “super predators”.

It’s a statement many here say has caused them to pause and reconsider whether Clinton’s promises to end mass incarceration, which disproportionately affects low-income Americans and communities of colour, are genuine.

They question whether Clinton will continue what they see as progress by the Obama administration to eradicate racial injustice.

At a campaign stop this week, one young black voter interrupted a Clinton fundraiser to demand an apology from the former secretary-of-state. She was ushered out of the event and heckled for being inappropriate.

Clinton later issued a statement saying: “I shouldn’t have used those words.”

Still, many young voters in this state say they’re now taking a closer look at Sanders, who says that, for decades, he has championed civil rights, even being arrested in 1963 in Chicago for his efforts.

“Most in our community are on the side of breaking with the establishment way of doing things and putting the power back in the hands of the people,” magazine publisher and entrepreneur Wendy Brawley said.

Brawley added when she casts her ballot in South Carolina’s primary on Saturday, she will vote for Sanders.

At a campaign stop in South Carolina this week, Clinton told supporters if elected president, she would bring American voters of all walks “together to solve our problems”.

“It’s about putting forth real solutions that will make a difference in peoples lives. It’s about setting big goals for our country. We have work to do, but we must do it together,” she said.

Clinton’s message resonates with older African-American voters such as disabled veteran Rosemounda Peggy Butler, who feels it is time for a woman in the White House.

“It’s time for a woman to hit the glass ceiling, okay. If anybody can do that, Secretary Clinton can do that.”

But first Clinton must win the Democratic party’s nomination by defeating Sanders. She must work for every win, shaking hands, making speeches, and earning the trust of each voter, something she has been working hard at this week in South Carolina.

In the last presidential election, African-American women voted at a higher rate than any other group. It’s support Clinton knows may be critical to win, not just South Carolina, but the White House. 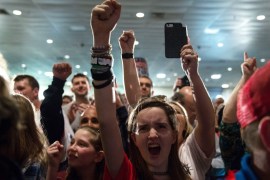 Has Trump’s South Carolina win cast a shadow over attempts to portray the state as a beacon of the “new South”? 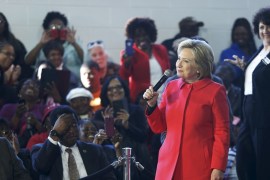 How important are the South Carolina primaries?

We look at what the state means for Republicans and Democrats and ask what matters to South Carolina’s voters.