Boats of refugees have been coming to Skala Sikamineas, a village on the coast of Lesbos that was originally founded by those fleeing the 1919-1922 Greco-Turkish war, for almost two decades.

The secluded village of fewer than 200 people is a gateway to Europe that has brought joy, but also grief as death blights the waters around this Greek island.

The fishermen and other residents of the village have been saving their passengers for that long too.  But these days the numbers are hard to cope with. A few years ago a boat arrived every week, carrying mostly refugees from Afghanistan. Now 40 boats packed with Iraqis, Syrians, Somalis, Afghans and other nationalities can come in a single day.

The sea has always been integral to Skala Sikamineas. It provides its residents with food and an income, attracting the tourists who come to enjoy a day spent walking its beaches and tasting the local ouzo. But it is so much more than that. The vast, unknown expanse is the stuff of faith and legend; a subject of fascination and fear.

The tales of Jonah’s encounter with the whale and of Moses’ parting of the Red Sea appear in Christianity, Islam, and Judaism. In Greek mythology, Poseidon, the god of the sea, could create calm waters and new bountiful islands. But he could also strike the earth with his trident and create death and destruction in the ocean at will.

Now, an equally epic battle is playing out on these seas.

Yet, this village leads a somewhat double life. On the calmer days, when fewer boats come in, it seems sleepy – the sort of place where “good morning” – kalimera in Greek – is used as a greeting until late afternoon.

A lone white goose, a village mascot of sorts, waddles back and forth around the harbour. It is chased into the sea every morning for a daily bath by a local who appears to own the bird.

At a seaside cafe, the owner, Tula Koutalleli, jokes and tends to the customers. Some are older local men who briefly make conversation before returning their attention to the fishing boats that bob in the harbour. But many are humanitarian workers and volunteers, and the cafe often doubles up as a clinic for newly arrived refugees in urgent need of medical care.

The Reverend Father Christoforos Schuff meanders between the tables, stopping to chat with each group individually – either in Greek, English, Danish, Norwegian, Swedish or one of the other four languages he speaks.

He is a striking figure, dressed from head to toe in black, a small wooden cross at his neck, his long blond hair hanging loose. 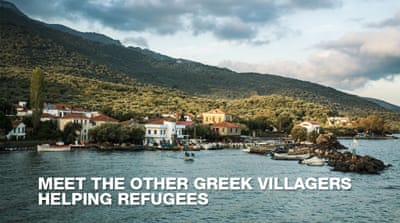 Born in the US but with links to Scandinavia, Schuff has lived in and around the village for 14 years. He has a serene aura about him and helps to co-ordinate the different organisations and lone volunteers into a system that just about works, despite the clear lack of any sizeable NGOs and any significant funding here.

Schuff, who works closely with the newly created Swedish NGO Lighthouse Refugee Relief organisation, can frequently be found on the beaches or in the makeshift refugee camps created and run by the small NGO that flank the village.

He has been known to give out pieces of carpet so that Muslim refugees have something on which to pray when they arrive ashore. “We all have the same God,” he says.

“Because I’m a religious figure, perhaps they feel safe,” Schuff adds, mulling over the thought. “I think there should be 100 priests down here. All the monasteries here on the island that have empty rooms and beds. They should be open too – but they’re not.”

When Schuff speaks, it is as though he is moving his thoughts from his head and out into the air. “All my brothers should be here,” he says, his enthusiasm for the cause weighted by disappointment. “I believe in a God of love. If we don’t show love to our fellow man, we are not showing love to God. They go hand in hand.”

A few minutes later, Schuff gets up to leave. He is off to pick up debris from the beach. After that, he will help to distribute water to the refugees. Then he will drive families that have just survived the trek across the Aegean to designated camps so that they do not have to walk the several kilometres, wet and cold, up Mt Lepetimnos.

“You know, someone asked me why I came here 14 years ago,” Schuff says, almost as a passing comment, “and I said to them: ‘To be here now’.”