In stark contrast to Issyk-Kul’s natural beauty is the massive Kumtor gold mine to the lake’s south, at an elevation of more than 4,000 metres. Kumtor, which has been operating for nearly two decades, is the largest open-pit mining operation in Central Asia, and the only one operating on an active glacier.

The mine, owned by Toronto-based Centerra Gold, claims to provide 2,800 jobs and produces almost 8 percent of Kyrgyzstan’s gross domestic product. In a good year, Kumtor produces up to 18 tonnes of gold.

But it has also been a flashpoint for unrest. Villagers living near the mine complain about what they describe as an unfair deal with Centerra Gold, an uneven distribution of wealth, high unemployment in surrounding communities, lack of healthcare, the loss of traditional pasture and the destruction of the glaciers at Kumtor.

This negative sentiment exploded in 2013, when mass protests led to violence and a temporary shutdown of the mine after protesters briefly occupied a power station that supplies it with electricity. The Kyrgyz government responded by arresting and imprisoning local activists, who claimed to have been beaten and tortured at the hands of the state security services, according to Bakyt Amanbayev, a former ombudsman of the Kyrgyz Republic.

Five community organisers who participated in the 2013 protests remain in prison, convicted variously of disturbing the peace, extortion, and the taking of hostages – charges they deny.

Five more were taken to court in October 2015. Although their cases have been in court for four months now, their defence lawyer, Chinara Dzhakupbekova, recently told Al Jazeera that prosecutors have yet to formulate charges against them, and that she could not comment further on the case. The most recent hearing took place in January.

Activists say these legal proceedings are part of the crackdown by Kyrgyz authorities on public dissent against the mining project.

In December 2015, Al Jazeera reported that the Kyrgyz state security service was pressuring relatives of imprisoned activists to silence remaining opposition in the villages.

The Kumtor mine has long been a target of criticism. In 1998, after a mining truck carrying cyanide crashed, nearly two tonnes of the deadly chemical spilled into a nearby river that was a main source of drinking water for villages downstream. In the immediate aftermath of the cyanide spill, 2,600 villagers were treated and more than 1,000 admitted to hospital.

Centerra Gold has also been accused of bribing corrupt officials in Kyrgyzstan during the first restructuring of the Kumtor project in 2002-03, charges the mining company repeatedly denied. These allegations exacerbated existing tensions in the district of Jety Oguz, where the mine is located.

One member of the anti-mining protest movement, a native of Jety Oguz who requested that his name was not used in fear of government reprisals, told Al Jazeera: “If not for these negative effects [environmental impact in the settlements], we wouldn’t have known about how Kumtor mine is changing livelihoods in the district.”

The activist added that, after receiving an unsatisfactory response from local authorities about health and environmental problems related to the mine, “communities have decided to deal directly with ministers, the prime minister – and if they can’t fix these issues, then with the president [of Kyrgyzstan]”.

Over the course of the past decade, anti-mine activists have said that those living near Kumtor became wary of the mine’s negative effect on the environment, and that dust from the mine is causing health problems in the district.

‘Aware of the complaints’

For his part, John Pearson, the vice president of investor relations at Centerra Gold, told Al Jazeera by email that the company was in communication with local villagers, and that it has a “specific stakeholder engagement and communication plan in this regard”,  as well as a way for them to file grievances.

“Centerra is aware of the complaints that have been made around the response of the Kyrgyz authorities to the protests in 2013,” said Pearson. “Our only knowledge of this situation is based on information we have seen and read in the local and international press.”

He added that the Kumtor project “has been contributing 1 percent of its gross revenue to the Issyk-Kul Region Development Fund. Since these payments commenced in 2009, a total of $46 million as of the end of September 2015 has been contributed.”

Kyrgyzaltyn, a state-owned company that jointly manages the Kumtor mine, did not respond to Al Jazeera’s request for comment.

Meanwhile, the Kyrgyz government has been wary of human rights organisations that have tried to research the situation at Kumtor.

In October 2015, a delegation of European observers from Bankwatch and Front Line Defenders made a fact-finding trip to villages near the gold mine, and met hostility and obstruction from the Kyrgyz state security service, according to a Bankwatch briefing (PDF) published after the trip.

Front Line Defenders, a Dublin-based human rights organisation, said that “the local state security forces were keen to prevent this delegation from meeting community leaders and organisers who were trying to compel greater environmental oversight and control over the Kumtor mine”.

Aziza Abdurasulova, the head of Kylym Shamy, a human rights NGO based in Bishkek, claimed that the Kyrgyz government had ignored community grievances against the mine for more than a decade – and that, given the unresolved public concerns, the protests against Kumtor were likely to continue. 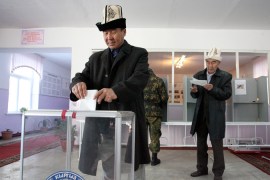 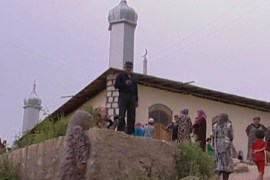