Lindsey Graham wanted to be president.

The problem was, he didn’t have the support.

In an election year, when security is nearly top of the list of people’s concerns, he could not make the breakthrough.

He appeared in several Republican debates – but always on the “undercard” – the gathering of those doing badly in the polls. He had strong moments. He drew praise from pundits and politicians alike.

But eventually he had to bow to the inevitable. With no visible support, there were no big donors racing to join the cause. And so he dropped out. He went to the debate in Greenville on Saturday. As a spectator.

When he dropped out of the race, he threw his support behind former Florida governor Jeb Bush. And now he works as a surrogate, a person who will talk up Bush’s performance.

But what comes over clearly in any interview and any conversation is how much the senator dislikes Donald Trump.

READ MORE: Why the debates in the US presidential race matter

He has already told the billionaire businessman to “go to hell” and get out of his party.

The softly spoken South Carolinian is now spending his days going from event to event, contacting supporters and doing what he can to put votes in play for his chosen candidate.

Graham insists people will eventually see through Trump, that he will be rejected at the polls.

But as a loyal Republican, he has said he would support whoever won the nomination and was the party’s candidate for president.

That would mean, at that time, he was prepared to give his support to someone he described as a “race baiting, xenophobic bigot”.

Trump has now gone too far. But it wasn’t in comments about Mexicans, or women or the disabled. It wasn’t his plan to temporarily ban all Muslims from the US.

It wasn’t even the many things that Trump has said during the campaign, with which the fact-checkers have found fault.

It was his comments in the debate last Saturday where he described the last Republican president, George W Bush, as a “liar”.

He accused Bush of taking the US to war in Iraq when he knew that Saddam Hussein did not have weapons of mass destruction.

And he reminded the millions watching that Bush was in the White House when the 9/11 attacks took place.

This, Graham said, is someone embracing “nutjob views…something that really only comes from the kook part of America”.

It’s something many Democrats have said over the years. And now Graham insists that if Trump wins the nomination, he will reconsider if he can give him his support. Not that he won’t, just that he’ll reconsider.

The establishment of the Republican Party would love to see Trump fall. They believed his campaign would implode within weeks.

They quietly smiled after every outburst – from calling former presidential nominee John McCain a “loser” to his branding of Iowa voters as “idiots” when his poll numbers fell.

They reasoned that other presidential candidates have disappeared for fewer misdemeanours and Trump would be no different.

There was, at best, muted criticism of his more outrageous statements.

The party saw he was attracting new voters, that he articulated the anger of many at the current political system. And the Republicans didn’t want to chase them away.

Trump kept getting stronger. He refused to apologise, refused to back down and hammered his message even harder.  He didn’t care if some people didn’t like it.  His poll numbers kept going up.

The latest figures from South Carolina, the next state in the nominating contest which votes on Saturday, gives him a significant lead over every other candidate.

This is a deeply conservative state and Trump has challenged many of the Republican Party’s orthodoxies.

If he wins there – with its diverse electorate, which is bigger than Iowa and New Hampshire combined, there is no reason to think he cannot win in any other state.

Many people believed the presidential run would change Trump.

The Republican establishment is wondering if it got that right. 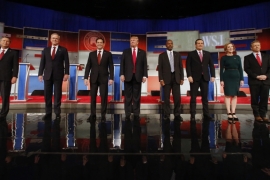 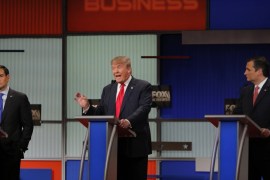