New Delhi, India – In 2005, more than 5,000 students at Jawaharlal Nehru University (JNU) surprised the visiting Venezuelan president, Hugo Chavez, when they broke into a rendition of the Chilean socialist anthem, “El pueblo unido jamas sera vencido”, which translates as “The people united shall never be defeated”.

Delightfully surprised, Chavez raised his fist and joined the students in chorus.

Three years later, thousands of students here also took to the JNU grounds to celebrate the victory of Barack Obama in the U.S. presidential election – not because the campus, which is vociferous in its attacks on capitalism, had suddenly warmed to a Democratic Party victory, but because the world’s most powerful country had finally elected its first black president.

This is JNU, a university established in 1966, named after India’s first prime minister, Jawaharlal Nehru, whose students have a reputation of being among India’s most politically conscious.

But now the campus is at the centre of a storm.

Students there are facing a crackdown by the Indian government after some participants at a meeting within the campus allegedly raised slogans against the Indian state, including pro-freedom chants for the state of Kashmir.

This occurred at at an event organised on February 9 against the hanging of Afzal Guru, a Kashmiri-born man who was found guilty by the Indian judiciary of being involved in the 2001 attack on the Indian parliament that killed 14 people, including five attackers.

Rajnath Singh, India’s home minister, said on Sunday that the protests were backed by “terrorists”.

“If anyone shouts anti-India slogans and challenges the nation’s sovereignty and integrity while living in India, they will not be tolerated or spared. Whatever has happened in JNU is extremely unfortunate. I have instructed Delhi CP [commissioner of police] to take strong action against the anti-India elements,” said Singh.

Following the meeting, the Delhi police detained seven students on sedition charges, including Kanhaiya Kumar, the president of the students’ union, who has been placed under a three-day custody.

Just before his arrest on Friday, Kumar had said he believed in the Indian constitution but pledged to fight what he called “fascist” forces, a widely circulated video of his speech at the administrative building of JNU showed.

The left-dominated student body has been accused by the ABVP, the student wing of the ruling BJP party, of fanning “anti-national” sentiment.

The student body has denied the allegations.

Since the arrest of the JNU student leader, the university campus has become a veritable fortress, with a stream of prominent political leaders, including Rahul Gandhi, vice president of the Congress Party and Sitaram Yechury, general secretary of the Communist Party of India, coming here to be a part of the students’ protest.

The university, which has a long tradition in “the art of protest”, saw professors forming a human chain on Saturday evening to prevent any clashes between two distinct groups: the thousands who gathered to listen to these leaders and the scores who waved black flags and protested against the visits.

The students’ union has now called for an indefinite shutdown beginning on Monday.

On Sunday, angry students shouted slogans such as “media go back” at a mass meeting called by the teachers’ association, JNUTA.

On social media, JNU students, professors and alumni reacted to the unfolding events with mixed emotions.

The references to the “negative media portrayal” of the institute were also echoed in the JNUTA statement.

“The arrest of the JNUSU president and its purported endorsement by the university administration, coupled with a largely negative reporting in the media, has created an unprecedented situation that requires our immediate response. Forced away from their normal academic activities, JNU students are out on the streets. The autonomy of the university stands surrendered,” the statement said.

Even as some commentators ask for the university to be closed down, Rakesh Batabyal, author of the book JNU: the Making of a University, says the institution is indispensable.

“India needs JNU,” said Batabyal. “It provides the space for the debate that might not be possible elsewhere.”

The struggle is likely to continue. 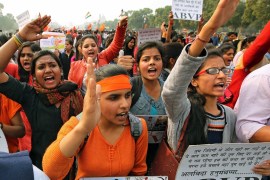 Crackdown on dissent cited in detention of New Delhi student for his alleged role in “anti-India” protests.