Glasgow, United Kingdom – He is the bombastic UK politician who realised his long-held dream of a British exit from the European Union, and who remains a thorn in the side of the nation’s political establishment.

Nigel Farage, the former leader of the United Kingdom Independence Party (UKIP), and nominee for Time magazine’s person of the year 2016, took the British political scene by storm two years ago when UKIP won the UK European Parliament elections, securing an excess of four million votes and 24 seats.

The party gained its first elected MP at Westminster soon after, when Farage managed to negotiate the controversial defection of Conservative Party MP, Douglas Carswell, who knocked his old party into second place in a by-election.

Just two years later, and the rarely dull Eurosceptic movement had fulfilled its ultimate ambition when the British people voted to leave the 28-member bloc by a narrow majority in June’s in/out EU referendum.

The right-wing populist British Member of the European Parliament (MEP) mocked the European Parliament just days after the referendum result, saying: “When I came here 17 years ago and I said that I wanted to lead a campaign to get Britain to leave the European Union, you all laughed at me – well… you’re not laughing now, are you?” He has not gone quietly into the night in the months following Britain’s Brexit vote.

Indeed, after basking in the glow of a result, which saw the anti-EU majorities in England and Wales negate the pro-EU majorities in Scotland and Northern Ireland, Farage turned his attention towards events on the other side of the Atlantic.

There, he was invited to speak at a Donald Trump rally during the US presidential campaign. After the billionaire reality TV star’s shock victory in November, Farage became the first British politician to meet the president-elect. Trump, who was the one to be named as Time’s Person of the Year, caused the British government acute embarrassment when, in a November 22 tweet, he touted the UKIP man for the post of UK ambassador to Washington.

“He has become almost one of the things that seems to be very current in our politics – a political celebrity,” said James Mitchell, a professor of public policy at The University of Edinburgh.

“His celebrity status is interestingly higher now than it ever has been – even higher than in the Brexit referendum … The fact that Donald Trump tweeted that Farage could be UK ambassador – it would be the oddest thing in the world if a head of state gets a say in who should be another country’s ambassador – all feeds into Farage’s celebrity status,” Mitchell said.

The 52-year-old, who is fond of being photographed with a pint of beer or cigarette in hand (and sometimes both), has revelled in being the quintessential political outsider since he first took the reins of the party in 2006.

He gained widespread attention in 2010 when he accused then president of the European Council, Herman Van Rompuy, of having “the charisma of a damp rag” in an attack in the European Parliament.

His personal life, too, has been fraught: in his early 20s he sustained severe injuries when he was struck by a car, and not long after he was successfully treated for testicular cancer. On the day he made a failed bid for a Westminster seat in the UK’s 2010 general election the twice married father-of-four, whose current wife is German, was involved in a light aircraft crash and was dragged out of the wreckage.

But Farage, who stepped down from his role as UKIP leader several times only to re-take control of the party, saw his chances of securing an in/out EU referendum increase as his band of Eurosceptics began racking up support and eating into the votes of the Conservative Party.

In a bid to placate his party’s own Eurosceptic voices and to check the rise of UKIP, then Conservative British prime minister David Cameron called a UK-wide plebiscite.

Its result saw Cameron fall on his sword and Farage, who had been marginalised by the official Vote Leave camp during the EU campaign itself, proclaim an unlikely victory. For Farage’s admirers, Brexit catapulted the former London City trader into the realm of British political great.

“For those of us in UKIP and who have been in the Eurosceptic side of politics for 20-25 years, most of us have always had a great respect and knowledge and understanding of Nigel and what makes him tick and have always come to the conclusion that he’s a wonderful force of nature,” said John Stanyer, an English UKIP regional chairman.

Stanyer told Al Jazeera that Farage “was one of the greatest orators of our time, along with the greats of [former prime ministers] Tony Blair, David Cameron, Winston Churchill and Margaret Thatcher”, whose part in securing a Leave vote in the referendum “sent a great shock across the bows of the establishment”.

READ MORE: Who is the real Tony Blair?

“As the long-term figure head for the [Eurosceptic] movement, I think his standing around the world now has reached an all time high and is likely to remain there,” Stanyer added.

What next for Farage?

Many Britons, particularly Remain voters and campaigners, are not quite so enamoured with Farage, who, despite several attempts, has never been elected to the Westminster parliament.

They accuse him of stoking xenophobic sentiments in Britain – and point to his association with Trump, who repeatedly called for American voters to bring about a US-made Brexit of their own in the presidential election, as proof positive of his true political inclinations.

“Nigel Farage’s interactions with Donald Trump are astonishing and would be amusing if they weren’t so horrifying,” said Natalie Bennett, former leader of the Green Party of England and Wales, speaking to Al Jazeera.

“The idea that we would have Nigel Farage representing US interests [as British ambassador] and trying to impose them on the UK – he’s got the position of ambassador 180 degrees the wrong way round.”

Farage, who was replaced as UKIP leader on November 28 after standing down from the head of the party, which has been marred by infighting since this summer’s Brexit victory, appears to covet a more global position if his associations with Trump are anything to go by.

Yet, with seemingly zero chance of him assuming the job of top British diplomat in Washington, what of his future role?

“My sense is that it will be more in the celebrity stakes than in the political influence stakes,” said Mitchell.

“… I think he’s someone who’s had his day and he’s still in the limelight, but I think, perhaps, in time he will continue to have to do quite outrageous things to get noticed. But, of course, he still has some life in him as a celebrity so long as Brexit is an issue.” 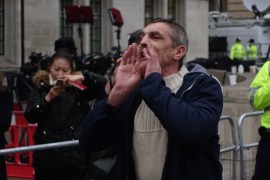 Brexit tensions play out on steps of UK Supreme Court 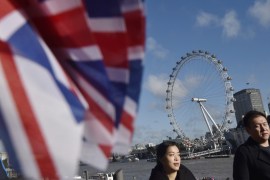 Leaked memo says UK government has no plan for Brexit

Leaked memo, prepared by a consultant, allegedly shows that British government has no formal strategy for Brexit.