Kinshasa, Democratic Republic of Congo – Tucked off a side road in Lubugi, a rough neighbourhood in the capital Kinshasa, barber Kris Bitenda puts the final touches on a client’s haircut.

“I consider myself an artist, and I am attracted to beautiful images,” he explains. “My tattoos express who I am.”

Since he got his first tattoo in 2012, the 35-year-old has covered his body in ink designs. Modern tattoo art is still not fully accepted in Congolese society; the markings are still seen as an imitation of Western influences, rather than remnants of the traditional African practice of body art dating back millennia.

Still, for their bearers, the designs are a way to share their past experiences visually.

According to anthropologist Lars Krutak, a research associate at the Smithsonian Institution who has spent more than two decades studying tattoos and indigenous tattooing practices, unlike the instability of the turbulent Democratic Republic of Congo (DRC)  with its continuously shifting political, economic and social climates – tattoos provide a sense of permanency and stability, forever imprinted on the skin.

Krutak views tattoos as a form of emotional healing, particularly after a traumatic experience, a necessary therapy for citizens of a country that has suffered millions of deaths since the onset of conflict that has lasted for decades.

“As permanent marks, [tattoos] can never be taken away, and the meanings they carry will remain with that person for the rest of their lives,” Krutak says.

Bitenda says he has lost count of how many tattoos he has, but the large imprint of a cat on his back, he says, best represents his story.

“I respect cats. A cat is clean; a cat is stable. A cat is smart in everything it does,” he says. “This is the type of life I try to live.”

As the end of Congolese President Joseph Kabila’s mandate looms over the country, the political situation remains tense in Kinshasa and beyond.

Still, life in Bitenda’s barbershop inches forward. A fan hums in the background, battling the humidity. Clients rotate through his barber’s chair.

“In my neighbourhood, tattoos are normal. If somebody judges me because of my tattoos, I will prove they are wrong about me,” Bitenda says.

In spite of the taboos surrounding body art, Bitenda made no attempt to hide his tattoos, and his markings are quite visible – even on his face. Others, however, prefer to hide their ink.

Such is the case right across town, where street kid-turned-radio broadcaster Cedrick Mukemwanga says he regrets his decision to mark his body a couple of years earlier. At just 13, Mukemwanga got his first tattoo at a roadside stand for just $2.

“I don’t like tattoos any more because I got them when I was homeless, surrounded by a bad group of friends who all had tattoos,” he explains.

He has since left that life in the streets behind him and is now a part of a community that generally disapproves of body markings out of deep religious convictions. As a result, Mukemwanga says he sometimes feels ostracised in his new community.

“When people see me with a tattoo, they don’t respect me. Even in Saint Joseph’s Church – where I pray – many Christians tell me that I should have it removed,” he says, looking at his feet. “I would get rid of them if I could.”

While the church doesn’t oppose tattoos in principle, Abbot Donatien Nshole Babula, the first assistant secretary of the DRC’s National Episcopal Conference, notes that this is more about the prevalence of Western influences among young Congolese.

“In a traditional context, tattoos are part of the culture,” Babula tells Al Jazeera. “However, in today’s society, the people who have them, like musicians or athletes, shouldn’t be role models.”

Despite the negative connotations associated with body art, modern tattoo art in the DRC stems from a long tradition of body modification in Africa. The earliest examples of the practice emerged from ancient Egypt.

“We first find artistic evidence of tattoos in Egypt on small clay female figurines that show images on their torsos, hips, and abdomens as early as 4000BC,” Joann Fletcher of the University of York, a professor specialising in mummified remains and ancient forms of body adornment, tells Al Jazeera.

Across the Congo Basin, tattoos have played an important role in the culture of indigenous groups such as the Baka, who adorn their faces with intricate tattoos. For them, such markings balance their features and enhance certain physical traits.

For Baka women, markings on the face, arms, and abdomen are considered fashionable. While men also have similar decorative tattoos, they also have smaller ones placed on particular points along their bodies – such as hands, wrists, and even between their eyes. They are believed to help them in hunting.

But today, though the tattooing has remained mainly an aesthetic practice, some younger people don’t consider their attraction to tattoos to be related to the ancient tradition.

“I am from the city. We don’t see many people with [tribal] tattoos, even in the villages,” says Bitenda. “It’s not modern, so I wouldn’t want to get one.”

Herve Kinfumu, a tattoo artist, prepares his kit for his next session. He lays out his tools on the table: sewing needles, a homemade motor, ink and a spool of string.

“I go wherever the client asks – my house or theirs. I always have all the tools ready so I can leave at a moment’s notice,” says the tall and lanky 25-year-old, dressed in a green T-shirt and skinny jeans.

After studying at Kinshasa’s Fine Arts Academy, Kinfumu wanted to pursue his dream of becoming an artist. With limited job prospects in the field, he decided to tattoo others, using human canvasses to display his creations.

“There are no official tattoo schools in DR Congo. It’s the school of the streets,” he tells Al Jazeera. Despite his lack of formal training, he claims to have tattooed thousands of people since joining the profession in 2006. The price for a design ranges from $5 to $50, depending on the size and colours.

Unlike his clients, however, Kinfumu’s skin is bare.

“I tattoo for the money. I personally don’t want one,” he says.

Most of Kinfumu’s clients are younger people who hear about his work through word of mouth. He believes his work means a lot to them as it commemorates past experiences, including trauma connected to the decades of instability.

Commemoration tattoos are a popular way to remember a loved one who has passed away in the DRC, and the art student recalls the story of a man who requested a portrait of his younger brother, who had been killed during a violent outbreak, to be tattooed on to his chest. The man struggled to hold back tears when he saw the final image.

“It was hard for me to see him like that, but I am glad that I was able to help him remember his brother,” he explains. “Their tattoos tell their story to the world.”

Fletcher agrees there is a connection between life’s uncertainties, such as death by disease or conflict, and a desire for something permanent.

“Whether in ancient times or now, in a world where we don’t know what’s going to happen tomorrow, there is an idea that [a tattoo] exists for as long as I live,” she explains.

In his living room in Goma, Blaise Kasereka Kihambu sketches the next addition to his tattoo collection.

The 28-year-old became addicted to self-tattooing after an armed group recruited him.

“I ask my brother to hide my tools. Otherwise, I’ll spend the whole day tattooing myself,” Kihambu jokes.

Chinese characters line the front of his forearm. Inspired by his love of Chinese-made weapons, the former child soldier translated the words into Chinese before tattooing himself. He is reluctant to provide details about his past that inspired his tattoos. He covers up his arm, saying, “My tattoos represent challenges I have overcome.”

But, he explains: “Life in an armed group isn’t easy – not everyone could survive that. When I read this tattoo, I remember everything that I went through without anyone else understanding,” he says. “It’s a secret message to myself.”

Since being demobilised, Kihambu has been unable to find steady work. He supports himself by tattooing others whenever possible.

At a luxury hotel across town, 25-year-old  rap artist Olivier “Fantastiko” Bayongwa searches for his fame, using body art to advance his career in a competitive music scene.

“As a musician, I am concerned about my public image,” he explains. “I got tattoos so that when people see me, they think it reflects my music.”

Bayongwa translated his Spanish-inspired stage name into Chinese characters in an attempt to be unique.

“I want to be seen as an international trendsetter. I believe that artists and musicians are guides in our society,” he says. “When someone sees that I have a tattoo, they will want to get one, too.”

Indeed, tattoos also have been regarded as a marker of status in millennia-old traditions, says Fletcher, visually demonstrating a person’s status within a community to others. In different ethnic groups, only certain genders or social classes were tattooed – such as the wealthy, who were marked as a sign of privilege.

“There has always been a desire to use body markings to express status within a particular community,” she explains.

But not everyone is a fan of Bayongwa’s body art. His parents and older brother were disappointed by his decision.

“My family was shocked when I got a tattoo. I am the only person in my family with one,” he says.

“But for me, I am the only one who has to like my tattoos. I have to live with them – not anyone else.” 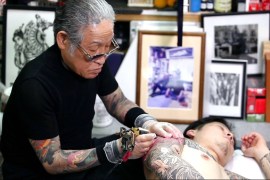 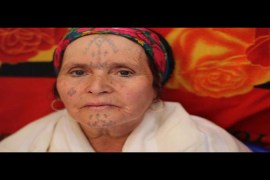 The last generation of tattooed women in Algeria is fading, but the tradition lives on in other forms.