US actress Carrie Fisher, who gained cult-like status as Princess Leia in the Star Wars films, has died aged 60.

Fisher, the daughter of the actress Debbie Reynolds and singer Eddie Fisher, died on Tuesday, four days after suffering a major cardiac arrest on board a flight from London to Los Angeles.

Her family gave no details on the emergency, but media reports said she had suffered a heart attack.

“Thank you to everyone who has embraced the gifts and talents of my beloved and amazing daughter,” her mother wrote on her Facebook page late on Tuesday.

“I am grateful for your thoughts and prayers that are now guiding her to her next stop. Love Carries Mother.”

Fisher made her feature film debut opposite Warren Beatty in the 1975 hit Shampoo. She also appeared in the hit movies Austin Powers, The Blues Brothers, Hannah and Her Sisters and When Harry Met Sally.

But Fisher is best remembered as the headstrong Princess Leia in the original Star Wars in 1977, her hair styled in futuristic braided buns.

She reprised the role in Episode VII of the series, Star Wars: The Force Awakens in 2015, and her digitally rendered image appears in the latest instalment, Rogue One: A Star Wars Story.

“She was extremely smart; a talented actress, writer and comedienne with a very colourful personality that everyone loved,” Star Wars creator George Lucas said in a statement.

“In Star Wars she was our great and powerful princess – feisty, wise and full of hope in a role that was more difficult than most people might think.”

Her Star Wars co-star Harrison Ford said in a statement: “Carrie was one of a kind … brilliant, original, funny and emotionally fearless. She lived her life, bravely”.

Fisher long battled drug addiction and mental illness. She admittedly smoked marijuana at 13, used LSD by 21 and was diagnosed as bipolar at 24.

In 1987, her thinly veiled autobiography, Postcards From the Edge, became a bestseller. It was adapted into a 1990 movie starring Shirley MacLaine and Meryl Streep.

She discussed the scandal that engulfed her superstar parents; her brief marriage to singer Paul Simon; the time the father of her daughter left her for a man; and the day she woke up next to the body of a platonic friend who had died of an overdose in her bed.

In the past 15 years, Fisher appeared as a television guest star, perhaps most memorably as a has-been comedy legend on “30 Rock”.

She also supplied the voice of a recurring character on the animated “Family Guy” for the past decade.

Carrie Fisher was smart, funny, talented, surprising, and always a hell of a fun time to be around. Family Guy will miss her immensely.

In a 2009 interview with The Associated Press, Fisher was not coy about revealing details about her life. She hoped to remove the stigma from mental illness.

“People relate to aspects of my stories and that’s nice for me because then I’m not all alone with it,” she said.

“Also, I do believe you’re only as sick as your secrets. If that’s true, I’m just really healthy.”

Besides her mother, Fisher is survived by her brother, Todd Fisher, and her daughter, Billie Lourd. 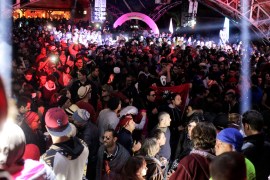 Thousands flock to movie sets in Tunisian dunes despite political and economic turbulence.