Bama, Borno, Nigeria – Boka Kanima, 56, made a living as a farmer here in Nigeria’s northeast until Boko Haram fighters captured his village.

The village, located near Banki, a district 128km from the state capital Maiduguri, continues to be under the control of the armed group.

Five days after he fled the area to seek shelter in a refugee camp in Bama, a town controlled by the Nigerian military, Kanima told Al Jazeera: “[Boko Haram] took all my belongings. They used to cane me every day for no reason.

Technically, we have won the war against Boko Haram

“If you do not follow their teachings, they slaughter you.”

Boko Haram had occupied villages close to his own for about two years, but the group routinely extracts tributes of grain and livestock from farmers in areas they control.

Because of this Kanima was left without any means to sustain himself or his family and saw no other option but to join the ranks of 1.7 million Nigerian people internally displaced (IDP) by the insurgency and escape to Bama.

The government is now suggesting that an end to the ordeal is in sight for IDPs like Kanima.

On Saturday, President Muhammadu Buhari made an announcement after the army destroyed Boko Haram’s only remaining camp in the Sambisa Forest.

“Technically, we have won the war against Boko Haram,” he said.

The news came just in time to meet the government’s promise of ending the rebellion before 2017.

This is not the first time the government has said that all known Boko Haram camps have been destroyed.

Since 2015, the Nigerian army has been forcing Boko Haram out of Borno’s urban centres as part of the ongoing and bloody Operation Lafiya Dole, resulting in scores of military personnel being killed.

Nearly 15,000 civilian have been killed since 1999, when Boko Haram launched a campaign to establish an Islamic state.

Boko Haram still occupies large expanses of the countryside and are prolific in the marshlands around Lake Chad, according to a security official from one aid agency.

Fighters have also regrouped in neighbouring Cameroon, Chad and Niger.

Speaking to Al Jazeera, Kyari Mohammed, an academic at Modibbo Adama University and a Boko Haram expert, said: “The possibility of resurgence exists, if the areas around the shores of Lake Chad are not liberated from [Boko Haram].

“Should the Multinational Joint Task Force up the ante, then there is definitely the possibility of an end to the conflict.”

The government, though, is adamant the fighters are finished as an occupying force in Nigeria.

Deaths caused by Boko Haram have indeed fallen from about 6,000 last year to an estimated 1,000 this year, but suicide attacks and ambushes persist throughout the region.

On December 11, two girls between the ages of seven and eight walked into a market in Maiduguri and blew themselves up.

Both died along with another victim and 12 civilians were injured. There are reports of some more attacks since.

Aside from the violence, Nigeria’s northeast suffers from a plethora of problems brought on by the conflict.

The area is going through a severe food crisis with 4.4 million people going hungry and 2 million in need of urgent food aid, according to the UN World Food Programme (WFP).

Marc-Antoine Perouse de Montclos, an associate fellow at Chatham House, a London-based think-tank, says the problems causing the food crisis are not limited to the armed group.

The deadly combination of a lack of food imports to the northeast from neighbouring countries, combined with Boko Haram’s extortion of food from locals, leaves civilians with little hope of finding enough food, he says.

“The army has closed the border with the Diffa region in neighbouring Niger … 80 percent of food production from Diffa goes to Nigeria … What’s the possibility for [civilians] to survive?” says De Montclos.

The loss of aid through corruption in the local or state governments is also a powerful factor. Only three out of every four trucks laden with food aid make it to their intended recipients, he says.

Improvement in governance is crucial to solving the food crisis and ensuring a lasting peace in Borno.

“You can’t promote resilience if the governments are not resilient,” says De Montclos.

The conflict and gnawing hunger have also had the effect of pushing 2.6 million out of their homes in the Lake Chad region to some of the poorest parts of Africa, and indeed, the world, dwarfing the refugee crisis in Europe.

Bama, where Boka Kanima took refuge, is itself emblematic of many of the problems relating to the displacement including the destruction of livelihoods and communities common to towns recaptured from Boko Haram.

Once home to just under 300,000 people, it was seized from Boko Haram in March 2015, but now the only signs of life are the patrolling pick-up trucks of the Nigerian army’s 21st Brigade.

Displacement has reduced the population to around 10,000 IDPs who live in a walled camp set up by the military. Many of the houses are destroyed and the only available food is from (WFP) handouts.

Kashimm Shettima, Borno’s governor, has earmarked 13bn naira ($4.1m) for the rebuilding of communities in the state and has set a goal for many of the inhabitants of Bama to return to the town by May next year.

Kyari Mohammed, the academic, said: “The post-Boko Haram rebuilding is even more daunting than defeating the insurgency.”

He believes disarmament, demobilisation and reintegration (DDR), and dignified return of IDPs to their communities is crucial.

The military will also need to adapt to a newly recaptured Borno. Beyond the towns and cities, they will almost certainly encounter problems sifting those still aligned with Boko Haram from civilians.

Another IDP in Bama who is 66 years old, and declined to be named, said: “When the army comes to the village the Boko Haram [fighters] run into the crowd so you can’t tell who they are.”

The psychological damage endured by Borno residents will also remain.

“Their teachings tell us we should kill our father or our mother,” Boka Kanima said.

“Even lions do not eat their own son … It’s a madness, complete madness. [Boko Haram] are devils, not human beings.”

But he is optimistic about the future. “Now I’m [in Bama], I am really excited,” he said.

“No sleepless nights. It’s like moving from the hot sun into the shade.” 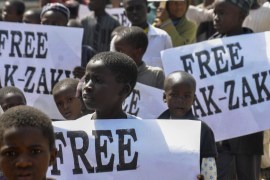 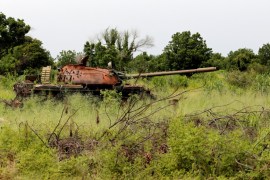