I’m sitting in a hotel in Harrisburg, Pennsylvania. I just watched the state’s electors, all 20 of them, decide to follow their state’s popular vote and give their all-important vote to Donald Trump.

The Electoral College was created by the founders in order to keep someone unqualified or under the influence of a foreign government from reaching the highest office in the land. Those opposed to Trump saw that as a no-brainer because they really don’t think he is capable of carrying out the duties required.

There were about 200 people protesting outside. It was just one of dozens of protests at state capitols across the country – a last-ditch attempt to keep Trump from making it into the White House. They failed here and everywhere else.  It’s now real, there is no stopping it. The billionaire businessman and reality TV star is going to be the next president of the United States.

OPINION: Speaking the truth in the post-truth era

There were two Trump supporters proudly flying a very large Trump flag. Many of the protesters tried to engage them in debate. I watched for a while, each and every one eventually walked away from the discussion. They were civil but talking in circles. I, of course, interviewed the Trump supporters. I was surprised by a couple of their statements.

Robert Cini, a retired factory worker, told me that former secretary of state Hillary Clinton outspent Trump five to one during the campaign. I informed him that simply wasn’t true. In fact, she did outspend him but by a two to one margin. He didn’t seem to believe me.

He told me that President Barack Obama has ruined the economy. I informed him the unemployment rate was about 10 percent when he came into office and was under 5 percent now. He laughed off my numbers and said they were not a real reflection of the situation. I asked him where he got his information. He told me he watches and listens to different programmes.

These are obviously shows that tell flat-out lies, but that is perfectly fine in the United States. The first amendment protects all speech. The thought of having a licensing board to make sure the truth is being told on the airwaves here would never survive a court challenge.

That got me thinking, where do we go from here? Clinton received almost three million more votes than Donald Trump. A recent poll found 52 percent of Republicans still don’t believe that is the case. They think Trump won the popular vote.  He didn’t. It seems, though, that facts are now up for debate.

I believe the American media is a big reason why Trump is going to be president. Every single time he talked he was put on the air. He received billions of dollars in free advertising. His opponents barely got on TV or in the newspapers. In the beginning much of what he said wasn’t fact-checked. It was good for ratings. He made their bosses money.

Towards the end of the campaign, journalists started fact-checking but his voters were no longer listening. The media was largely irrelevant in this campaign and that is new. I was struck by what the editors of Time magazine wrote when naming Trump person of the year. They wrote in the introduction that Trump reminded everyone that “truth is only as powerful as the trust in those who speak it”.

How can the American media change the perception of so many that they are deceitful hacks? There is no easy answer. Social media has changed the landscape. On the internet it is easier to make fake news look like the real thing. So what now, American media?

The only thing I can think of is to keep working, but be better. If an American television network wanted to begin regaining the trust of viewers the first thing it should do is move their headquarters out of New York City. New York does not resemble the country at all. It’s a bubble and if you are in a bubble you can’t hear anything happening outside it. They need to stop paying their anchors and bosses millions of dollars.

Edward R Murrow worried about that. He asked how can you relate to Americans if you aren’t experiencing what they do on a daily basis. Journalism needs to be a calling again, not a way to gain “celebrity”.

My thesis in graduate school was on the historical and cyclical nature of sensational journalism. The premise was that whenever new technology made news available to the masses, sensational journalism thrived. Historically, a major disaster or world event brought serious, real news back to the top of viewers’/readers’ attention.

If Donald Trump doesn’t deliver, his voters may return to traditional news. If they do, the American news media needs to be ready. They need to be better. They need to stop trying to curry favour and cover the “easy” story, the horse race, etc. They need to cover the issues that people care about and to do that they need to know what those are.

They need to challenge more. They need to hold the powerful to account. If they do that, if the people come back into their fold, journalism might matter again. Facts might be exactly that, facts. If not, then we will enter a new stage of this republic. The fourth estate, the final check on the checks and balances will disappear. What does that mean? I truly hope we don’t find out. 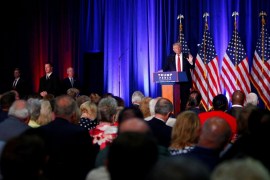